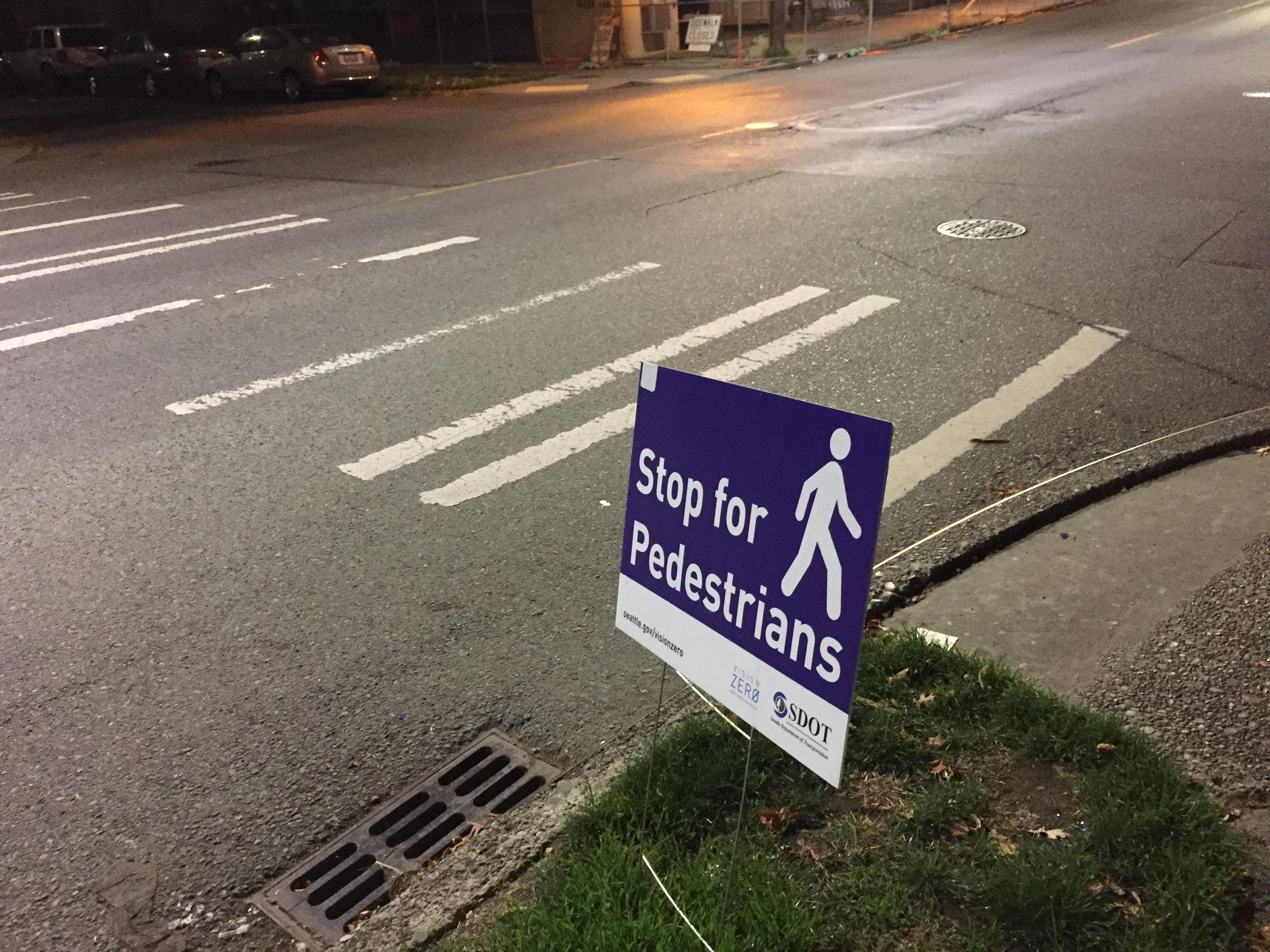 A 1.7-mile corridor in Northeast Seattle is getting major street improvements in 2016. Though billed as a repaving project, the Roosevelt corridor improvements will also improve the overall conditions of the street by enhancing walking, biking, and transit infrastructure. The Seattle Department of Transportation (SDOT) plans to begin work in February, which may last through summer, and will focus the project in eight key areas:

As the cross-section above suggests, the typical street layout (west to east) will consist of a bike lane, protective buffer, two driving lanes (one shared with buses), and a parking lane. Infrastructure for bikes and protective buffers will result in parking being removed from the western side of the street. The typical bike lane will be 7 feet wide with a 5-foot protective buffer. The type of buffering will dependent upon location, but will ultimately separate fast moving traffic from bikes. Buses will share an 11-foot lane with motorists, but they will stop in-lane at transit islands along the corridor. Another 10 feet will be dedicated to general traffic. And the easternmost 8 feet of Roosevelt will remain as on-street parking, except where pedestrian improvements are planned.

The intersection at NE 63rd St is an example where SDOT will pour new concrete on the east side of the street to constrain vehicle movements. Curb bulbs will extend about five feet into the street narrowing it further and providing new ramps for pedestrians in multiple directions.

The intersection at NE 58th St is similar to NE 63rd St, except that the east side of the street will receive a long curb extension. This will narrow the main portion of Roosevelt substantially and make it easier for pedestrians to cross.

NE 57th St will use a different approach to extending the curb. Instead of concrete, SDOT plans to use paint and plastic posts to demarcate the curb. The result is still a narrower street and easier crossing conditions for pedestrians.

Last year, SDOT added protected bike lanes on Roosevelt in preparation of the paving project. Those new bike facilities were installed between NE 45th St and NE 40th St; it’s a short five-block stretch. But, SDOT will further extend the protected bike infrastructure northward to as far as NE 65th St. With another 20 blocks in hand, bicyclists will essentially have 25 blocks of continuous protected bike facilities along the corridor.

SDOT will use a variety of techniques to provide protected bike lane facilities. New green paint will be placed down on much of the corridor to give better visibility to the bike facilities. Small concrete islands will give truly separated space from lanes dedicated to motorized vehicles. Plastic posts will be used in other locations to demarcate the bike lanes. And in some cases, the bike lane will pass behind transit islands.

Further south along the corridor, SDOT plans to fill in a major gap between NE 40th St and the University Bridge. New bike lanes will be clearly marked on the street with green paint to ensure that drivers know not to merge into likely on-coming bikes. These improvements will be provided in both directions instead of just southbound.

SDOT plans to use two primary strategies to improve transit flow along the corridor:

Both sets of transit improvements are specifically targeted to complement future RapidRide+ service that SDOT is currently planning for the corridor. Coupling them with a repaving project is a wise way to get early delivery of larger program goals and to test out service concepts like bus islands and elevated pathways for bikes and pedestrians.

The project could go a step further to make the corridor project safer for all. Certain stretches of the corridor experience higher speeds and often negligent motorists. One stretch that is a constant problem in this respect is NE 45th St to the University Bridge. Only one intersection between these points has a stoplight (NE 42nd St). Complicating this further, the grid along this portion of Roosevelt is broken with partial intersections making the street inconsistent with turning and crossing movements, and the street bears downward as it approaches the bridge. Unsurprisingly, motorists often pick up speed rapidly to cross through the neighborhood with total disregard for pedestrians and bicyclists.

When SDOT added the protected bike lane on the street last year, it resulted in the removal of on-street parking and trimmed the width of the street down. Motorists generally responded to this by slowing down and moving less erratically along the street1. And motorists were more likely to yield, presumably due to better line of sight and pedestrians being able to walk further into the narrowed right-of-way. SDOT now plans to add a new crosswalk on the south side of the NE 43rd St intersection, and extend the eastern curb a quarter block further south narrowing the street. These are both great changes, but they’re not enough.

Raised crosswalks are a necessary addition to the street to ensure that motorists yield. Anything less is an invitation for motorists to continue hitting pedestrians and bicyclists along this stretch of Roosevelt. Raised crosswalks aren’t needed everywhere, but they should be located at targeted intersections to reduce speeds and provide greater accessibility to those with mobility challenges.