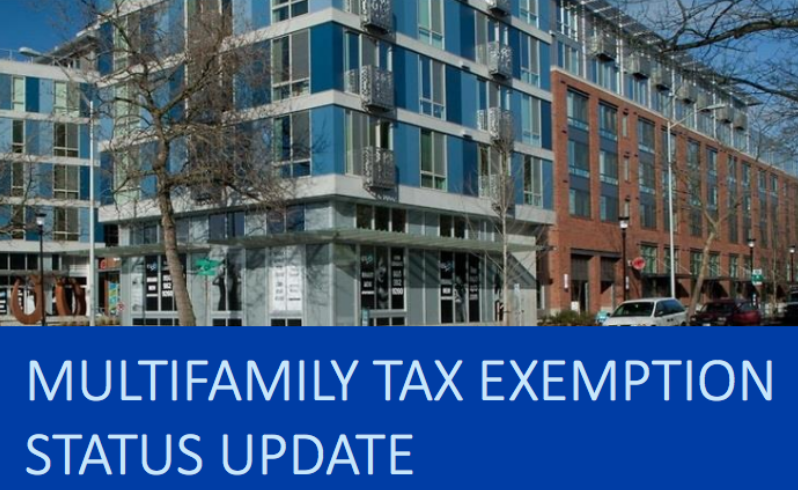 The Office of Housing gave their thrice-annual progress report on the Multifamily Tax Exemption (MFTE) program to the City Council last month. The report analyzed the timeframe of January 1st to April 30th and highlighted shifting trends in the program, most evident by an increase in the number of projects participating in Family Size Unit Program. The total of new affordable housing projects entering the MFTE program was similar to the September to December timeframe in 2015. 11 MFTE applications were approved in the first trimester of this year versus 12 at the end of last year. However, the total number of MFTE restricted affordable units was down slightly 34 units.

In total, projects approved for the MFTE program would add 1,084 units of which 222 would become both income-restricted and rent-restrict for 12 years, leaving the remainder to market-rate pricing. This translates to about 20.4% of all units set-aside as restricted affordable units. One project entered the program under the older Program 4 conditions while 10 projects were approved under the newer Program 5.

Encouragingly, nine of the 10 projects approved under Program 5 met the standards for the Family Size Unit Program, that being project with four or more 2+ bedroom units set-aside as restricted affordable units, showing strong participation by developers in contributing family-sized units. And an important note, all of the approved projects are sponsored by private developers with the intent to become exclusively rental units.

The following is the total breakdown of units approved as standard units and restricted affordable units under the MFTE program:

The City Council reauthorized the MFTE program last fall and in doing so made revisions to where it is applicable and the amount and kind of units that qualify. The Office of Housing refers to this reauthorization as “Program 5” since it is the fifth generation of the MFTE program.

Adoption of Program 5 expanded the geographic area of the MFTE program to all parts of the city where multi-family residential is permitted by zoning. In the first trimester of this year, the Office of Housing approved two projects in Ballard and the Central District because of the geographic expansion, netting 27 MFTE units alone. Neither project would have qualified under Program 4.

Program 5 also made substantial changes to the parameters of qualifying unit amounts and types. A two-tier system was created by establishing a Family Size Unit Program and a Small Unit Program. There are three primary differences between the two programs:

The Office of Housing says that developers are electing to participate in the MFTE at desirable rates and on par with previous years. Right now, the participation rate for eligible projects is about 50%. Office of Housing staffer Emily Alvarado explained the calibration of the program in this way:

The Office of Housing looked at “Year Seven” buildings in the MFTE program to see if units are still delivering significant rent savings at Year Seven compared to Year One.

In our annual report, we had one property that is currently in Year Seven of the 12-year MFTE period. It’s Alley 24 and we looked at the rents in that property. But since it was only one property, we looked at Dupre + Scott data. And it shows that in Year Seven buildings are still having rents that are comparable to market-rate rents on Year One of a building. They’re retaining a lot of their high rent value. And so we continue to get significant rent savings off of the properties, off of the units in Year Seven.

What those rent savings are: they are on average for studios $6,000 a year for a tenant and for the one-bedroom or two-bedroom units they’re more than $7,000 a year for a tenant. So that’s the delta between market-rate rents in new construction buildings and the affordable rents that are regulated under MFTE.

Update 6/1/2016: The Office of Housing says that the market-rate to restricted affordable unit ratio is actually similar to the previous time period. Unfortunately, the February progress report did not break approved project types down by whether they were sponsored by private developers or non-profit developers to parse the data. Todd Burley, Communications Director, explains:

So there goes any theory on substantially changed market conditions.