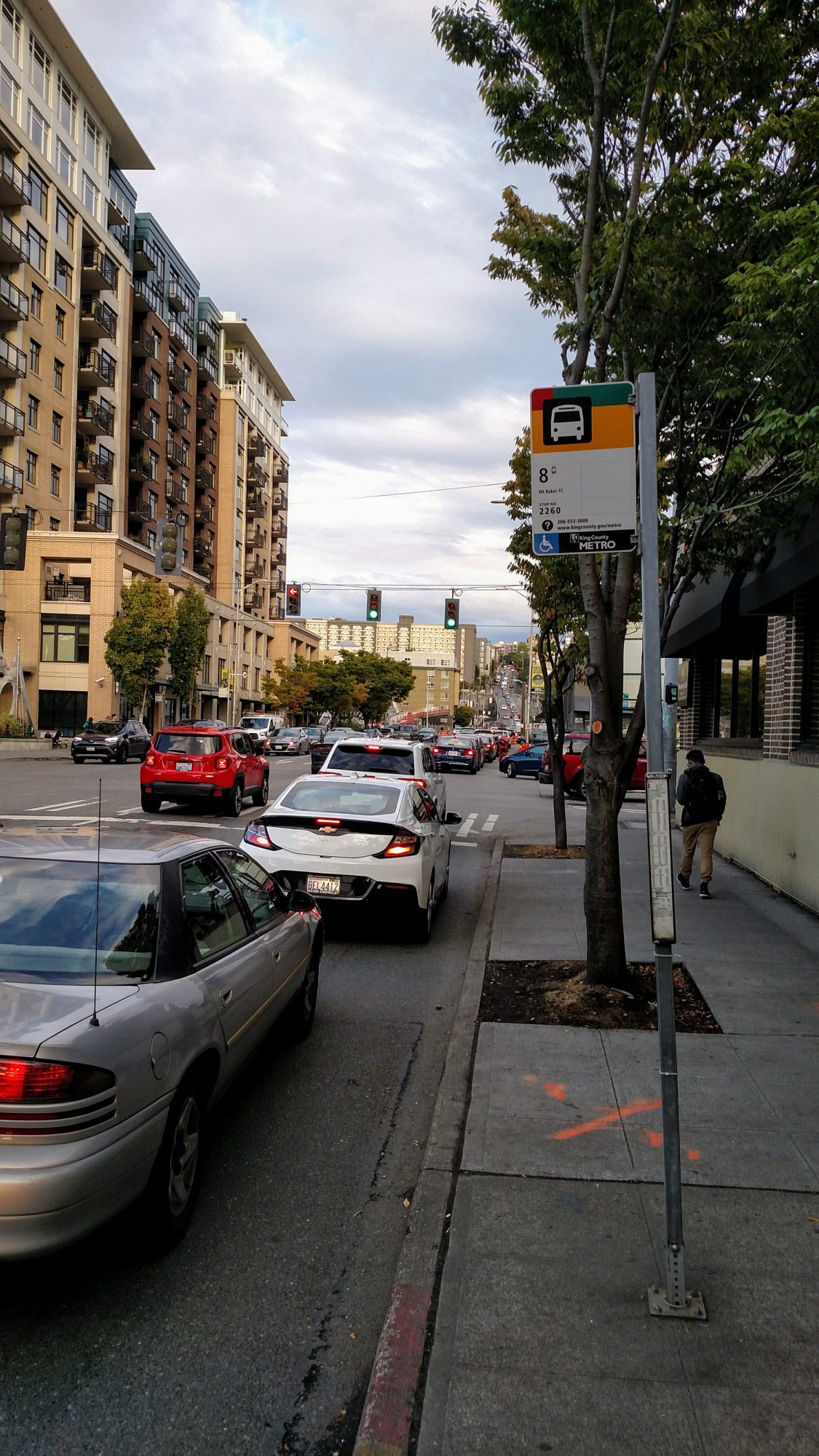 I rode the Route 8 last week, confirming it’s as late as ever during the afternoon commute. At a brisk walk from Dexter Avenue, one can easily pass two Route 8 buses on the way up the hill. Somehow one of the state’s densest and fastest growing job centers in South Lake Union is not well connected to one of its densest population centers: Capitol Hill. It’s a point of anguish for Seattle transit riders–who grace the 8 with about 10,000 rides per day despite its snail’s pace.

The good news is that the City is soon enacting changes to help the Route 8 avoid some of the congestion that plagues it. Seattle Department of Transportation (SDOT) has planned an eastbound dedicated lane between Fairview Ave N and Stewart St and queue jumps in key spots. You can read more details about this proposal from The Urbanist coverage earlier in this year. The red bus lane will be sandwiched between a left turn lane and a new right turn lane for Yale Avenue and its precious I-5 access. SDOT will find the extra eastbound space by removing a westbound lane, which it says will have minimal impact on travel times.

The new bus lane will be painted this week, piggybacking on Denny Substation construction. SDOT will implement the full package of Route 8 upgrades by early 2018. Expanded bus stops on Olive Way and E John St should help buses having to leave and re-enter busy traffic on their way up the hill and provide more space and amenities for waiting passengers, Metro claims. The agency also promises new shelters, benches, and better lighting at several Route 8 stops.

Denny Way sorely needs dedicated transit lanes to liberate commuters from grinding gridlock. The road carries about 30,000 car trips per day, according to average annual traffic numbers from 2015. SDOT would likely want to see lower volumes before taking away a general purpose lane in the congested eastbound direction. However, east-west traffic is going to change dramatically when John and Harrison Streets are reconnected. They are currently blocked by Aurora Avenue’s at-grade divided highway design. This may ease pressure on Denny Way by providing alternatives but Harrison and John are also going to be major transit and bike routes. We can’t squander this opportunity.

In 2013, SDOT finalized a plan attempting to chart a bright future for Denny Way, but just four years ago lane reconfiguration wasn’t imagined.

It is assumed that travel lanes on Denny Way will continue in their current format. No dramatic roadway reconfigurations were studied or proposed. This is consistent with Seattle’s ongoing Urban Mobility Plan, a system-wide transportation study related to viaduct and seawall replacement. No reconfiguration of Denny Way was proposed in the Urban Mobility Alternatives, or the preferred Viaduct replacement outlined by elected officials in January, 2009. It is assumed that Denny Way will continue as a Regional Connector street with high traffic volumes in the 30,000 ADT range.

Plans like these can create a bureaucratic morass. A new plan refers to an old plan that eliminated a big idea in order to continue dismissing the big idea. Thus, we can’t have big ideas! Someone has to step out a limb. The publicly owned right-of-way on Denny Way is 66 feet wide, which is still plenty to dream big. And, in fact, just a few years after SDOT wrote no big reconfigurations were studied or planned, it was implementing an eastbound dedicated bus lane.

The question is where the brief bus lane will be enough to keep the Route 8 moving and less late. We could go further. Two center-running dedicated transit lanes would free the Route 8 from the traffic standstill that sets in every afternoon. This might become more or less appealing once the changes SDOT has planned get a chance to do what magic they can.

The status quo is bad for everyone. People walking encounter sidewalk closures and the noise and pollution of automobile traffic. People riding transit wait and wait and wait. People biking find no space here. And people in cars aren’t getting anywhere very fast either–although they do consume considerable space in the process. It shouldn’t be this hard to travel on Denny Way.

As the Denny Way corridor adds 10,000 homes and likely triples in population within a decade, we need the street to work more efficiently. Although, light rail is on the way–Ballard Link will put a station near Denny Way and Westlake–its opening isn’t promised until 2035. The reconfiguration is a good first step; the neighborhood deserves a great crosstown bus route.

A Plan To Fix The Perpetually Late Route 8