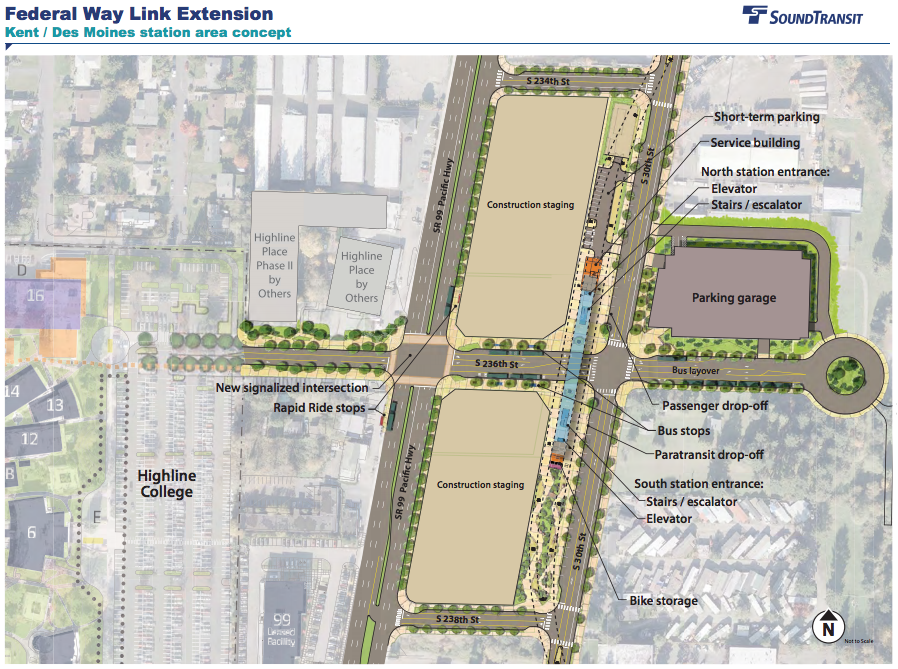 Light rail will extend as far south as Federal Way in 2024, serving approximately 36,500 daily riders. Sound Transit is working to design the look, feel, and function of the three stations that will dot the 7.8-mile extension stretching from Angle Lake Station to Federal Way. Three station concepts were shared with the public in August and September. Sound Transit sought early feedback for design priorities before getting too deep into the station design process. A few key themes rose to the top from public feedback:

The context for each of the three planned Federal Way extension stations is very different. The priorities raised by the public will ultimately be partially reflected in station designs, but there are other foundational aspects that will likely drive the different outcomes.

The Kent / Des Moines station will be located within Kent just east of Highline Community College and south of the SR-516 and I-5 interchange. The site is somewhat challenging given that it will also be hemmed in by SR-99 and I-5. Kent and Des Moines worked together earlier in the planning process for a transit-oriented district known as “Midway”–a reference to the old landfill in the area–that will benefit from the light rail investment. The city has also adopted specific station site design requirements that Sound Transit must meet, such as:

Sound Transit has worked through some of these early issues like developing a plan to address the requirement for ground floor retail in the proposed parking garage and creating a usable public space beneath the elevated guideway. The elevated station itself is proposed to straddle S 236th St just west of 30th Ave S. Direct access to the station platform will be via stairs, escalators, and elevators at either end. Two large sites will be necessary for construction staging and conceivably will eventually be surplused for transit-oriented development, particularly for affordable housing.

General site access to the station is planned to include a variety of other improvements for those walking, biking, busing, and driving. The pedestrian environment will get a major upgrade with wide east-west sidewalks, planter strips, and curb bulbs to make crossing streets easier and more comfortable. An east-west connection for pedestrians and other modes will be made across SR-99 to the Highline Community College campus. New bus stops for local routes will be added to S 236th St between the station and SR-99 in additional to the RapidRide A Line stops on SR-99. Similar to other surburban stations, Sound Transit will provide structured parking at the station site for approximately 500 parking stalls. And bike improvements could find their way into the mix, too.

Residents near the Kent / Des Moines station are pushing for a design that is “bright, colorful, and welcoming,” according to Sound Transit. Another priority in station design includes fashioning the look and feel to match the college atmosphere of the Highline Community College students and growing Midway community.

The Star Lake station at S 272nd St is also located in Kent, but the context there is vastly more constraining for transit-oriented development. The station is planned at the Star Lake Park-and-Ride, which is just north of S 272nd St and west of I-5. The area to the north and west is heavily encumbered by wetlands and critical areas. However, the local area does have some medium density multifamily residential and commercial uses in proximity to the site. Despite a connection under I-5 to the east, the areas most likely suitable for transit-oriented development is on the station site itself and Woodmont area near SR-99 to the west.

Sound Transit, however, has not prioritized transit-oriented development at the station site instead seeking to max out the property a structured garage for 1,100 parking stalls, open space, and elevated station facility. This is actually relatively reflective of the priorities identified by residents who want “lots of lighting and a safe, welcoming station, and parking structure,” Sound Transit says. The design concept also seems to check another box by emphasizing landscaping that melds into the nearby woods.

In terms of site access, Sound Transit appears likely to improve vehicular access for parking and kiss-and-rides. The site will also get upgrades to encourage bus transfers from local routes. The proposed location of the elevated station will likely make it challenging for most pedestrians who want to walk to and from the station in the area.

The last stop on the extension will be in the heart of Federal Way. Sound Transit is proposing to locate the station near the corner of S 320th St and 23rd Ave S, both main thoroughfares in the big box retail and strip commercial district. This about two blocks further south than the existing Federal Way Transit Center. The planned station site will likely mean the acquisition of six to seven blocks of land for construction staging in addition to right-of-way for elevated guideway. The result of this could be a new local grid and transit-oriented development sites with midrise and highrise zoning in place.

Sound Transit will keep the existing parking structure at the transit center and remove the bus bays in favor of new ones on streets closer to the proposed station. An additional 400-stall parking garage is planned to be built in the station area. The station itself will encompass a half-block-wide site stretching nearly three blocks in length. Programming for the station site could include plaza space, pick-up and drop-off areas, bus stops, and other station amenities. Residents have expressed a desire for the station to be designed as a “social and dynamic” place that uses light and color similar to the architectural language of the new nearby Federal Way Performing Arts and Events Center.

Design work is expected to continue through mid-2019 with construction on the extension beginning later that year. More design milestones on the extension should come next year with finer grain details along the way.