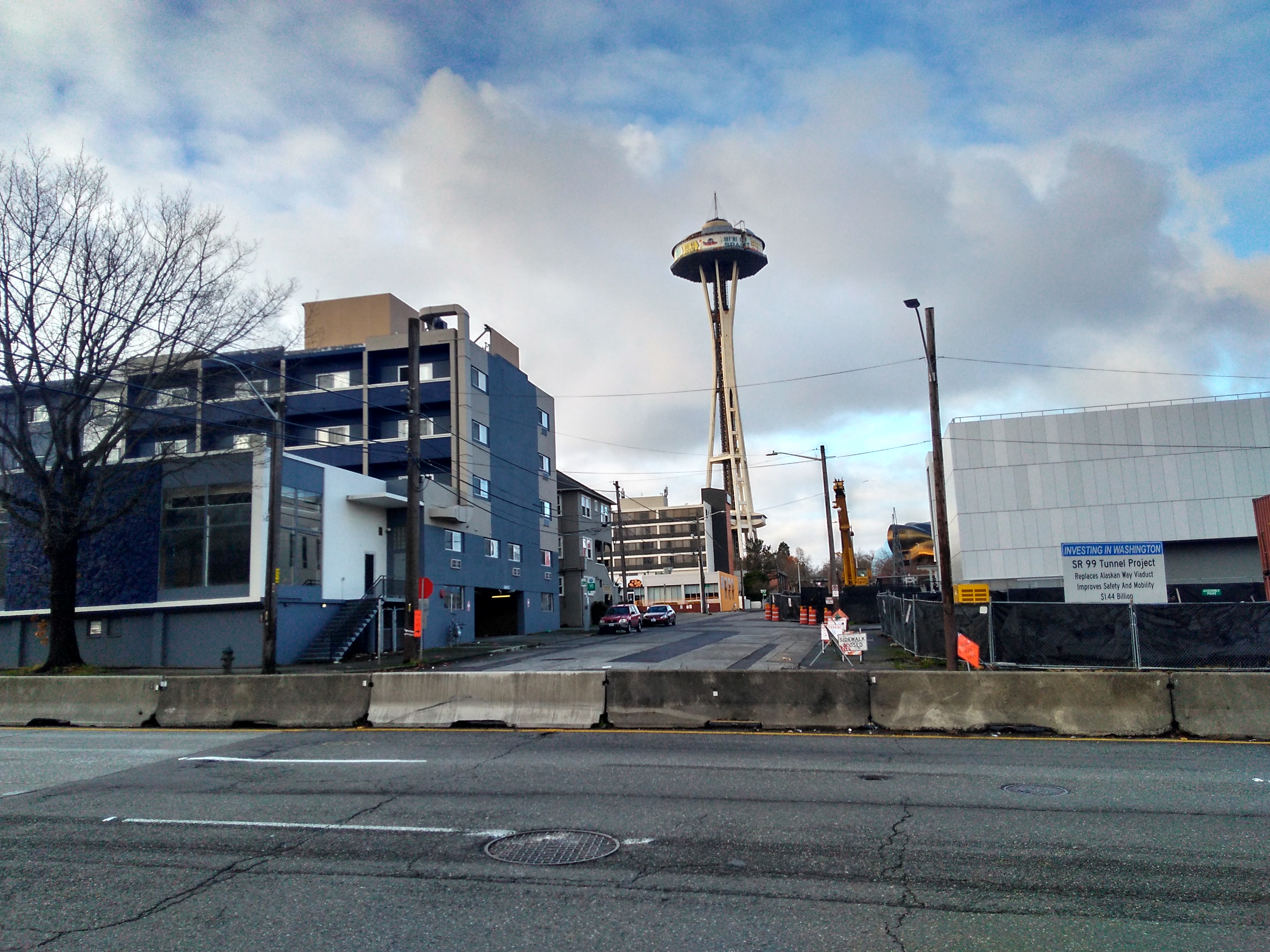 As soon as Seattle’s SR-99 tunnel opens in 2019, work will begin to de-highway-ify Aurora Ave N south of the tunnel portal in South Lake Union, converting it from a heavily used arterial with no cross-traffic at the side streets to a neighborhood street with traffic lights at every intersection. Exactly how traffic patterns will change when this happens is not exactly known: will drivers looking for a way around Denny Way and Mercer Street clog the streets between Seattle Center and I-5, particularly during brutal rush hours?

What is known is that returning Aurora Avenue to the street grid will have enormous consequences for the environment in South Lake Union and what can, for lack of a better term, be called the Seattle Center area. The streets between Aurora Avenue and Seattle Center really don’t feel like they are part of any neighborhood, mostly due to the busy streets that cut the area off from elsewhere in the city.

In 2011, Walking in Seattle gave its first Worst Intersection in Seattle award to Aurora Ave N between Denny and Mercer. If you’re on foot, or on a bike, there is no way to breach the barrier that is the current State Route 99 through one of the fastest growing neighborhoods in Seattle. With the re-creation of the street grid, all that will change. People on foot will be able to use any of the side streets to walk between South Lake Union and Uptown.

According to the street concept plan for this area that was developed by the City of Seattle, Thomas Street is intended to be the most neighborhood-oriented street of the ones planned for reconnection. It connects to Seattle Center right at MoPop and the back entrance to the Space Needle and provides an ideal place for a pedestrian connection. The street concept envisions a lot of ways to make the corridor even better for pedestrians: limited on-street parking, wide sidewalks, and ground floor retail. This is already coming together in South Lake Union, but it will take the reconnection to really spur development on the other side of Aurora.

The concept plan also calls for bike lanes on Thomas Street. But the one thing that is needed to really cement Thomas Street as a pedestrian and bicycle corridor is low vehicle traffic volumes. Unfortunately, there may not be enough room for bike lanes on Thomas to be protected given the size of the street and the retention of vehicle traffic in two directions. So traffic really needs to be kept to a minimum for people to feel comfortable cycling there.

Many advocates, namely key staff at Seattle Neighborhood Greenways and the Cascade Bike Club, were encouraging the Seattle Department of Transportation (SDOT), when negotiating the concepts for Thomas Street across Aurora, to push for a way for traffic to be diverted off Thomas Street to keep traffic volume low. And they listened.

In November, at a workshop for the North Downtown Mobility Action Plan, SDOT’s comprehensive planning effort coordinated around both One Center City and KeyArena transportation planning, SDOT staff circulated the most recent draft plans for Thomas Street’s reconnection, and it showed all vehicle traffic will be forced to turn right off Thomas Street when they get to Aurora Avenue coming from either direction, while bikes will be able to travel straight across.

This is a really encouraging step on the road to a fully connected South Lake Union: it shows that SDOT gets that diverting traffic off Thomas Street will benefit the street for people and provide safer connections. Other transportation projects in the area have seemed to prioritize single occupancy vehicles over other modes, so this looks like a big step in the right direction.

It is important to note, though, that this is really the minimum we could be doing here. Instead of five-foot bike lanes, what if Thomas Street was a one-way shared street in the direction of Aurora, with a contra-flow bike lane in the opposite direction? Another traffic diverter in South Lake Union could help keep vehicle volumes low enough for this to function well.

A traffic diverter on Thomas Street is a big win for safe street advocates. Pushing the city even further to create a truly unique corridor through South Lake Union to Seattle Center could fundamentally alter how our city works for us.

The Beginnings Of A Post-Viaduct Aurora Ave N