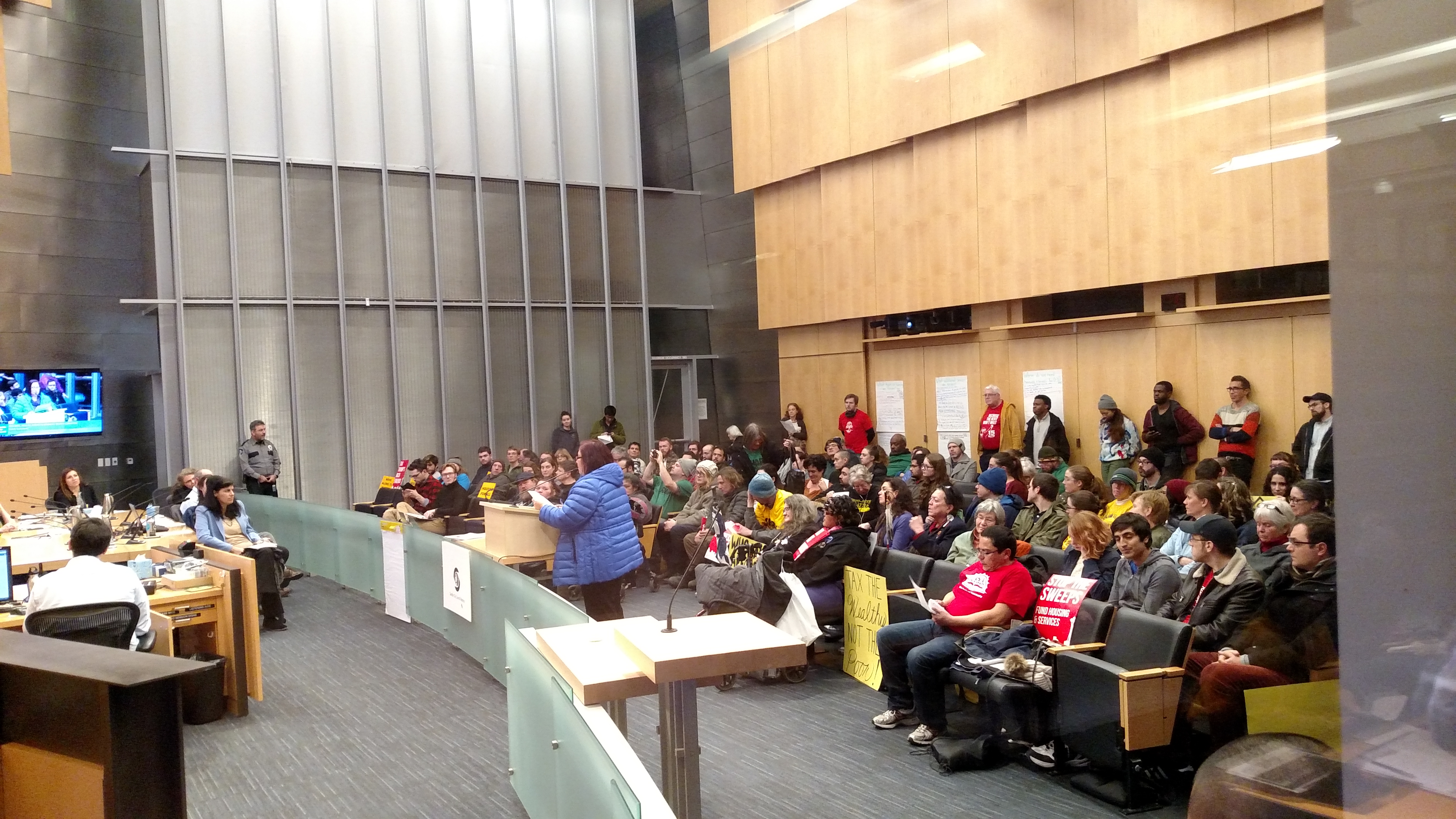 One person speaking to that need was Rep. Nicole Macri who represents the 43rd District in Olympia and serves as Deputy Director at Downtown Emergency Service Center (DESC), which is one of Seattle’s largest supportive housing providers. Rep. Macri warned against getting complacent with how much money we’re investing and with how many affordable homes we’re producing.

“We need to get comfortable with much bigger numbers,” Rep. Macri said.

As a special meeting of the Housing, Health, Energy and Workers Rights Committee, Chair Mosqueda led the proceedings with Councilmembers Lisa Herbold, Mike O’Brien and Kshama Sawant also in attendance. The councilmembers heard testimony from experts, mixing in their own commentary before handing it off to public comment. The Seattle Transit Riders Union (TRU) organized the event and arranged the panel.

In her presentation, TRU General Secretary Katie Wilson estimated the housing gap at 30,000. With more than 30,000 people in need (e.g., severely rent burdened or homeless) across the Seattle metropolitan area, local cities and counties would need to raise $5.1 billion to build 30,000 apartments to make up the housing gap and permanently house everyone, she said. To accomplish that, we’d need to invest $500 million per year for 10 years. Wilson pointed to several  ongoing megaprojects to show we’ve made this kind of investment before.

“When we care about something we find a way to do it,” Wilson said. “There’s big expensive capital projects that go on all the time. There’s a few going on now. There’s the [Alaskan Way Viaduct Replacement] tunnel. There’s the Washington State Convention Center. So the fact that these are big numbers doesn’t mean this is something we can’t tackle.”

The Alaskan Way Viaduct Replacement tunnel project may push $4 billion when all is said and done, while the Washington State Convention Center Addition is expected to cost $1.6 billion.

At the meeting, Councilmember Sawant revived her proposal to institute an employee head tax to fund affordable housing and upped the ante. Her latest proposal suggest setting the tax high enough to raise $200 million per year, which she said could finance the construction of one thousand affordable homes annually.

“[T]he decisions of the City Council cannot be based on what big business finds palatable, and instead must be rooted in what is needed by working people in this city,” Councilmember Sawant said in her press release. “These same big corporations are currently celebrating the windfall of Trump’s corporate tax cuts, and can certainly afford to pay if the City Council and Mayor demonstrate the backbone to pass a strong progressive business tax. Other revenue sources can and should be added, but we cannot allow vague promises of other, later progressive revenue as a ruse to avoid bringing in real revenue that is on the table right now with this proposed legislation.”

Councilmember O’Brien agreed that Trump corporate tax cuts were an opportunity to capture that corporate windfall as revenue for the City.

The reduction in the corporate tax rate also means that the Low Income Housing Tax Credit (LIHTC) has become less effective since corporations have less tax liability to write off and thus use LIHTC less. The LIHTC is America’s number one funding source for new affordable homes, so weakening it will deprive affordable housing developers of much needed funding. A slowdown in LIHTC funding is already apparent as banks and corporations adjust.

Both expert and public testimony focused on the urgency of the need, increasing the scale of solutions, and the availability of resources to do so if we’d only grasp them. A full video of the committee meeting with public testimony is available here. Additionally, Capital Hill Seattle Blog published some takeaways from testimony here.

"This is a manufactured crisis." Alison Eisinger of Seattle King County Coalition on Homelessness said. We needed to invest more in affordable housing in past decades and now we must play catchup. #HousingForAll

Rep. Macri highlighted that restrictive zoning could inhibit a plan to dramatically increase affordable housing production and suggested zoning more land multifamily would be helpful. As Seattle continues to boom, develepable land zoned multifamily will become an increasingly rare commodity in a city where more than half the buidable land has detached single family zoning. Single family zones have rarely hosted new housing affordable to middle-class households, let alone low income ones, as this map of housing prices by Sightline demonstrated.

Both Rep. Macri and Councilmember Mosqueda emphasized the need to build larger affordable projects to make the best use of increasingly expensive land. Thinking bigger would mean upzoning in some cases and encouraging nonprofit developers to get comfortable working on that scale. It’d also mean better utilizing public land.

“We should not be selling city-owned land into the speculative real-estate market,” Rep. Macri said.

Councilmember Mosqueda also emphasized making better use of publicly owned land; in fact, she floated a temporary moratorium on public land sales at a Welcoming Wallingford meeting earlier this month. The ability to offer land at below market rates to affordable housing developers helps larger projects pencil out as feasible. Bellwether Housing and Plymouth Housing pointed to free public land as instrumental in making their 13-story affordable housing proposal for First Hill work.

One promising sign is the 13-story tower proposed by @_Bellwether and @PlymouthHousing. It would be the first affordable highrise built in Seattle in more than 50 years. #HousingForAll https://t.co/tfSlrgcmD1

Another policy discussed was rent control. Councilmember Sawant reiterated her support for rent control saying a $100 increase in rent is associated with a 15% increase in homelessness. The state ban on rent control would need to be lifted before Seattle could enact such a policy. Rep. Macri authoried a bill to lift the ban, but it’s didn’t make the cut for consideration this legislative session, but it may be revived next session.

"We need rent control" @cmkshama said. Rep. Macri did propose a bill to lift the Washington State's ban on rent control, but that bill didn't make the cut this session. #HousingForAll https://t.co/LDQZpZxnfR

With its recommendation and report to City Council due March 1st, the Progressive Revenue Task Force has some big decisions to make this week. Advocates are pushing them to go big.