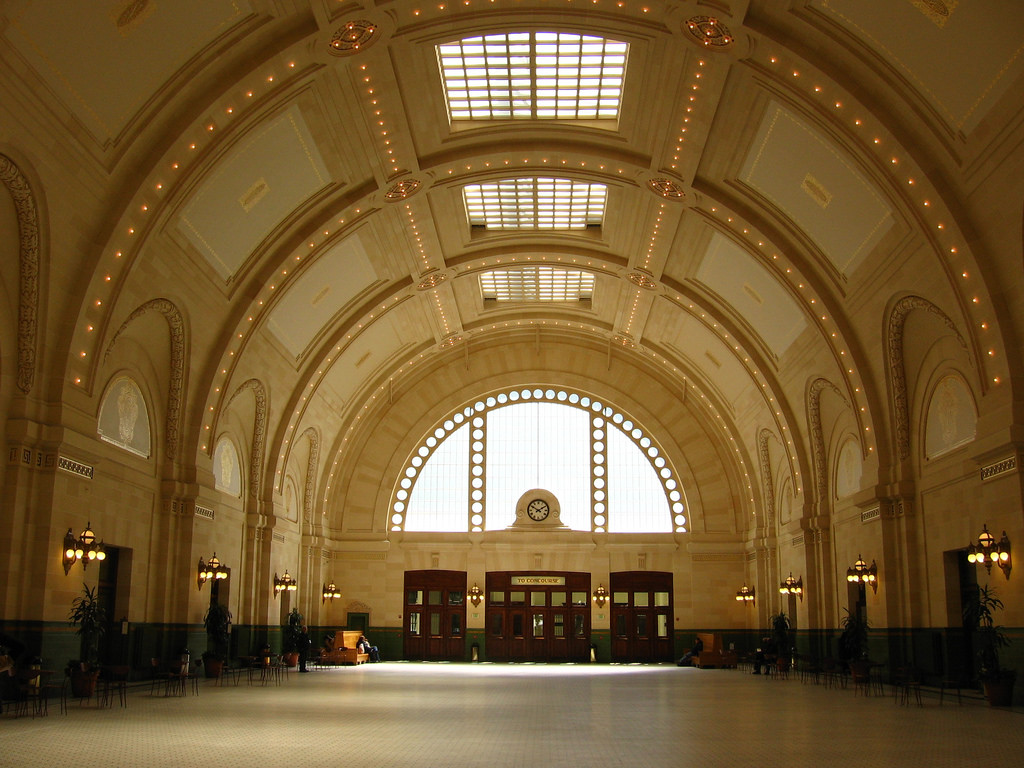 Seattle’s grandest train hall doesn’t lie in the newly-restored King Street Station. That honor goes to Union Station, the 107-year old fallow station just across 4th Avenue. Beautifully restored and now home to Sound Transit headquarters, as a public space it underwhelms; its majestic Great Hall is now just an aesthetic treat for Sound Transit employees, some rainproof warmth for the unsheltered, and home to the occasional special event. Still, it’s not hard to envision its glory days when it was bustling with commuters. And here’s a big idea: let’s make it a transit hub again by building a Link rail station underneath.

Regional voters approved a historic $54 billion ballot measure in 2016 to spread light rail to Everett, Tacoma, West Seattle, Ballard, and more. Part of that measure is a second tunnel for Downtown Seattle, providing essential new capacity and serving traffic-choked job centers like South Lake Union along the way. Three lines will serve downtown Seattle, the Red (Everett to West Seattle) and Blue Lines (Lynnwood to Redmond) in the current tunnel and the Green Line (Ballard to Tacoma) in the new one.

Transfers between all three lines will only happen in only two places: International District/Chinatown Station and Westlake Station. As important as Westlake is, International District/Chinatown is the most important hub of all, providing additional access to Amtrak, Sounder, streetcar, and buses. It’s not an exaggeration to say that it’s the most important transit hub between San Francisco and Vancouver. We have to get it right.

Construction staging will likely obliterate an entire block or two at 5th Avenue from Jackson Street to King Street in the heart of Chinatown for the better part of a decade. What if there were a way to avoid that and make the station better for everyone?

Well, there is. Let’s build the new International District/Chinatown Station west of the current platforms instead of east, right through the heart of Union Station.

Doing so creates basically a single superstation: five Amtrak platforms, two Sounder platforms, two freight tracks, and four Link light rail platforms. It draws all regional transit services closer together in an integrated way. It saves Chinatown from a decade of disruption. It renews Union Station back to its intended use. Denver recently completed a similar consolidation at its Union Station, which will serve over 200,000 passengers daily in one fantastic and well-organized space. There’s no reason we shouldn’t either.

The “garden level” at Seattle’s Union Station–a large tabula rasa currently home to a windowless maze of cubicles–would be home to the new Green Line platforms, above which an existing mezzanine would encircle them with small shops and newsstands. The mezzanine would directly connect to the southbound Red and Blue Line platforms, through what is currently a Sound Transit kitchen and outdoor seating area. Above, the majestic Great Hall would be reactivated with passengers once again, with even more opportunity for commerce inside the station in what is now Sound Transit’s boardroom and reception areas.

The whole area around Union Station consists of a series of historic viaducts built on tidal fill. 4th Avenue is this way, Union Station is this way. Many of the caverns through which the new tunnel would run already exist, currently in use only as underground parking. Construction through these areas would be less disruptive at street level while making for a better station.

There would be a number of additional beneficial downstream effects in SODO, too. Though the Blue Line would head east across I-90 and be out of the picture, the Green Line would need to cross the Red Line somewhere south of International District/Chinatown Station so that the two lines could head to Tacoma and West Seattle, respectively.

There are a number of flaws in the current Sound Transit 3 (ST3) plan in SODO. First and foremost, from 2030 to 2035, West Seattle trains will terminate in SODO forcing transfers to connect to the rest of the system, an awkward situation that will hinder capacity during peak hours. Second, the current plan is for the Green Line to emerge from its deeper tunnel in a trench and slowly come up to at-grade before the current SODO station, removing the current Stadium Station. That’s right, riders from Rainier Valley, SeaTac and Tacoma will lose their access to Stadium Station under the current plan. In its place, a new elevated Stadium Station would be built on the Red Line just west of the current location.

Here’s a better plan: rebuild Union Station first and temporarily terminate West Seattle trains there, somewhere actually useful. From 2030 to 2035, finish the tunnel from Chinatown to Lower Queen Anne, and build the crossovers required for Ballard trains to enter Union Station and West Seattle trains to switch to the current International District/Chinatown Station. As a bonus, doing so gives you permanent non-revenue track connections in all directions, meaning any train can serve any terminus from any operations and maintenance facility, in perpetuity.

Additionally, West Seattle trains could approach downtown from 1st Avenue, where SODO jobs are most concentrated. This could be achieved by using a mix of existing at-grade right-of-way and elevated rail resulting in substantial savings in cost and political capital while providing West Seattle riders a superior connection to most services at Union Station.

The Seattle Times was accidentally onto something when they concern-trolled about Sound Transit’s office expenditures, unhelpfully suggesting they move 800+ employees to Bellevue. Though the agency should be as centrally located as possible, that doesn’t mean that a grand asset such as Union Station should be reserved for a small fraction of them (most Sound Transit employees work in four adjacent buildings). As part of this plan, Sound Transit would have the opportunity to relocate elsewhere downtown. Build their own single tower and consolidate employees? Move to Columbia Center? Up to them, but Union Station should return to its first and best use, a public mobility hub unrivaled anywhere else in the region.

Map of the Week: West Seattle and Ballard Conceptual Alignments