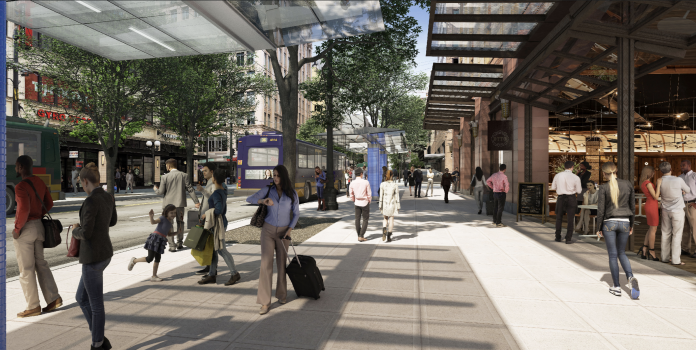 Third Avenue is Seattle’s most prominent surface transit corridor in the city with over 52,000 daily passengers using buses. The Downtown Seattle Association (DSA) thinks that the corridor could benefit from a major remake. Over the past year, the DSA has been engaging in a stakeholder process with association members to receive input on four high-level approaches to remodel how the street functions for transit, private vehicles, and pedestrians alike.

The visioning process came on the heels of the One Center City framework, which will progressively reshape how transportation modes function in Downtown Seattle. That planning and implementation framework, however, has been significantly watered down, in part because of disagreement amongst stakeholders and city officials. One area that was particularly fraught over was a two-way transit corridor for Fifth Avenue. Stakeholders had pointed to Third Avenue as why such a change should be avoided. In response, the DSA wanted to show how a well-designed transit mall could function, which led to the visioning process on Third Avenue.

Third Avenue stacks up as a highly productive transit corridor on a per-block basis when compared to peer cities like Denver, Minneapolis, and Vancouver, British Columbia. However, those peer cities only have two bus lanes instead of four and Seattle utilizes a much higher number of buses at peak hours to move passengers. The peer cities also use differing strategies to move transit, like Denver with a consolidated shuttle bus approach on 16th Street and Vancouver operating a transit-only corridor on Granville Street (except for delivery vehicles, taxis, and people biking).

To develop a new vision for Third Avenue, DSA and their consultants ZGF Architects and Fehr and Peers envision a comprehensive approach that considers overall urban design, function of public space, partnership with private property owners to facilitate lively ground floor spaces, transportation operations, and long-lasting management of the corridor by public and private partners. If a plan is eventually adopted, the DSA thinks that it would be progressively rolled out through 2035, a 17-year timeframe.

The compact transitway concept is premised on Third Avenue having three bus lanes along the corridor. One of the bus lanes would function as a passing lane so that buses can move past stopped buses at rider pick-up and drop-off areas. Bus stops along the corridor themselves would alternate blocks for northbound and southbound buses so that an individual block does not have bus stops on both sides of the street.

The net result of the concept is a wider amount of street area that can be devoted to pedestrian uses. The DSA suggests that sidewalks could range about 23 feet to 25 feet wide per street side. With the added pedestrian space, sidewalks could be activated with retail opportunities (e.g., temporary vendors, newsstands, and adjacent retailers), street furniture, and sidewalk cafés.

One key drawback with the street design concept is that it is predicated on bus volumes being lower compared to today.

The median transitway concept assumes that only two bus lanes, one in each direction, would be necessary on Third Avenue. Buses could stop at median pick-up and drop-off areas while requiring essentially the same amount of right-of-way for transit as the compact transitway concept. An equal amount street space could also be dedicated to the pedestrian environment. The primary benefit of this concept is that the pedestrian realm at the edges of the street would not be impacted by bus stops and waiting passengers.

For passengers, the concept would always require crossing Third Avenue to access the transit island. However, the crossing would be much smaller than the compact transitway approach, easing the ability to get across Third Avenue with shorter wait times, if any at all.

Similar to the compact transitway approach, the street design assumes that bus volumes would be relatively lower compared to today.

Like the compact and median transitway concepts, sidewalk space could range from 23 feet to 25 feet on both sides of the street and be activated in similar fashions. The concept also includes flexible sidewalk spaces closest to the roadway that could include short-term parking spaces (certain sections of Third Avenue already have these flexible spaces).

The transit shuttle and hubs concept would be a radical change for bus operations on Third Avenue. Passengers would be required to connect with mainline bus routes at the ends of Downtown Seattle while one or more consolidated shuttle bus routes operate on Third Avenue. Frequency of shuttles would be very high and offer stops at each block. There is precedent for this model. Denver operates free shuttle buses along the 16th Street Mall between Civic Center Park and the Union Station area, a 1.4-mile corridor.

This concept could afford the most amount sidewalk space, ranging from 29 feet to 30 feet on each side of the street. A portion of the sidewalk space would be dedicated to bus pick-up and drop-off areas with the remainder accommodating a variety of public realm active and passive uses.

Each of the concepts presented various tradeoffs whether they be passenger capacity, transit speed, access and safety, or active street uses. The transit shuttle and hubs concept would return the most amount of street space to pedestrian and public use while wholly remaking the downtown transit system. Scuttling one-seat bus rides may seem a like a bridge too far for some bus riders, but with an inevitable overhaul of bus routes as light rail expands, it may not be too far fetched. Afterall, that model appears to operate well in Denver and maximizes bus utilization on much of the 16th Street Mall corridor whereas individual bus routes would otherwise have unbalanced utilization depending upon direction and time of day. Meanwhile, the compact transitway concept could retain a substantial amount of street capacity for bus throughput and consolidate stop zones. This would provide for a more traditional bus service in downtown while still handing over more space to other uses.

Ultimately, the DSA chose to explore options that would reduce the overall street width for vehicles and capacity for buses while still striving for optimization. This decision was based on the reality that once the East Link, Lynnwood Link, and Federal Way Link extension open in the next few years there will be far fewer buses traversing downtown streets. Instead, the local and regional bus network will be much more focused on bus-to-rail connections and reliance on the Downtown Seattle Transit Tunnel to carry much of the weight.

The DSA is already leading on several improvements to the experience on Third Avenue. Examples include a new activated pilot pavement park on Pine Street at the intersection of Third Avenue, replacement of broken transit screens, removal or repair of damaged or broken newspaper boxes, ongoing cleaning of street litter, and rubber tree-pit filling to improve walkability and aesthetics.

Recent efforts to activate ground floor space of some properties have been fairly successful. Macy’s completed a major tenant improvement this year to house Amazon staff in upper floor space while adding a new ground floor public atrium space with Victrola Coffee Roasters occupying the corner at Third Avenue and Pine Street. Century Square has been working to revamp its Third Avenue ground floor space to active retail uses. Piroshky Pirokshy went in a few months ago as a grab-and-go window bakery and pastry shop. Businesses like these help keep foot traffic moving on Third Avenue and can change perceptions of the street as an active, vibrant, and comfortable space.

Other agencies are also stepping up to help make the Third Avenue corridor better for all. In August, the Seattle Department of Transportation implemented new expanded restrictions on Third Avenue to prioritizes buses for most of the day seven days a week. Further changes will come this March when all-door boarding is deployed for all buses that travel along the corridor.

In February, the DSA will hold their annual State of Downtown event and provide several detailed illustrations of what a redesigned Third Avenue could look like. Shortly after that, the DSA will release a report with more details on how different corridor visions might work, including illustrations, data, and strategies. This information will be highly useful as Seattle embarks on an update to the Transit Master Plan. In the interim, the DSA will continue working with partners to pilot various strategies to improve the corridor for pedestrians, customers, workers, and residents.

Featured image is illustrative of one possible vision for Third Avenue. The was produced by ZGF Architects on behalf of the Downtown Seattle Association.