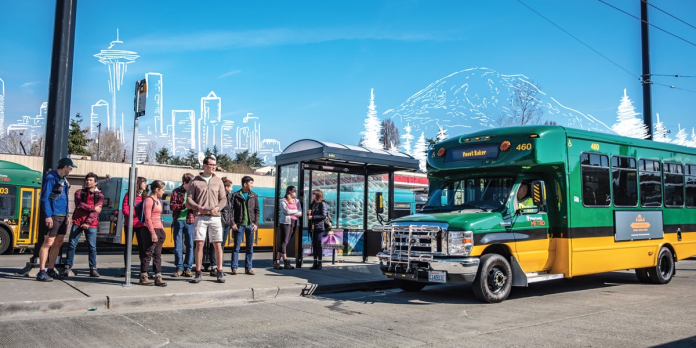 On Thursday, King County Executive Dow Constantine announced the return of Trailhead Direct next month. The bus and van service to local trails is provided by King County Metro, helping connect hikers with the great outdoors while reducing parking demand and carbon emissions. This season will feature four routes connecting Seattle, Tukwila, Renton, Bellevue, and Issaquah to trails in the Issaquah Alps and North Bend.

“We’re bringing back Trailhead Direct with more routes to more trails in more communities,” Executive Dow Constantine said in a statement. “Our popular transit-to-trails service has succeeded in many different ways. We have made our spectacular mountain forests accessible to more people, reduced dangerous overcrowding at popular trailheads, and made it easy to hike without having to drive or park.”

Last year, Trailhead Direct was still in its pilot phase and helped people complete over 10,000 hikes on local trails. Over 60% of surveyed Trailhead Direct riders reported using the service more than once last season and the top reason they cited for using it was because they felt it was “more environmentally friendly than driving.” Not far behind was the response that they did not need to own a car to access trails, suggesting most riders are urban dwellers without a car or who prefer not driving.

Trailhead Direct is a growing partnership between the county, City of Seattle, City of Bellevue, Eastside Fire and Rescue, Washington Trails Association, REI Co-op, and many others. The new season will begin on April 20th and continue through October 27th.

Service is provided on weekends and holidays throughout the season using vehicles ranging from 13 to 27 seats. All vehicles are accessible and have racks for two to three bikes. In terms of fares, Metro charges normal fares with a regular adult ride costing $2.75. Riders can pay using ORCA cards.

Service will run every 30 minutes from the Capitol Hill light rail station from 7:30am to 12:30pm. Metro will operate return trips from the North Bend area beginning at 11:30am at the same frequency until 6:30pm.

There are ample transit connections in Capitol Hill and Downtown Seattle. Riders can also make transfers at the Eastgate and North Bend stops for other Trailhead Direct routes, including the Issaquah Alps at Eastgate and Mailbox Peak at North Bend. The Eastgate stop is served by Routes 221, 226, 245, 271, and 554.

Riders can transfer to other Trailhead Direct routes at Eastgate and the Issaquah Transit Center, including the Mount Si, Cougar Mountain, and Mailbox Peak routes. The Eastgate stop is served by Routes 221, 226, 245, 271, and 554 while the the Issaquah Transit Center is served by Routes 208, 271, and 554. The Mount Baker stop has ample transit connections, including light rail and very frequent bus service to north, central, and south Seattle areas.

The Cougar Mountain Trailhead Direct route will run from the Tukwila International Boulevard light rail station to the Issaquah Transt Center. Along the way, the route will stop a the Renton Transit Center, Renton Highlands, and Cougar Mountain’s Sky Country trailhead. Service will be fairly frequent, departing every 30 minutes from Tukwila International Boulevard light rail station from 7:30am to 1:30pm. Metro will operate return trips from the Cougar Mountain Sky Country trailhead beginning at 10:45am at the same frequency until 7:00pm.