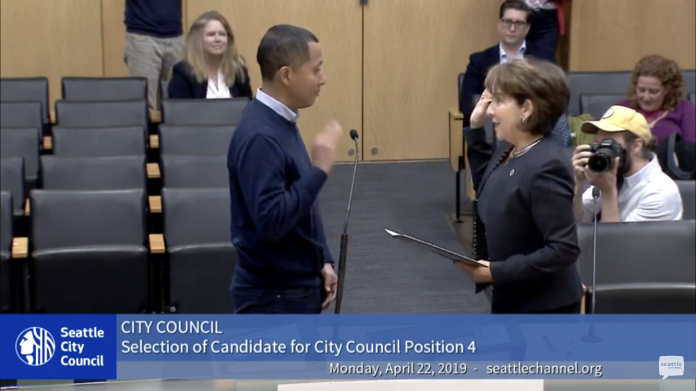 On Monday, the Seattle City Council approved several significant pieces of legislation and welcomed a new temporary member to the body. Council adopted a library levy renewal plans and an action plan for North Delridge community in addition to adjustments to the vacant buildings monitoring program, an interlocal agreement with King County to speed up reimbursement funding under the Conservation Futures program. An implementation and evaluation plan was also approved for the recently reauthorized 2018 Families, Education, Preschool, and Promise Levy.

In August, Seattle voters will get a chance to weigh in on renewal of the Seattle Public Library levy. The six-year property tax levy would initially start at $0.122 per $1,000 of assessed value, which is intended to raise $219 million (about $36 million per year). The levy will help the library system maintain existing services and even increase them. Library hours will be expanded at all libraries with an emphasis on Sundays throughout the system as well as Monday through Thursday evenings, except for the Central Library. The levy would also help fund other key programs and aspects of operations:

The Office of Planning and Community Development has worked to create an action plan to improve the North Delridge community. The action plan looked at wide ranging issues and identified new policies that should be added to the city comprehensive plan for future implementation. Generally speaking, these issues focused on parks and recreation, arts and culture, and mobility. The action plan, however, does acknowledge that future station area planning will be needed in the future.

Comprehensive plan amendments include some of the following:

Priority actions included in the plan include the following:

The action plan is the culmination of a four-year planning process that kicked off in mid-2014 and involved dozens of partners and community organizations. Many ideas that were captured through that process have been identified for subareas within the action plan:

Under the comprehensive plan, implementation of the goals and policies should unfold over the next 20 years with some aspects coming to fruition much sooner like greenways, crossings, and RapidRide H Line.

Several updates were made the city’s vacant buildings monitoring program, following a report on performance last fall. The program was last modified in September. The changes made by the city council on Monday are fairly narrow:

The city council authorized a new Conservation Futures interlocal agreement with King County. The Conservation Futures program includes a countywide property tax that raises funding to protect a variety of valuable lands like farms, open space, forests, and other recreational areas. Revenue has been used to provide matching funds for property acquisition under various city parks and recreation programs. According to Seattle Parks and Recreation, the city has received about $63 million in grants from the Conservation Futures program, which has help with the acquisition of approximately 150 properties and 130 acres of land.

The city council selected a new member from the public to fill the position recently held by retired Councilmember Rob Johnson. Abel Pacheco, a resident in District 4, and former (and current) candidate for city council was picked to the finish out Johnson’s term after a round of voting. Five of the eight city councilmembers chose Pacheco, including Councilmembers Sally Bagshaw, Lisa Herbold, Teresa Mosqueda, Debora Juarez, and Bruce Harrell. David Goldberg and Brooke Brod each received one vote in the final tally.

At age 31, Pacheco will be the youngest member to the serve on the city council. He currently works as the Director of Strategic Engagement for Washington Mathematics, Engineering, Science Achievement, which is a STEM pathway program within the University of Washington for young women and students of color. In his run for city council, he lists housing affordability, multimodal transportation, increasing access to opportunity, and homelessness assistance as top priorities of his. Pacheco does not own a car, he said, because he wants to reduce his carbon footprint and prefers getting around without one. (You can read our previous interview from 2015 with him for past priorities and issues.)

Councilmember Pacheco will immediately begin his assignments on the city council and be responsible for chairing the Planning, Land Use, and Zoning Committee. While the Mandatory Housing Affordability program has come to its end, there are still major land use bills that are poised to come through the committee this year. He will hold the seat until the November General Election results for the seat’s replacement are certified.