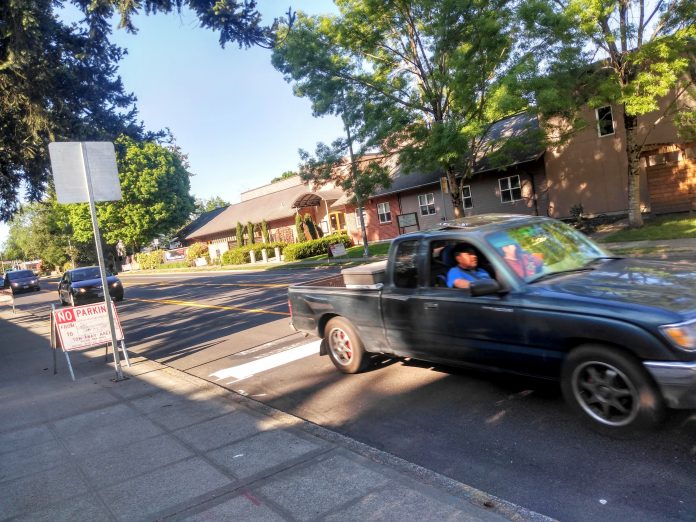 Last month, in response to videos documenting dangerous motorist behavior on the newly redesigned 35th Ave NE in Wedgwood, the three members of the Seattle City Council’s Sustainability and Transportation Committee sent the new transportation department director, Sam Zimbabwe, a letter expressing concern and asking how the department would be reacting to what was happening on the ground.

The letter’s response was delivered last Tuesday, just one day after a fourth councilmember, Sally Bagshaw, publicly raised concerns about the safety of the street at a council briefing attended by most members. Director Zimbabwe, scheduled to meet with the transportation committee on the Bicycle Master Plan that same day, evaded attempts to directly outline the response in-person, but did address some of its points in his presentation. 35th Ave NE was officially deleted from the Bicycle Master Plan when Mayor Jenny Durkan decided to implement an alternate striping plan that removed bike lanes in favor of a center turn lane. That turn lane is now being used to pass bikes, buses, and other vehicles–often at speeds higher than the posted limit.

The councilmembers on the transportation committee wanted to know how the Seattle Department of Transportation (SDOT) is viewing the new design through the lens of Vision Zero–the City’s goal of eliminating traffic deaths and serious injuries by 2030–and what revisions, if any, the department intends to make to fix shortcomings. Heidi Groover of the The Seattle Times obtained a copy of the response to council questions. The letter doubles down on insisting that the implemented design is perfectly fine. Director Zimbabwe defends the street design by saying that 35th Ave NE “meets the project objective and furthers Vision Zero goals.” Let’s break down some of the details that are mentioned in the letter.

Speed is the critical factor in the severity of collisions, contributing to 25 percent of traffic fatalities citywide…

We collected speed data on 35th ave NE in early June as we had previously committed to doing after project completion.

The speed data detailed by the director shows that vehicle speeds on 35th Ave NE are virtually unchanged compared to speed studies that were completed before the project started. At NE 50th St, 85% of vehicles in both 2016 and this month were traveling 35.4 mph or below. The speed limit there is 30 mph. At NE 77th St, in the heart of the business district, that 85th percentile speed was down a tiny amount from 32.2 to 31.8 mph.

SDOT plans to revise the posted speed limit in the heart of the corridor between 65th St and 89th St to 25mph. But because speeds are influenced by design as well as speed limit signs, it should actually be worrisome that a extensive design change to the street did not significantly change actual vehicle speeds.

The first traffic fatality on the street since the redesign happened in early June, following a serious injury between a driver and a bicycle rider last month.

A recent crash at 35th AVE NE and NE 75th St between a motorcycle driver and the driver of a pickup truck on the evening of June 10 resulted in the death of the motorcycle rider and is currently under investigation by SPD.

The crash should not be viewed as indicating that the project is not meeting goals or furthering vision zero.

OK, the argument that the street design is so new that we should wait until there is more information on collisions seems reasonable. I think the question that the councilmembers were getting at was do the collisions indicate something about the roadway design that would recommend further changes.

SDOT will consider the crash and any relevant data in considering any potential future modifications. Preliminarily, it appears that a left-turning driver turned into an oncoming motorcyclist. At this time, we are not aware of information suggesting that the roadway might have caused or contributed to the crash.

What? The information that the roadway contributed to the crash is outlined in the same paragraph. The street redesign did not include protected turn signals that would prevent a driver from making a turn into an oncoming vehicle they did not see. The city’s own commissioned study on safety practices for pedestrians and bike users suggests this type of maneuver is responsible for a disproportionate share of serious injuries.

It’s one thing to say it’s too early to tell what impact street design is having on collective injuries and fatalities on 35th. It’s another thing to seemingly separate, as this letter appears to do, the city’s goal of zero fatalities and injuries from any individual incident.

Reading this it’s impossible not to be reminded that Sam Zimbabwe’s boss, Mayor Jenny Durkan, has never publicly recommitted the city to Vision Zero since taking office in November 2017. Seattle continues to stagnate rather than make process toward this traffic safety goal, which makes the ‘everything is good here’ tone of SDOT’s response truly baffling.

The letter also asked about the Complete Streets Checklist. The Director’s response attaches the original 2016 checklist, completed when the project still included bike lanes in the design. “After the decision to implement the current design, the checklist was not repeated as none of the modal plans had changed.” What?! Removing any bike facilities from the project did not require a reassessment with the complete streets checklist? He continues: “The new design remains consistent with the policies of the Bicycle Master Plan, which provide guidance for the project delivery process”. In other words, the fact that the project design does not in any way reflect the Bicycle Master Plan designation for 35th doesn’t mean it’s not consistent with it. Apparently.

In addition to the planned speed limit reduction, SDOT plans to install posts (the kind that might be installed on a protected bike lane project) between left turn pockets and the center turn lane to reduce illegal passing. It evaluated intersections to add marked crosswalks and found that not enough people were crossing the 30+ mph street to warrant any additional ones. However, Director Zimbabwe says that the “design is an improvement over the pre-project roadway cross section.” An improvement for whom is pretty clear: drivers wanting a road where going fast is encouraged and crossing pedestrians are few.

The director’s letter to council is fairly bold in its obfuscation around both Vision Zero and the Complete Streets ordinance. Whether or not the City Council will take any action to improve the implementation of either remains to be seen.