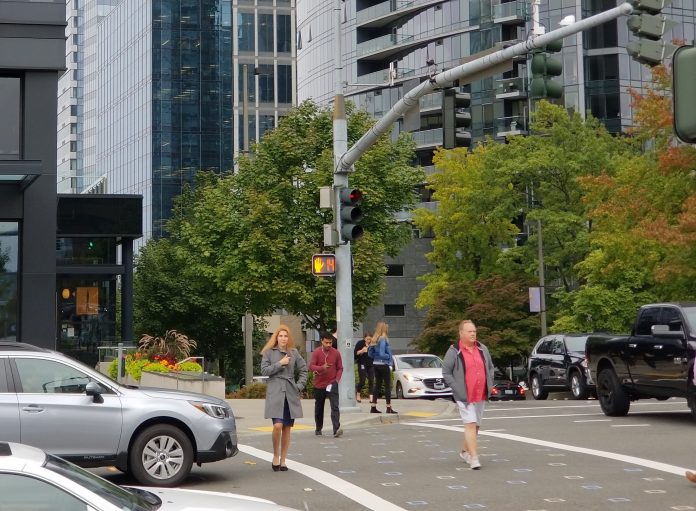 On Tuesday, KOMO TV reporter Steve McCarron tweeted about Bellevue police stopping pedestrians who tried to enter the crosswalk on the blinking red hand phase. This is a phase when pedestrians are still allowed and expected to be in the crosswalk, but just not enter it. While Bellevue is the second city in the state of Washington to declare a Vision Zero goal of eliminating traffic deaths by 2030, it has had a recent uptick of serious injuries and deaths on the road. Focusing enforcement on the most vulnerable and least responsible group appeared as borderline victim-blaming. It wasn’t until King County Councilmember Claudia Balducci (District 6-Bellevue) stepped in (thanks!) that we learned this was only educational outreach.

Still, the incident highlighted a key urban issue in Downtown Bellevue—traffic lights are timed such that they give pedestrians the least priority among any road user and either encourage crossing during the blinking red phase or discourage walking altogether.

I timed the light cycles during the evening rush hour (5:30pm – 6:00pm) at three intersections. The findings are more shocking than I expected. Bellevue uses adaptive signals (well loved in Seattle, too), so the timing varies slightly from cycle to cycle and the numbers below are slightly rounded.

There are several key problems with Bellevue’s traffic light timing.

Firstly, there are only five seconds for pedestrians to enter intersection while vehicles get 30 to 50 seconds! Lights universally provide only five to seven seconds of a white walk signal followed by a 16-second countdown timer. The countdown timer is essentially a yellow for pedestrians–they should not be entering the intersection during this phase, only clearing it according to current state law. Even the full pedestrian crossing cycle (21 seconds) is much shorter than what vehicles get (30 to 50 seconds). The high chance of missing the crossing stresses people out or slows them down when they do miss it. This only serves to discourage them from walking.

Secondly, there is up to 2.5 minutes between two pedestrian crossing cycles while for cars it is 1.5 minutes to just under 2 minutes. This is another major problem. If a person misses the five-second window to enter the intersection, they have to wait 2 minutes to 2.5 minutes for the next five-second window. It takes about two minutes to walk from intersection to intersection, so if one were to miss every light, this can double trip time. Imagine a 10-minute walk becoming a 20-minute walk due to traffic lights. Bellevue has invented a way to create the effect of congestion for pedestrians! What does this do? It discourages walking!

Bellevue’s downtown has extremely high density with 53,000 workers and 14,000 residents in approximately one square mile. About half of the parcels of land contain one- and two-story buildings or surface lots and are redevelopable. Zoned building height peaks at 600 feet (approximately 40 commercial or 60 residential floors). The density is expected to double from what it is today. It’s physically impossible for all of these people to get around town by car, regardless of signal optimization.

But there are several other reasons why pedestrian wait times at lights are important to address:

So how do we work ourselves out of this hostile environment for pedestrians? Here are some suggestions:

Bellevue already has a vibrant pedestrian life despite these major hindrances to walkability. Fixing them can only improve the livability and business potential of the city. I leave you with this cheerful pedestrian scene right at the end of Snowflake Lane. There is so much more joy and happiness that can fill the streets of Bellevue if only we would allow it. 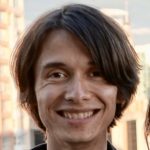