Seattle has plenty of hills and waterways which makes a subway system attractive in comparison to road-based solutions. But even a subway needs to worry about steep hills and water unless you’re willing to spend a ton of money building deep stations and maintaining escalators and elevators. This issue helped kill the First Hill Link station in 2005. Instead of deep stations or building huge ramps or bridges, it might make more sense for Seattle to focus on building a fast and efficient subway spine and use urban gondola technology to scale our hills branching out from that spine.

Gondola lines would run continuously using electric power and less labor than a subway, bus or streetcar while also not competing with existing roadways. There are other cities with similar geography which have already proven this technology. In particular in already densely populated neighborhoods, gondola lines are far easier to build and require less housing displacements than elevated lines. Gondola stations require a smaller footprint and therefore disruption than underground subway stations, and the stations can even get integrated into other buildings. Recent projects even integrate the gondola station into both rail and bus stops.

After Portland’s gondola success, Vancouver, British Columbia is planning to spend $150 million (USD) to do the same. Various manufacturers point out that this is proven technology and available for less than a streetcar and at about one tenth of the cost of a subway.

Most of these projects provide transportation between 2,500 and 4,000 people per hour in each direction. This is not as much as light rail provides, but usually plenty for the last mile connections.

Let’s explore some such opportunities.

West Seattle might be the most obvious opportunity: Sound Transit 3 (ST3) includes plans for an Avalon and a Junction station. Residents have complained about the huge ramp going up towards Avalon Way since the inception of the line. They pointed out the considerable housing displacement and soon suggested a subway alternative with somewhat reduced displacement, but with an additional cost of $700 million. Either way the line would probably dead-end at the Junction for the foreseeable future as California Ave SW is too tight to run an elevated line and a subway line may be too costly for the expected number of boardings. Earlier articles already pointed out that it would be a bad investment.

Instead of dead-ending Link at the Junction, Link could run along Delridge further South (White Center, Burien, airport, and connect with South Link there). For less than the original ST3 budget, a gondola could be built to go up the hill from the Delridge station, to Avalon Way and the Junction. The support towers would require far less housing displacement and would be easier to build than high ramps and/or tunnel. Later we could even run another gondola up along Admiral Way. Once we extend Link further towards White Center, we could add additional gondolas going up to High Point or even to the Fauntleroy ferry terminal.

Avoiding a deep subway tunnel, a gondola could run from the Pioneer Square Station up Cherry Street to serve the First Hill hospitals and Seattle University and/or run from the Library along Madison and provide a much faster connection to downtown than the streetcar.

There has been discussion to run Link along the Eastrail corridor but it wouldn’t have connected downtown Kirkland and therefore got deprioritized in favor of running “Stride” bus rapid transit along I-405. The current plan calls for an elaborate station on NE 85th St, but does not provide a quick connection to the Kirkland transit center downtown. A gondola might be the perfect connection.

Once Link runs to Isaaquah, a gondola might be an attractive way to connect downtown Issaquah with the Highlands.

As shown in London, gondolas can also span water or great distances for far less than building a bridge. A gondola may connect the Overlake Link station along NE 24th St with Sahalee and therefore the Sammamish Plateau. Rather than reintroducing ferry services, it might make more sense to connect Sandpoint Way with Kirkland.

There have been discussions to run an east-west Link line from Ballard to Children’s Hospital in Laurelhurst. Unfortunately there are many hills along the line making it challenging to build gondola stations at various heights. For example, it would be difficult to connect with Link at Brooklyn Ave NE and then drop down to U Village thereafter. Route 44 carries 9,300 daily weekday riders even though it’s mired in traffic, the ridership potential of rapid transit in the corridor is high.

A gondola might be able to provide more stations than a subway at a far reduced cost while at the same time not getting stuck in traffic. It could connect with U Village and Children’s Hospital or continue along Sandpoint Way and cross Lake Washington at Magnuson Park towards Juanita Point or even downtown Kirkland to connect with I-405 RapidRide. This would provide far higher speed and transportation capacity than reintroducing ferries.

The featured image of a gondola in Jounieh, Lebanon is credited to FunkMonk via Wikimedia Commons. 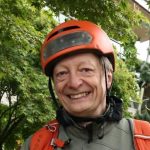 Martin grew up in Germany and now lives in Seattle. He is passionate about how public transportation infrastructure can reduce traffic congestion, climate impact, and housing cost while broaden access to transportation. During the day, he works for a tech company in the Pacific Northwest.