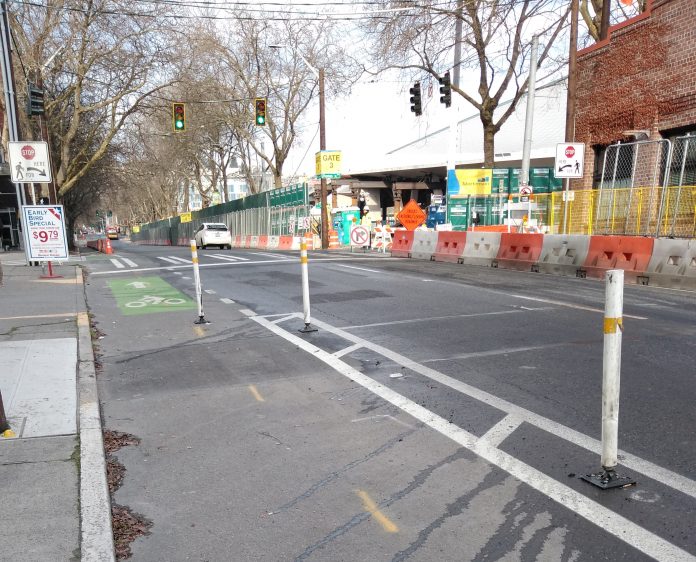 The bike infrastructure around the Seattle Center Arena is on track to get an upgrade by the time visitors start arriving at the new arena–currently in the middle of being renovated into a larger sports and event venue–in 2021. As a requirement of the remodel, the arena’s developer is contributing to a transportation revamp for the arena’s front door. But the current plans fall short of providing people biking in Uptown a full connection to surrounding neighborhoods, according to plans obtained from the Seattle Department of Transportation (SDOT).

Queen Anne Avenue N and 1st Avenue N north of Denny Way operate as a couplet for vehicle traffic, with Queen Anne Ave carrying the southbound traffic and 1st Ave N carrying northbound. Currently the only bike infrastructure on Queen Anne Ave is a faded paint bike lane next to curbside parking. On 1st Avenue N a paint bike lane also ran along side Key Arena, prior to the start of construction on the arena itself. In order to protect bike riders from dozens of construction vehicles per hour, last year the 1st Avenue bike lane was upgraded to a protected lane for the duration of construction: that lane runs today from Denny all the way to Roy Street to the delight of Uptown bike riders.

However, once construction is complete and the arena opens, people wishing to bike from one end of the neighborhood to the other will have to make a jog at Thomas Street, with a two-way cycletrack planned north of Thomas on Queen Anne Ave N and south of Thomas on 1st Avenue N. The connection on Thomas will mostly include physical protection from the traffic lane, but a short segment will not.

Bike riders are being moved off 1st Avenue N to make way for what SDOT is calling a “flex lane”–a curbside parking lane that can be put into service as a travel lane if necessary. With a planned bus-only lane on 1st Ave N terminating at Republican Street (with a transit queue jump) that preserves three general purpose travel lanes north of Republican for traffic after events to get onto Mercer Street and out of the area.

1st Avenue N is currently a successful demonstration of how well a protected bike lane works on that street, and the dedicated bus lane will maintain transit capacity after events. Moving the bike lane off 1st Avenue N to add back car capacity doesn’t make sense. People of all ages and abilities can ride safely and feel comfortable in protected bike lanes. This opens up biking to a lot more people and convinces people to bike more often. But a protected bike lane need to connect to other safe biking facilities to create a highly useful network. If there’s a gap, some people will simply choose not to bike, and unfortunately SDOT is planning to create some gaps.

A document obtained from SDOT via public records request shows how the need for travel lanes guided the location of the bike facility, with red arrows on the map designating the number of general purpose travel lanes:

Connection to the North

Roy Street currently features bike lanes stretching almost all the way from 5th Avenue to Queen Anne Avenue–the only east-west dedicated bike lane north of Denny Way. These bike lanes could use an upgrade (as a recently rejected Neighborhood Street Fund proposal would have done) but they are better than nothing. However, the bike lane planned for Queen Anne Avenue N would end a block short of Roy, not extending north of Mercer Street except in the form of a stub bike lane directing people on bikes around the line of parked cars into the traffic lane.

Getting into the two-way bike lane to head south will also be a challenge. People on bikes in mixed-traffic coming south on Queen Anne will need to get all the way over to the left to enter the protected bike lane, navigating buses entering the bus lane and drivers getting out of the bus lane.

Reached for comment about the one-block gap, SDOT’s Ethan Bergerson told The Urbanist: “We do not yet have funding identified for this connection. Going forward, we will continue to work to identify potential funding sources to complete a two-way protected bike lane on Queen Anne Ave N between Roy St and Mercer St.”

But the funding for bike lanes through the end of the Move Seattle levy has already been allocated to other projects, and the need to fund a one-block gap was not known at the time those projects were decided. The city council has already worked hard to find additional funds to build connections in Southeast Seattle.

Connection to the South

What about connections to the south of Uptown from these new bike lanes? The 2nd Avenue protected bike lane’s northern segment is getting deleted to accommodate more car traffic from arena garages, with bike riders directed to the sidewalk and no plans for a bicycle connection on 2nd Avenue N, so cross that off the list.

The bicycle master plan has funded a route that would utilize Broad Street and 1st Avenue to connect the planned lane on 1st Ave N to 2nd Avenue south of Broad St. But we don’t know what that looks like yet. In December, the bike advisory board was told that design for that segment was still in very early stages with essentially no information to share about how that route would connect. It is not known if the facility would be a two-way cycletrack or one-way bike lanes on either side of the street. What is known is that as planned the route would be another zigzag for people coming and going from Uptown in addition to the one happening at Thomas Street.

The bicycle master plan’s implementation plan through 2024, updated this past spring after much community process, showed facilities on both Queen Anne Ave and 1st Ave N all the way from Denny Way to Roy Street. When the update was released, Deputy Mayor Shefali Ranganathan told the bike board what the direction from the Mayor’s office was on the bike master plan: connecting hubs given the constrained resources and completing existing networks.

The planned facility here fails that test on both counts, by dead ending at Mercer Street, a street not designed for anyone to bike on. The planned zigzags in the route to accommodate car traffic water down the project even more. It is not what the community was promised earlier this year, by a long shot.

The arena’s goals for bike mode share to events is set at a shameful 2%, and the concessions made here clearly illustrate why. The short-sighted decisions here to accommodate vehicles will likely end up pleasing no one, and squandering an opportunity for a people-focused multi-purpose arena built for all Seattle residents, not just those in cars.