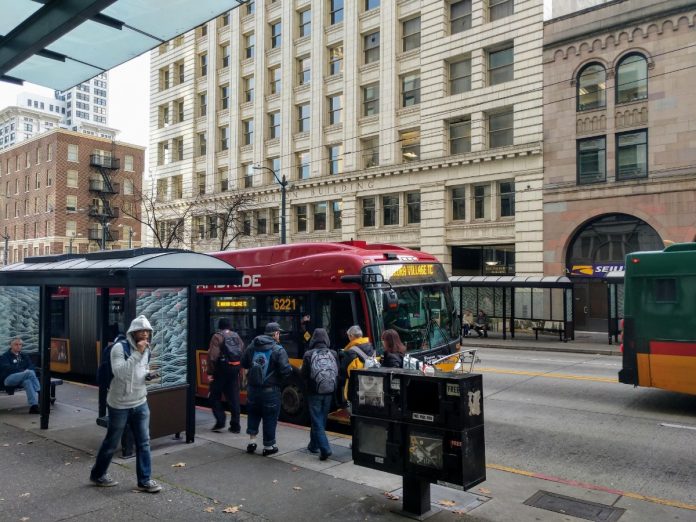 The King County Council unveiled some transit investment concepts for a countywide ballot measure at its full council meeting yesterday. The measure could jumpstart King County Metro’s efforts to electrify its fleet or it could focus on expanding conventional transit service. Either way, at $160 million per year, it would be a significant new revenue source for transit.

Lawmakers face a May 8th deadline to add ballot measures to the primary ballot. Time is ticking for the King County Council to settle on a package given their preference to put it on the August primary ballot to avoid appearing alongside a $1.7 billion bond measure to upgrade Harborview Medial Center in November.

Seattle Mayor Jenny Durkan urged the County to get a move on and informed them the City of Seattle would begin moving ahead with its own ballot measure on March 18th if the County wasn’t making progress. The Mayor hasn’t released details of what a Seattle-only package would look like, but the existing (and soon-to-expire) Seattle Transportation Benefit District has been credited with Seattle’s strong transit ridership growth and for extending frequent transit to 70% of the city’s population. Seattle has purchased 10% of Metro’s total service hours via the benefit district, boosting frequency.

The County seems to have settled on a 0.2% sales tax hike to fund the measure. Even backers of the transit measure are not thrilled to be relying on the sale tax, although some see it as the only viable option before them.

“It goes without saying the sales tax is kind of a shitty funding source,” County Councilmember Dave Upthegrove said at the meeting.

Backers are hoping that funding an expansion of low-income fare program ORCA Lift takes some of the regressive sting out of the sales tax measure and that expansion of regional transit service outweighs the downside.

Moreover, there is concern that a city by city approach would cause transit service to deteriorate in poorer areas. TCC Policy Director Kelsey Mesher made the case in a Seattle Transit Blog op-ed titled “Now is the time to regionalize transit funding.”

“Metro’s long range plan, Metro Connects, outlines how we can achieve outcomes like these throughout King County, which is why Transportation Choices Coalition strongly supports taking a countywide approach to funding transit,” Mesher wrote. “The alternative is continuing with a ‘pay-to-play’ system where the most well-resourced cities, like Seattle (or potentially Bellevue or Redmond, should they choose to run their own measures), receive a higher level of service, creating a two-tiered transit system.”

All of the concepts presented have Seattle’s portion of the measure locked in with $50 million to maintain current service levels, $5 million for affordability programs, and $5 million for “innovation,” which refers to projects like Via to Transit that attempt to solve transit’s first mile/last mile problem. This would seem to suggest Mayor Durkan is planning to continue the Via to Transit pilot program. The rest of the county has $12 million locked in for affordability programs across the options.

Package A spends the most on “Innovation” at $20 million per year for three to five active projects. $11 million for electrification of Metro’s fleet which would be enough to convert South Annex to an electric bus base. Package A spends a baseline of $3 million on transit speed and reliability upgrades, which is enough for one or two projects.

Package B spends 0 on electrification, but spends an extra $9.5 million per year on regional service hours over the other two options. It also spends $5 million annually on parking and triples investment on transit speed and reliability improvements to $9 million, allowing five to eight projects.

Package C spends the most on electrification at $22 million, which is enough to convert a second bus base (North Base) to electric. Package C would not invest in “innovative” last-mile service outside of Seattle. Like B, it spends $5 million on parking. The $6 million it spends on transit speed and reliability improvements is enough for two to five projects.

Invest in Transit Speed and Reliability

Each package concept has its advantages. For an urbansit or simply from a value added standpoint, investing in parking is a very low priority. Transit speed and reliability improvements are a high priority since they not only improve the rider experience and also ensure that fewer transit service hours are wasted in traffic congestion. This also allows Metro to get more service with the same amount of hours–padding the schedules of traffic-clogged routes doesn’t do much good.

The other big question is if August is the right timing for the ballot measure. Massive turnout is expected in the General Election, but Primary turnout will be lower and may not be as decidedly progressive. If lawmakers are certain two large ballot measures shouldn’t run on the same ballot, perhaps the Harborview bond measure should be the one getting bumped off the choice November real estate.

Bonding for the county hospital should be popular and likely to pass in many circumstances. It could be that the county transit measure needs this presidential election boost. Transit advocates are leery of the failed countywide measure in 2014, and hoping not to repeat that history.

That said, TCC is confident of the countywide measure’s success this time around.

“Through TCC’s outreach we know that a countywide transit measure will have the support not only of transportation advocates, but of affordability advocates, labor partners, businesses big and small, climate activists, and the general public–who understand that improving transit in our region benefits everyone,” Mesher said.