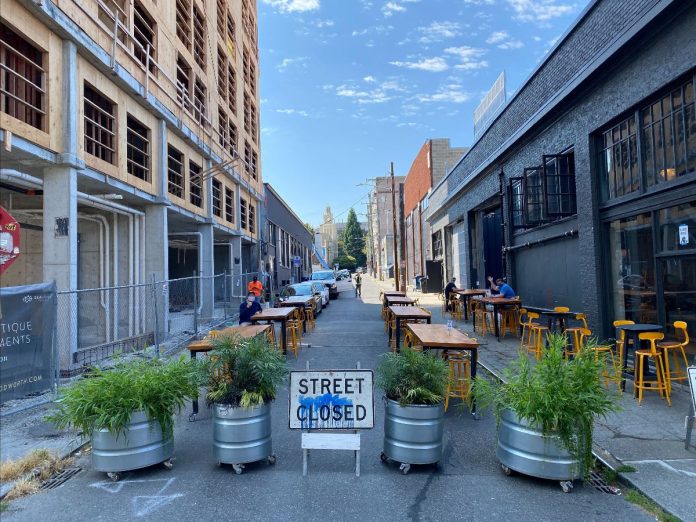 Following several months of discussion, the City of Seattle has received the first applications for opening street space to dining. Since the Seattle Department of Transportation (SDOT) began taking applications on July 29th, 18 locations around the city have expressed interest in fully or partially opening nearby roads to social distance dining. Instead of just occupying parking spaces and sidewalks, restaurants will be able to move into space once reserved for cars. This weekend, the first opens at Optimism Brewing in Capitol Hill.

Optimism Brewing’s Expanded Beer Garden is first to take advantage of the City’s program due to past experience with outdoor seating and recognizing the limitations on their location. Optimism had filed temporary street closure permits with the City for past events. As the pandemic shutdowns began in March and business dropped off, co-owner Gay Gilmore tapped into that experience. She contacted the city to ask “if there’s something we can do for a longer period of time. The city hadn’t at that point even considered this.”

The brewery sits at the corner of Broadway and Union Street in Capitol Hill, two major arterials with small sidewalks. The City was not going to close those streets, so Optimism turned to a third road, Broadway Court, that runs for a block behind the building. “If you could think through this problem,” Gilmore asked SDOT staff, “not every restaurant is in a place we here they can take over the sidewalk.”

However, the brewery sat dark for three months while the city passed through Phase One of lockdown and the Capitol Hill neighborhood became the site of Black Lives Matter protests. As the police violence calmed and the neighborhood activity returned, Optimism worked to restart. “Because we had the previous conversation,” Gilmore says, “we were at the front of the line. We had a thought out plan since we had done it before.”

Gilmore’s experience with the City’s coaching was very positive. “The City was easy to work with. They are always concerned about safety.” She points to some of the questions the department asked. How is it handled if a person isn’t paying attention and makes a turn? Where can you put street closure signs in the most visible location? How is the sidewalk accessible for the visually impaired? “They were on the phone coaching us.”

The brewery had a test run for outdoor seating and worked through adjustments with SDOT. Now they’re ready for customers. “We are approved for the rest of the summer. The expanded Beer Garden means so much for our business,” Gilmore says. Reservations are recommended as they seat tables this weekend.

This back and forth coaching is in line with new guidance from Public Health — Seattle & King County. Titled the Healthy Business Streets Guide, the health department has a solutions toolkit stocked with sidewalk extensions, curbside dining, and plaza and market streets.

Under the bold heading of “Act Now” the health department asks municipalities to prioritize public space to aid physical distancing as soon as possible. “Cities should not shy away from adjusting their streets to prioritize pedestrians during Phase 2 and 3 of the State Safe Start. While in years past street closures have enabled large gatherings for street fairs, farmers markets, ‘Bicycle Sundays,’ ‘Play Streets,’ and block parties, these same street closures can now help provide the space necessary for physical distancing and outdoor dining.”

The health department lists four principles guiding its recommendations. These include centering the interests and perspectives of those most impacted negatively by Covid, enable people to adhere to public health guidance through environmental design, and supporting local business recovery.

The fourth principle (and longest explanation) states: “Protect now and iterate over time to build lasting recovery.” The health department explains, “An adaptive and iterative approach to implementation will help cities settle on sidewalk and street layouts that work best for the needs of local businesses in the context of each business district.” To get there, they recommend quick build, temporary installations that can serve as pilot projects. Deciding what works requires a collaborative approach that “allows community values and priorities to inform the characteristics of healthy business streets.”

While it took a while for the City’s open streets program to get off the ground, the potential for iteration and continuation is a very good development. “The coaching process has been very positive and well-received as we’re able to help people understand the options available to them so they can choose an approach that best meets their needs,” SDOT’s Brian Hardison said. Optimism’s experience bares that out.

Parking and access appear to be the primary concerns of neighbors surrounding those applying. This is particularly acute in certain neighborhoods. “In the Chinatown-International District, we’ve heard from business owners a reluctance to close streets since it would potentially impact access for delivery/takeout drivers,” Hardison said.

Another inhibition on opening streets is the streets themselves. As with Optimism’s application, two of the streets are difficult to completely close. Hardison said, “From a traffic management perspective, proposals on non-arterials are easier and faster owing to the lesser impact of closing a non-arterial street.” Road construction, which has not been delayed everywhere, also can alter street permits. SDOT is coaching applicants to reach out to neighbors and reduce conflicts. In some cases, applicants are taking the route of applying for outdoor seating in parking spaces and sidewalks. Parking space and sidewalk takeovers had their fees waived by earlier city action.

But as the health department points out, some communities are harder hit by the negative effects of Covid than others. SDOT recognizes that many inquiries are happening in areas like Capitol Hill.

“So far, we’ve not received any inquiries regarding temporary street closures from businesses or organizations in the Central District,” Hardison said. “We have conducted targeted outreach in the area, and have plans for further engagement. We want to make sure that we’re responding to the concerns of residents and business owners and not reinforcing inequities.”

It will remain to be seen how many businesses take advantage of these permits for the remaining two months of summer. While late in coming, it is hopeful that opening streets will save some restaurants, bars, and breweries. In the longer term, SDOT’s allowance for iteration that focuses on everyone’s safety and not just automobile speed is a benefit to the city in the future.