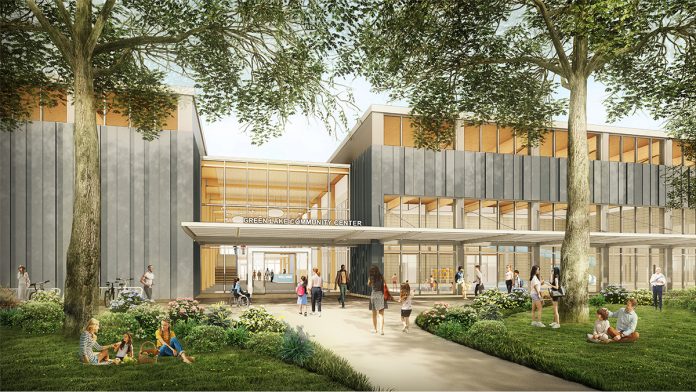 On Monday, Seattle Parks and Recreation (Parks, for short) released a preliminary site plan for the new Green Lake Community Center as part of the third open house for the redevelopment project. The Urbanist covered the past two open houses, when they were narrowing down site selection and site configuration of the community center. Parks apparently has settled on building the new and larger community center on the site of the current building, basketball courts, and some of the parking lot.

The preliminarily site plan incorporates feedback from the past open houses, attempting to highlight elements that were most popular with commenters. Notably, the entry alignment with the existing avenue of sycamore trees, close proximity of the play area and community center to the lake, and moving parking away from the lake were popular and incorporated into the latest site plan.

So far, these landscape design choices will improve the community center’s connection to the water, trail, and neighborhood commercial core. It also gives visitors more access to the water with the parking lot shifted closer to East Green Lake Dr N and away from the water. Green space within the park is lost, as the new community center will be bigger and other non-green spaces retain their square footage. In addition, the footprint of the parking lot is still significant and is evermore prominent in the latest design, which may present another point of concern.

Within the next year, Green Lake will receive significant bike and pedestrian improvements and a neighboring light rail station in Roosevelt. These major improvements to the transportation apparatus of the neighborhood should be reflected in the park’s transportation amenities. A bicycle parking garage and any sort of pedestrian amenities would be a welcome substitute for a portion of the grey sea of parking proposed. The redevelopment should be giving space for people rather than space for cars.

There are other relevant concerns that Parks should address, including community center disruption, potential soil instability, and monoculture tree vulnerabilities. By using the old footprint of the current building plus additional areas around it, Parks will render Green Lake without a community center and public pool for a projected three-year construction period (2024 through 2026), meriting some form of programmatic mitigation. The old building also rests on the old lake bed and some loose fill, so the new center may be inheriting unstable soil conditions. Additional soil analysis should be conducted to determine risks to construction. Lastly, preserving the current sycamore tree monoculture that flanks the avenue could leave the trees vulnerable to disease and die off, and potential death from old age. Further evaluation of their ecological health should be completed as part of the design and redevelopment process.

In terms of actual building design, the preliminary plans pull from the “lakeside porch” theme (Option 2) and “terraces” theme (Option 1) presented in the August open house. If implemented, the blended design could wind up giving visitors excellent views and access to the lake. The second floor will have the terraces that look out to the lake, and the west side of the building will have multiple exits that spill out onto the porch, trail, and lake. The east side of the building incorporates an intuitive alignment of the entrance with the avenue.

Entering the building from the east, visitors are met with a welcome hall that gives visitors the opinions to navigate to the center’s amenities, find a space to sit and relax, or proceed through the community center and to the beach. The new community center will host two pools, a gym, child care, event space, and a variety of other services for patrons and the surrounding community. Access to the terraces, the pools’ spectator balcony, and additional activity and event space can be found upstairs in the presented design.

This time around, Parks is seeking the most detailed feedback on amenities and activity programming for the community center. Less extensive than past open houses, the open house is still collecting general feedback on site and building design. If you;d like to weigh in, be sure to participate in the open house, which runs until December 4th.