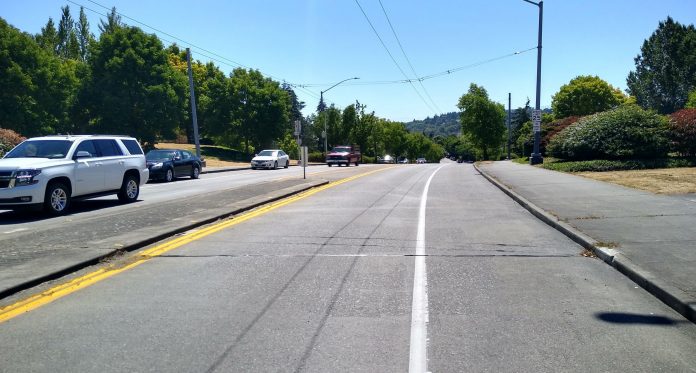 Like a planned safe bike route running the length of Beacon Hill that we wrote about earlier this week, the Seattle Department of Transportation (SDOT) is designing a protected bike lane connecting the future light rail station at Judkins Park to Mount Baker Station. This project is also planned for construction in 2023 and SDOT wants to hear your feedback about it this week with a survey that closes at the end of the day Friday.

Unlike on Beacon Hill, we have a pretty full picture right now of what the entire project will look like, and it’s mostly as good as can be hoped for. One-way protected bike lanes will be installed on either side of Martin Luther King Jr Way S from Judkins Street south completely through the daunting intersection of MLK and Rainier Avenue. The Mountains-to-Sound Trail connection at I-90 will be a final connection to Sound Transit’s Judkins Park light rail station at 23rd Ave.

Renderings for all of the major intersections on the route are below. Almost all of the green mixing zones where the bike lane loses protection from the travel lane are driveways.

The bus stops here are probably where the project could be most improved. All of the stops shown in the renderings, like the one below at Massachusetts St, show buses entering the bike lane to stop. The southbound stop in particular, on the right, definitely shows room to instead install a floating island for passengers to wait at, with the bus stopping in-lane. Of course, that might delay people in cars for a very short period of time.

SDOT also says it plans to extend the MLK protected bike lane all the way to Rainier Beach, but that segment of the project, which didn’t have funding for construction, was put on hold by the Durkan administration as part of 2020 Covid-related project freezing.

What is also moving forward with the protected bike lane are the improvements that make up the so-called Accessible Mount Baker project. This project, one of a few key pedestrian and streetscape improvements that were used to sell the Move Seattle levy to the public, has been in the works for many years now and it’s frankly unacceptable that it will take until 2023 for these relatively straightforward set of changes to be made. These are separate from the long-term vision for Accessible Mount Baker, which includes a serious rethinking of how the two massive streets that are Rainier Avenue and MLK Way in Mount Baker can be better utilized.

These “near-term” improvements include:

SDOT has already disappointingly ruled out another potential improvement, converting one side of the Olmsted-designed Mount Baker Boulevard near Rainier Avenue into a pedestrian and bike street.

One of the saddest facts is that two people have already lost their lives while walking or rolling through the intersection of Rainier and MLK Way in 2020 alone–these improvements should have been made long ago and more intensive improvements would likely have been needed after that.

The bike connection and the associated improvements can’t come quickly enough. Don’t forget to take the survey by Friday.