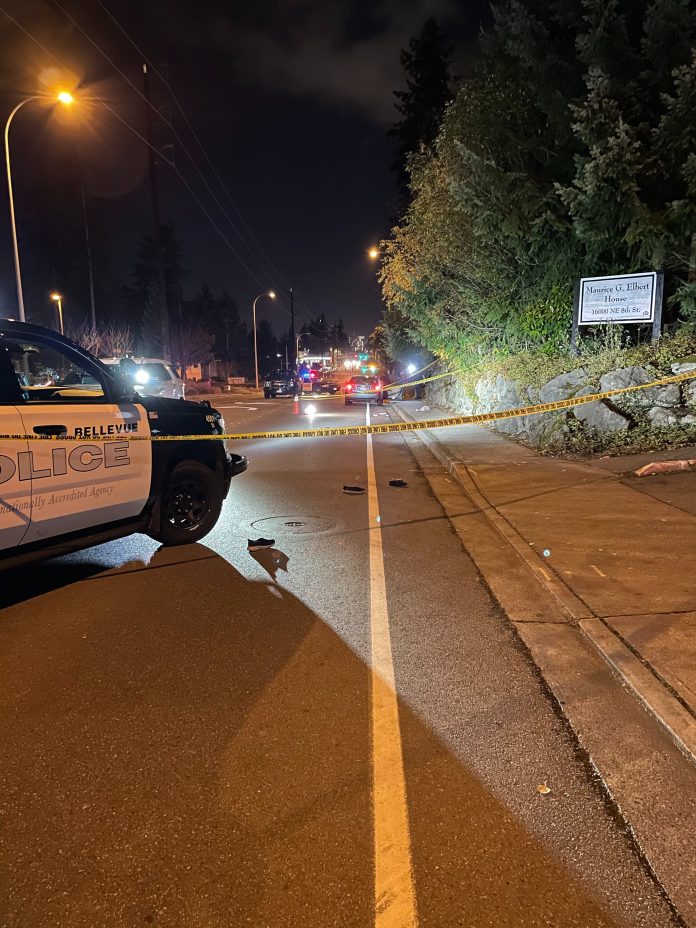 At 5:20pm Monday, Bellevue Police received a call about a pedestrian-driver collision near Crossroads Park. A 92-year-old gentleman was walking along NE 8th St and only a block away from his home when a driver struck him in the roadway, killing him.

This tragedy marks the fourth death on city streets in 2020 and the ninth in the last 15 months. Eight victims have been pedestrians or cyclists who were struck by drivers, and seven of those have been people over 60 years of age. 2019 saw the most deaths plus serious injuries on Bellevue streets in more than a decade, and 2020 isn’t faring much better.

Much is left to be investigated about how this collision occurred, but that hasn’t stopped the internet comment wars about who is ultimately at fault for this incident. That police were quick to note the cooperative and unimpaired nature of the driver as they listened to his side of the story will invariably lead people to blame the pedestrian for his own death–I believe it’s unfortunate that we will not be able to grant the same privilege of attentive listening to the victim. However, I would argue that this isolated search for fault (which is frustratingly so fundamental to our legal system and our perception of guilt) pits residents against one another and misses a larger picture. The statistics I just cited show that this collision is not an isolated incident. In fact, this is the third fatality on NE 8th St in the last 15 months alone.

The framework of Vision Zero (a pledge adopted in many cities, including Bellevue, to reduce collision fatalities and serious injuries to zero by 2030) rightly emphasizes a systemic approach to road safety. Proposals that focus on individual responsibility, such as public awareness campaigns and enforcement, can only go so far, because people will make mistakes. The key to achieving our Vision Zero goals will lie in adaptations to our transportation infrastructure that make it impossible for such injuries and fatalities to occur–even when people make mistakes. Although this may sound like a monumental task, the application of quick, tactical road modifications to improve transit, bicycle, and pedestrian mobility while introducing road conditions that encourage lower vehicle speeds has been accomplished worldwide with significant success.

And even though our history of suburban land use patterns currently makes mobility outside of a car in many areas difficult, that does not make us unique, special, or immune from applying these known solutions — especially in our mixed-use areas with frequent pedestrian and cyclist traffic. Bellevue, ever the data-oriented city, already knows which streets are in the most urgent need of safety modifications. Through study and analysis, city staff know that 56% of Bellevue’s fatality and serious injury crashes occur on just 7% of the city’s street network.

And guess which road comes out on top as having the most collisions?

With this context in mind (and until we have more information regarding the exact circumstances of Monday’s collision), let’s examine what we can: the dangerous conditions on NE 8th that can so often lead to tragedy.

And let’s start at the scene of Monday’s collision, pictured above. The first thing I notice while traversing the sidewalks on this section of NE 8th St is how narrow they are. At only 6 feet wide and immediately adjacent to the road, there is no protection offered from the traffic that often greatly exceeds the posted 30 mph speed limit, especially as cars head downhill going westbound. The five-foot painted bike lanes are suitable for only the most confident of riders, certainly not for families or for people who are just learning to cycle. Perhaps worst of all for people walking and rolling on this key commercial and residential corridor is the sheer lack of marked crosswalks connecting establishments on either side of the street. The gentleman in Monday’s collision, for example, was several hundred feet from the nearest crosswalk to the east. Alternatively, he would have needed to head over 1000 feet to the west to access a signalized intersection, one that likely would have prioritized the mobility of cars over his own and left him waiting.

For mobility-impaired individuals, this need to double back and wait for signals that do not prioritize pedestrian movement can add several minutes to a journey and represent a prohibitive barrier from undertaking a trip in the first place. At a bare minimum, the addition of crosswalks in front of key destinations, such as the retirement center and the restaurants on 160th Ave NE, would provide more frequent opportunities for residents to access the places they need to get to. When combined with lower speeds, this portion of the corridor could be made markedly safer for everybody who’s just trying to get where they need to go.

If you live, work, or study in Bellevue, sign Complete Streets Bellevue’s letter to City Council.

Just a few hundred feet to the west, however, NE 8th St becomes the five-lane behemoth that Bellevue loves to use to move cars.

This road configuration, actively hostile to pedestrian and cyclist mobility while expressly designed to move as many cars as quickly as possible, is the core danger behind NE 8th St. Any attempt to make this street safer must acknowledge that the design of this street and the driving conditions it enables are fundamentally incompatible with the mission of Vision Zero. They leave no room for cyclists to safely avoid collisions with vehicles, killing them. They enable drivers to strike pedestrians who are legally in crosswalks at high speeds, killing them. As a city, we cannot merely choose to paint a bike lane, add a planted buffer next to a sidewalk, and call it a day. We must address the fundamental issues with our city’s land use, street widths, vehicle speeds, and urban design choices that have made swathes of Bellevue inhospitable and actively dangerous for those walking, rolling, and biking.

Although certainly not a panacea for these multiple deep-rooted problems, there is room for hope in the city’s current budget deliberations. A Vision Zero Capital Investment Program (CIP) Project has been introduced that would fund rapid-build, tactical fixes to improve safety on several of Bellevue’s most dangerous roads, including NE 8th St.

The city’s original draft budget would see this funding begin in 2023, but thanks to an amendment proposed by Councilmember Janice Zahn, Bellevue residents could see this money make a difference as soon as next year. Monday’s collision, and the series of deaths we’ve had over the last 10 years, remind us that these road design changes are long overdue and too late for too many. But if Bellevue City Council shows leadership and approves Councilmember Zahn’s amendment, they can meaningfully support Vision Zero action at the second best time: now.

To learn more or join the fight, check out Complete Streets Bellevue. If you live, work, or study in the city, sign the organization’s letter to City Council.

Chris is a UW Environmental Sciences graduate who moved to Bellevue in 2015. When he's not busy being an urbanist fox on the internet, he's working on the Eastside to support efforts reducing greenhouse gas emissions and going to city council meetings to denounce the hegemony of automobile infrastructure. Follow him on Twitter at @Deutski1.