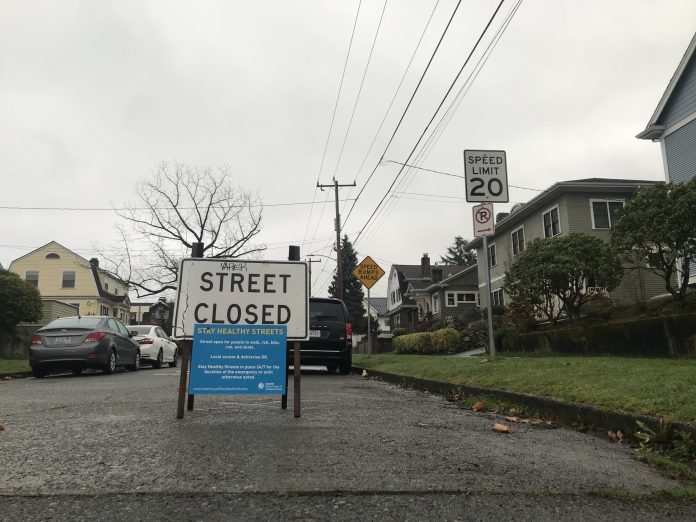 On Monday, the Seattle Department of Transportation (SDOT) announced that Stay Healthy Streets–streets that are highly restricted to car traffic to provide space for walking, biking, rolling, and playing–were getting a sign and post update. New signs will be posted on barrels and barricades for better visibility and security. Since the original A-frame signs have been rolled out, many have suffered from weathering, physical damage, and occasional malfeasance by motorists and passersby. That has left Stay Healthy Streets unsigned and subject to heavier, faster vehicular traffic.

Complaints of damaged and moved Stay Healthy Streets signs have been ramping up in recent weeks.

Last week, Ryan Packer, Senior Editor at The Urbanist currently filling-in at Seattle Bike Blog, reported a torn apart sign. “I usually err on the side of assuming street closure signs are getting damaged inadvertently but sometimes the evidence just speaks for itself,” Packer tweeted. Packer’s photograph showed part of the sign still intact on the A-frame but several torn pieces strewn about on the ground nearby. The signage was also heavily graffitied.

In mid-November after a windy night, Leah Missik reported that many signs had fallen down or moved from the street. “I went on a short run on some #StayHealthyStreets this morning,” she tweeted. “I fixed SEVENTEEN signs that had been knocked over or moved off the road–and that’s not counting signs that were completely gone.”

Local journalist Erica C. Barnett also expressed dismay with signage on Saturday. “People keep moving the ‘street closed’ Stay Healthy Streets signs in my neighborhood onto the sidewalk or the curb so they can zoom through back streets, and I keep moving them back,” she tweeted. “[W]e need more permanent/secure barriers to keep people safe!”

Barnett’s tweet apparently got the attention of SDOT to which the department replied that new signage was on the way. It seems though that SDOT was already in the process of designing new signage to better serve Stay Healthy Streets in lieu of more permanent solutions like concrete diverters and barriers with posted notices at intersections. At least one street has already benefited from the new signage. In Ballard, SDOT has installed a barricade on the 17th Ave NW Neighborhood Greenway.

The new signs should be able to withstand the elements and better deter would-be malefactors from moving signs since barrels will be partially bolted to the ground and barricades will be held down with sandbags. The barrels and barricades should also be much more durable than the wooden and aluminum A-frame signs that SDOT has been using. However, the new signs might not stop acts that deface or damage Stay Healthy Streets signs. Perhaps the most important change to the signs is a more prominent emphasis of “STREET CLOSED” signs. On the A-frame signs, these were a bit cluttered and not as readily apparent to people driving.

SDOT is seeking to make permanent its first 20 miles of Stay Healthy Streets, as Mayor Jenny Durkan pledged, but has not locked down funding yet. The department recently brought a proposal before the Move Seattle Levy Oversight Committee to shift some funds from existing projects to the permanent Stay Healthy Streets program, but it got some pushback, as Packer reported, since the suggested cuts, like Thomas Street Redefined and the Central Ridge Greenway, would be painful and had not been vetted with the City’s bicycle and pedestrian advisory boards.

So far, Stay Healthy Streets cover 26 miles of Neighborhood Greenways, which is the bulk of the Seattle’s 45-mile Neighborhood Greenways network. SDOT has also built upon the Stay Healthy Streets program with a Stay Healthy Blocks program where community members can request free permits to open local streets on a temporary basis for walking, biking, rolling, and playing activities. Permits allow local streets to be opened for Stay Healthy Blocks use from 9:00am to 9:00pm and up to 20 hour per week. Feedback on both programs can be provided to SDOT via email.

With new signs posted on barrels and barricades heading to the streets, there is hope that signs will stick around and that the Stay Healthy Streets program will become more reliable during the winter months ahead.