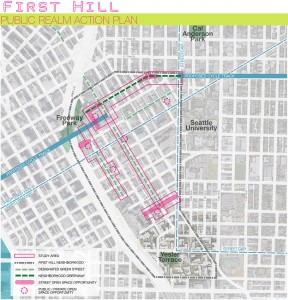 The City of Seattle will be holding an open house to discuss the First Hill Public Realm Action Plan on January 7th, 2015 at Town Hall from 5-7pm. Details are available here. First Hill is one of the densest urban neighborhoods in the City of Seattle, home to some of the city’s largest employers. The number of jobs and people are increasing, and yet the neighborhood remains critically deficient of public open space. The First Hill Improvement Association (FHIA)–representing a consortium of residents, visitors, businesses, and major institutions–has long-advocated the need for more public spaces in the neighborhood to remain a vibrant and livable neighborhood.

As one of the few neighborhoods zoned for high-rise residential buildings, available land comes at a tremendous premium, making open space acquisition prohibitively expensive, and in short supply. The Seattle Department of Planning and Development (DPD), Seattle Department of Transportation (SDOT), and Seattle Department Parks and Recreation (DPR), are proposing a variety of approaches beyond acquiring private land to provide the necessary open space. By utilizing the existing street right-of-way, vast improvements in neighborhood connectivity and open park space can be created at a much lower cost.

Thus, the Public Realm Action Plan was created, which includes “the development of near term implementation strategies to expand the public space network through right of way reallocation, private development partnership and strategic site selection for potential acquisition.” SDOT and FHIA identified key streets and intersections in the First Hill neighborhood and have developed new street concept plans for adoption into the city’s Right of Way Improvement Manual.

Street concept plans are guides for street and sidewalk improvements that can be made over time as new development takes place. Four concepts are currently being studied. DPR is planning a prototype park to be located at the intersection of Union St, University St, and Boylston Ave in order to test concepts and gauge the neighborhood reaction/opinion. A Street Scrabble tournament was held at this location, to much success, this past summer. SDOT would develop this plan with allocated funds in conjunction with DPD and DPR, as soon as this spring.

Ninth Ave and University St at the top of Freeway Park’s Piggott Corridor will see pedestrian safety improvements and the creation of new public seating and landscaping. SDOT would develop this plan with allocated funds in conjunction with DPD and DPR, as soon as this spring.

Eighth Ave between Seneca St and James St designs are likely to be implemented by private development. Projects in motion at Eighth Ave and Madison St and Eighth Ave and Columbia St could choose to implement these streetscape designs, and are likely to do so given because it is both the community’s stated preference and the City’s adopted designs. The design for Eighth Ave includes pedestrian safety improvements at intersections and crosswalks, activation zones, and roadway adjustments. FHIA identified Terry Avenue as a critical street to include in the Public Realm Action Plan, and funded the design. Focal points near the Sorrento and Virginia Mason, as well as St. James Cathedral. O’Dea, and the Frye Art Museum have been suggested as a woonerf, a shared space featuring curbless streets, enhanced landscaping and encourage use by pedestrians, cyclists in addition to vehicular traffic.

A woonerf is a living street implemented in the Netherlands and in Flanders. Techniques include shared space, level streets, traffic calming, and low speed limits.

The Terry Avenue design stretches from Spring St to Alder St, meeting up with future plans for greenways and parks as part of the Yesler Terrace redevelopment underway.

Unlike Bell St., the Terry Avenue plan would be implemented over time as various projects are developed on the street. Funding would come from various sources including, but not limited to, property developers and landowners located along the right-of-way. The Terry Avenue plan is also being designed to integrate with the Madison BRT project’s pedestrian improvement and open space goals.

The City of Seattle will be holding an open house discussing the First Hill Public Realm Action Plan on January 7th, 2015 at Town Hall from 5-7pm. Details are available here.

Full Disclosure: I am a member of the First Hill Improvement Association and sit on the Transportation and Open Spaces Committees