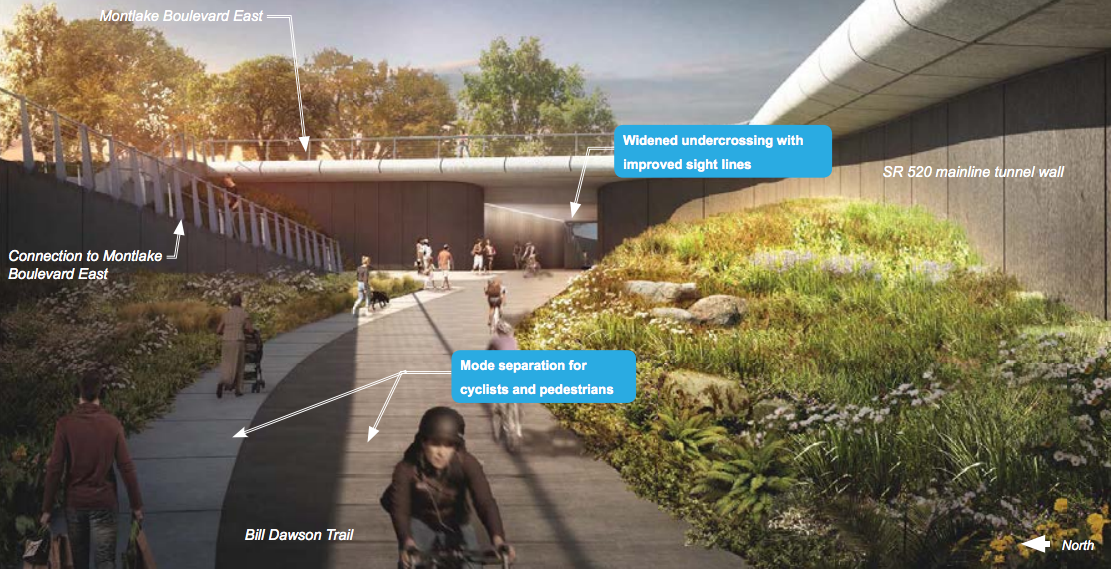 Seattle is faced with a mega-project that will completely overhaul the declining SR-520 segment from I-5 to Montlake. As proposed by the Washington State Department of Transportation (WSDOT), the project comes with more lanes on SR-520, a potential second bascule bridge across the Montlake Cut, a more complicated Montlake Interchange, and a wider Montlake Boulevard. But, it also offers partial land bridges and lids, facilities for walking and biking, and direct access for transit.

Many across the Seattle community have made very impassioned pleas to the Seattle City Council to consider a more complete resolution for the SR-520 rebuild. This comes in large part because they feel the project plans fall short of the needs for Seattleites on foot, bike, and transit. Passage of such a resolution by the Seattle City Council will be the City’s endorsement of project implementation and so understandably getting this right is deeply important. That’s why last week Gordon Padelford, a member of the Pedestrian Advisory Board and Seattle Neighborhood Greenways, penned a call to action here on The Urbanist saying that:

While there is a lot to like in the draft resolution, … the current SR520 Draft Resolution does not include the top three needed fixes outlined in a letter sent to the City seven months ago by a coalition of community and healthy transportation groups:
1. Single lane on-ramps and raised crosswalks at the Montlake interchange so that people can safely walk across.
2. Protected bike lanes on Montlake Blvd to allow people to safely bike through the interchange.
3. A neighborhood greenway along the Lake Washington Loop paid for by WSDOT, to provide a key link in the non-motorized system, and protect the neighborhood’s quality of life by mitigating cut-through traffic.

To the credit of WSDOT, the agency has made some concerted efforts to improve the project design for those walking and biking. Examples of this are the removal of free right turns from on- and off-ramps, new sidewalks will be much wider throughout the project area, better connections for northbound and cross-lake bus connections, and a network of trails that could act as super-bike-highways between the Eastside and neighborhoods of Seattle north, south, and west of the Montlake Interchange.

Here are a few of the top things the resolution already expresses support and direction for:

Earlier this week, the Transportation Committee of the Seattle City Council met to discuss the SR-520 resolution in detail — one week after a major public hearing on the topic in the University District. The Committee considered a series of sevens amendments proposed by Committee Chair Tom Rasmussen and Councilmember Mike O’Brien that addressed some of these concerns specifically. Six of these passed at the committee with one of O’Brien’s put on hold pending further feedback.

Rasmussen offered the first amendment, which would amend a section focused on elements of the project still in flux with the WSDOT design team. Much of the project details are still up for refinement, including precise intersection designs and crossings, landscaping, and Bill Dawson Trail. As the final design elements continue to evolve, Rasmussen wants WSDOT to continue to involve the Seattle Design Commission and community.

O’Brien offered the second amendment, which would require WSDOT to create a protected bike lane from the University of Washington Station to E Roanoke St just south of the Montlake Interchange, in accordance with the City’s Complete Streets policies. O’Brien’s amendment suggests that this could be provided partially via the potential bicycle and pedestrian bridge across the Montlake Cut, and reaffirmed that during the meeting. He also said that even if the bicycle and pedestrian bridge is placed further eastward from Montlake Boulevard, a protected bike lane would still make sense along that portion of the corridor since people will want to get across directly.

Andrew Glass-Hastings, Transit and Transportation Advisor, stepped up to speak on behalf of the Mayor’s Office. He felt that the language proposed was “premature and overly prescriptive” at this time given that it could impact modes and affect design without having yet been adequately analyzed. O’Brien responded by saying:

I think if we really want to ensure, live up to our Vision Zero no fatalities or serious injuries, the reality is that there will be folk that are biking on Montlake that are going to take the most direct path, and if that path is a new ped bridge adjacent to it. As I said, they’re going to be riding in traffic on Montlake on bike. And so, I think it’s important that if that’s the path that we choose, then there’s some way we protect that.

Rasmussen acknowledged O’Brien’s case for the protected bike lane, but suggested a “friendly amendment” that would revise O’Brien’s language to say “seek to” or “consider” instead of outright require. O’Brien declined the compromise language from Rasmussen. Council President Tim Burgess then raised the question of how the protected bike lane might interact or conflict with dedicated bus lanes on the street. O’Brien reiterated that people are still going to end up biking across the bridge regardless of other modes. Rasmussen suggested that amendment be placed on hold until the Council hearing on the resolution next Monday and also asked that O’Brien speak to the Bicycle Advisory Board on the issue for consensus prior to the hearing.

O’Brien’s next amendment proposal was much more successful. He suggested that a protected bike lane should be placed on E Delmar Dr and E Roanoke St to connect the I-5 overpass trail to the multi-use path on the Portage Bay Bridge. As seen above, the current arrangement partially achieves the goal of having continuous dedicated bicycle facilities, but doesn’t fully get there.

Following up that amendment, O’Brien proposed another that would greatly enhance pedestrian safety throughout the program area in two ways. Firstly, it would require that freeway ramp openings, in addition to crossings, consist of special surface treatments or raised crosswalks to enhance wayfinding and safety. And secondly, it would require WSDOT narrow freeway ramp openings and reduce turning radii. This comes in addition to language already calling for reduce lane widths and the elimination of free vehicle turning movements at crossings.

O’Brien’s final amendment would bolster the City’s statement on project implementation. As it stands, the resolution calls for final construction to be completed in full with limited impacts to local communities. But O’Brien’s amendment would go further by calling upon WSDOT to develop a comprehensive plan to account for transportation and safe access of all modes during construction, including transit, bicycles, and pedestrians. WSDOT has consistently neglected this issue with inexcusable bus closures and onerous walking detours at Montlake Boulevard thus far.

Rasmussen then picked up the last two amendments for the meeting. His first would add language noting Seattle’s expectation that WSDOT convey the wetland and landmass area south of SR-520 (known as the “WSDOT Peninsula”) to the City for park purposes. This land, which consists of a former interchange, is in the process of decommissioning and could serve as a great environmental and open space asset to the Department of Parks and Recreation inventory. Rasmussen’s last amendment would convey last week’s public testimony on the resolution and project to WSDOT and urge the agency to consider the comments in the final project design.

On Monday, the full Council will meet at their regular session to discuss the resolution with possible vote.