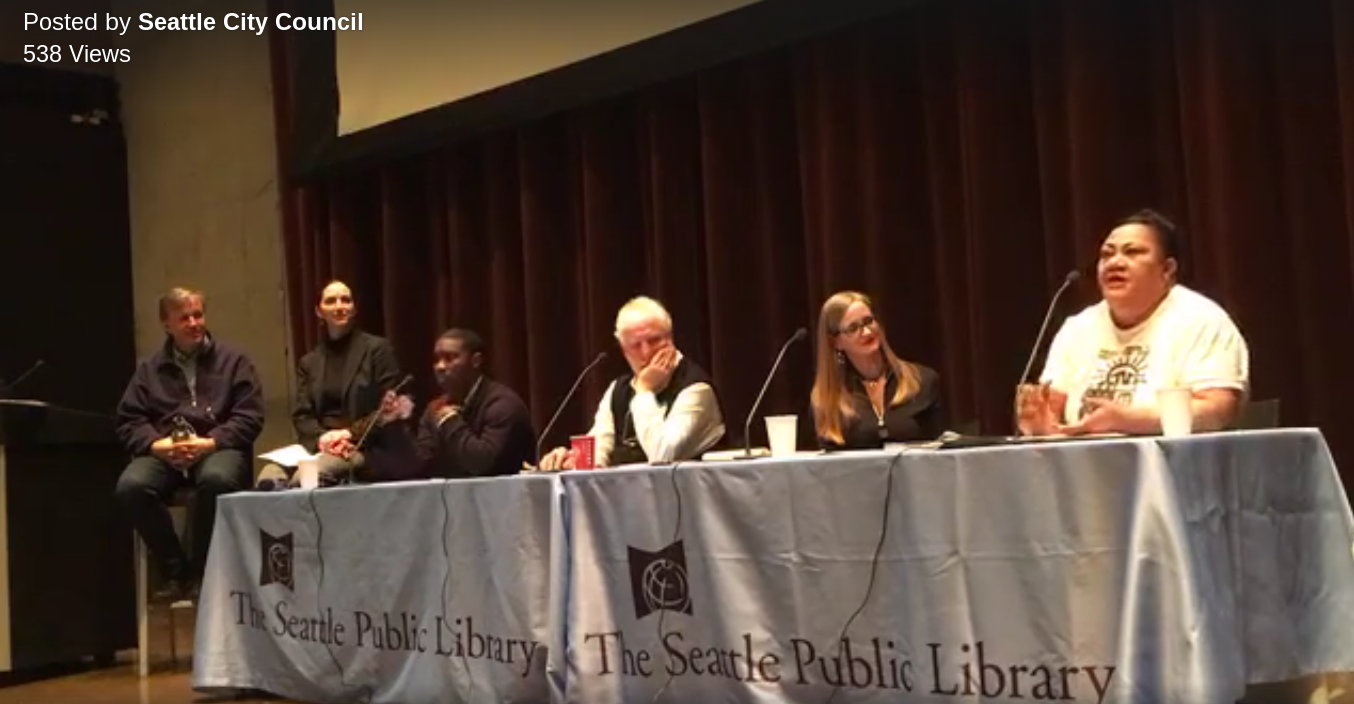 Right before snow coated the Emerald City’s streets on Thursday, more than a hundred housing advocates gathered at the Central Library to hear a panel titled “Building Affordability Through Community Ownership”.

Councilmember Mike O’Brien and Puget Sound Sage Director Rebecca Saldaña (who was just appointed 37th Legislative District State Senator last night) moderated the event with four panelists each bringing a unique perspective. The event wrapped up a day of workshops focused on distilling lessons from successful national models of community ownership. The video is available below via the Seattle City Council recording and via this higher quality Seattle Channel video. (Also, check out my tweetstorm here.)

To kick off the panel, Sandra McNeill shared her experience leading T.R.U.S.T. South LA, a non-profit focused on using a community land trust model to make new housing in and around Downtown LA more inclusive and affordable. McNeill said the scope of the problem is enormous in Los Angeles with more than 40,000 people living on the streets. Putting land into a community land trust helped shelter some Los Angelenos from the displacement driving them out of their close-in neighborhoods as they gentrified and rents spiked.

Meanwhile, Urban Homesteading Assistance Board (UHAB) Director Andy Reicher focused on the limited equity housing co-op model which he’s been promoting and growing in New York City for almost forty years. Reicher said initially divestment and abandonment plagued cities like New York back in the 1970’s and 1980’s and UHAB focused on rehabbing building in various states of disrepair and converting them to co-ops. As the City of New York abandoned some of its public housing stock, co-ops proved a major stopgap for low-income households. Reicher said co-ops often stabilized neighborhoods, providing an anchor for revitalization as the dial flipped from divestment to gentrification. Co-ops were able to stay relatively affordable even as housing prices skyrocketed in the private market in a booming Big Apple. One of Reicher’s key pieces of advice was to organize; elected officials listen when tenants are organized, he said.

Perfect segue to Violet Lavatai, Membership Coordinator with the Tenants Union of WA, who spoke about what the union’s effort helping tenants organize to take ownership of their buildings. The successful model that the Tenants Union is seeking to emulate is A Place To Live community run by the Benton East Support Organization in Kent, Washington. A Place To Live is a cooperative community of 32 affordable duplexes that was launched in 2002 with public and private funding. Lavatai stressed repeatedly the importance of tenants seizing their power and seeking a community ownership model to exercise it. Look no further than Renton for a cautionary tale for tenants: investment companies buy up relatively affordable properties, puts corporate property management companies in charge, and seek to deny the vouchers of its low income tenants. Now tenants are organizing and pushing back.

Also sharing his experience organizing in Seattle, Wyking Garrett discussed Africatown-Central District Preservation & Development Association’s efforts to empower and honor the culture of Black Seattlites by harnessing development projects in the Central District. The Africatown vision looks like it will come to life in the Liberty Bank Building site that Capitol Hill Housing is developing with special attention to the bank’s history of serving the Central District’s African American community. Garrett was perhaps the most incisive speaker of the night: “Seattle has three companies trying to figure out how to solve the problem of building condos on Mars, so we think there’s brainpower here to keep our communities in place and grow and thrive.” Garrett added people talk a lot about equity and shared prosperity but that it was time to “make the rhetoric real.” A municipal bank would be one option to get more affordable housing projects off the ground, Garrett suggested. And Garrett’s blunt suggestion: tax the rich to fund affordable housing played very well in the room.

All in all, the event seemed to energize the advocates gathered to strive for greater power for tenants and low income households in a market that isn’t very forgiving for them otherwise. Community ownership models, like the community land trust and housing co-ops emphasized, provide a path to do that while at the same time building more housing to close the shortage felt strongest by those with the least means. That said, the models discussed didn’t seem to just be about building more housing–though that’s certainly crucial–but also about shifting paradigms so that tenants are seen and see themselves as community assets, agents for their own change, and a political force when they rise up in numbers. As a few speakers reminded everyone: Seattle is more than 50 percent tenants.

Seattle’s Homestead Community Land Trust handed out pamphlets for an “Deep Dive” event on February 3 from 10 am to 2 pm to keep the momentum going. Those interested in attending are instructed to contact Director Kathleen Hosfeld at kathleen@homesteadclt.org.