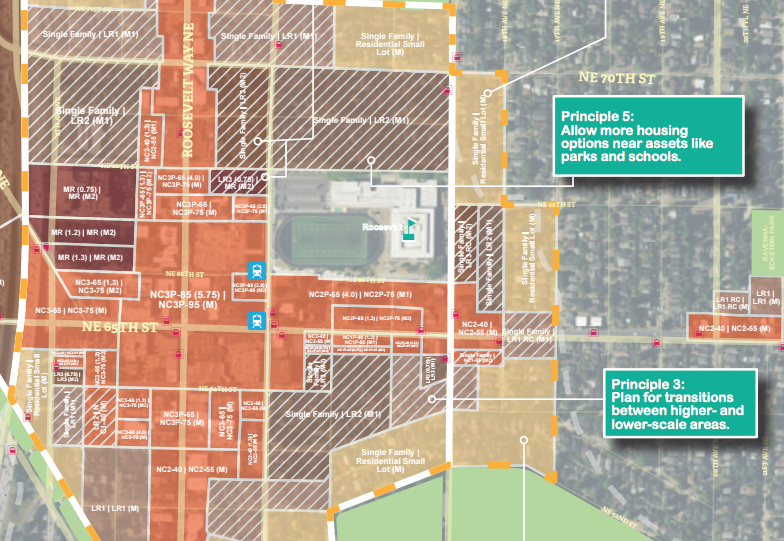 In early December last year, community members of the Roosevelt neighborhood met for a community workshop to discuss the draft Mandatory Housing Affordability (MHA) rezones for Roosevelt, a part of the city-wide Housing Affordability and Livability Agenda (HALA). The community workshop was intensely focused on the Roosevelt neighborhood itself looking at what features of the draft plan were valued or needed additional consideration. The Roosevelt Neighborhood Association’s (RNA) Land Use Committee sponsored the workshop and also circulated an online survey open to feedback through early January. By and large, the community provided great detail into priorities on transportation, public space, housing, and livability.

Summing up the findings in a report, the RNA concluded that:

Overall, Roosevelt community members welcome increased density in the neighborhood, though there were a diversity of views on how and where to incorporate new housing units. Opinions were split on a number of issues such as: the effectiveness of transitions, whether the plan will actually increase the number of units and diversity of housing, and if the plan allowed more people to take advantage of community assets.

Many participants were encouraged by the MHA requirements that will increase affordability, though a great deal of people wanted to ensure: (1) affordable “family-sized” units be created in addition to studio and 1BR apartments, and (2) affordable housing be located within Roosevelt, and not simply see developers pay into a fund to create affordable units elsewhere in the city.

There was general support for the increased zoning, particularly near the “urban core,” provided that the plan fostered walkable and pedestrian features and preserved or added community assets. This could be done, for example, by ensuring wider sidewalks and greater setbacks, plus incorporating community gathering spaces into new construction. Lastly, some viewed the Urban Village expansion (particularly east of 15th Ave NE) as “natural”, although there was often strong opposition from many Ravenna community members whose properties would now be located within the urban village and thus impacted by zoning changes.

The RNA focused on four different areas that could be affected by MHA zoning changes. Community members indicated varying priorities for each of these:

In addition to the feedback in the workshop, community members also had an opportunity to respnd to an online survey on more than a half-dozen topics.

Most respondents felt that the neighborhood has diverse transportation options and that the MHA rezones would be put where those assets are already in place and could be directed in the future. Comments from community indicated that transportation could be improved by:

Responding to three different questions on housing, the responses generated differing reactions. Only a small minority felt that the MHA rezones would encourage a wide variety of housing options (including family-sized units) while a great many were skeptical on whether the rezones would deliver affordable housing to the neighborhood. And just 50% thought that the rezones would place enough housing in the right places to benefit from community assets like transit, retail, and schools. Suggested changes by community members included:

Opinions were mixed on the issue of transition zones like the Lowrise zones between single-family housing zones and commercial and mixed-use zones. Those that did outright favor the MHA zoning approach for Roosevelt were decidedly in the minority. Regarding whether or not the transition zones provided soft height changes, the reaction was even more clear that most felt it wasn’t fine grained enough. Comments on how to better soften the zoning changes included:

A plurality of respondents expressed skepticism on the issue of whether or not expanded the neighborhood’s urban village boundaries would allow more people to benefit from community assets. But a healthy shares were also neutral and in agreement that the urban village boundaries would be a benefit. Feedback on how to improve the boundary expansion included comments suggesting that:

Most respondents didn’t believe that the MHA rezones would preserve places of historic and cultural significance in Roosevelt. But there was mixed opinions on wether or not the rezone would support livability. Comments from respondents included the need for:

What’s clear from this report is that community opinions vary greatly from issue to issue, but on some topics there is consensus. Community feedback and detailed workshops to discuss design and local issues like these are a helpful piece in threading together comprehensive visions. The question, however, is in what ways will they influence refinement of final MHA rezone proposals across city neigborhoods?