Sound Transit has announced time is running out for the contest to help name the four stations included in the Lynnwood Link light rail extension expected in 2023. Fill out the survey by April 5th to get your vote heard, but remember much like the Electoral College, the popular vote may ultimately mean very little since the survey clearly states: “the Sound Transit Board is the final authority in determining permanent station names.”

Sound Transit says it will grade along the following criteria:

Note though that Sound Transit doesn’t always follow its own guidelines. That’s how we end up with University Street station Downtown, University of Washington station by Husky Stadium, and likely University District station in a few years’ time.

Now, I reckon there’s two schools of thought on station naming: utilitarian and whimsical. I’ll review suggestions for both paths. 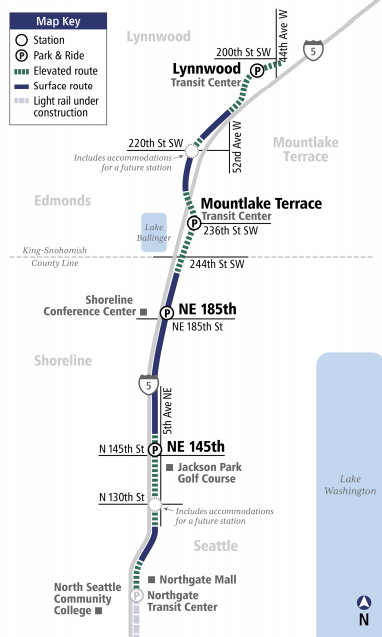 Lynnwood Link stations are going to be the urban focal points for entire cities, and workhorses for a transit system used by everyday commuters and tourists alike in great numbers. In fact, “Sound Transit estimates that the extension will serve between 63,000 and 74,000 passengers daily by 2035,” as Stephen Fesler detailed in his Lynnwood Link overview. As such, there’s a case the stations need a practical name that is legible to inexperienced users while also representing the community served with the stop. The station areas are likely to become downtowns to bedroom communities sorely lacking them. The utilitarian names are fairly obvious.

Paramount Park station is probably the only non-obvious station name among the ‘just name it for the city/neighborhood’ approach. But it has a ring to it. Unfortunately, it’s not a default option in the survey meaning it’ll need to win a write-in campaign. It seems likely the station name could become the common name for the neighborhood that grows up around the station. So we should name wisely. The perhaps better known Jackson Park Golf Course to the south–which was a default option–will be farther from the station and likely more of an obstacle for station development than a transit asset, barring my dream world solution of the City of Seattle developing the 160-acre City-owned golf course as a mixed-income high-rise neighborhood. If Lynnwood can sprout high-rises, why not Jackson Park?

Now, on the other hand, if Sound Transit is putting naming in citizens’ hands, we should probably not pick the obvious answer. What’s the point of the contest then? Let’s get creative.

For many years, Lynnwood was famous for a sketch from the Almost Live! comedy show that aired on KING 5 from 1984 to 1999 (and by the way launched the careers of Bill Nye, Joel McHale, and Jim Sharp who’s now a Comedy Central executive). The sketch parodied eighties hair styles that allegedly were especially prevalent in Lynnwood. These days, Lynnwood insists it’s so much more than big hair, but why not lean in to the stereotype to get in on the joke? The hashtaggable name is ready to take social media by storm.

Wikipedia describes Mountlake Terrace’s storied history from its clear-cutting to its poultry farming days: “By 1900, most of the land in south Snohomish County had been logged. Pope & Talbot Company, the successor entity of the Puget Mill Company, subdivided the cut area into 10-acre plots, which were sold as “chicken ranches.” These plots were sold with moderate success to ranchers raising poultry, mink, and chinchilla.” Let’s not forgot our past or neglect history.

Shoreline was originally marketed as a “shore to shore” city, but Lake Forest Park has long since blocked off its Lake Washington access, although Shoreline did keep its access to Puget Sound to the west. A patriotic play on words could give a nod to that history, while also being a tongue twister to help local youth practice their enunciation.

Sound Transit announced last year to assist with bus layover space this station would be moving north of NE 145th St by a few blocks. It’d be somewhere around where NE 147th St would exist if the grid were intact here. Let’s play on this ambiguity with a station named after an imaginary cross street. Perhaps Three Quarters could emerge as the next hot neighborhood? It’s not out of the realm of possibility after Shoreline passed a hearty upzone last year that could unlock the station’s potential.