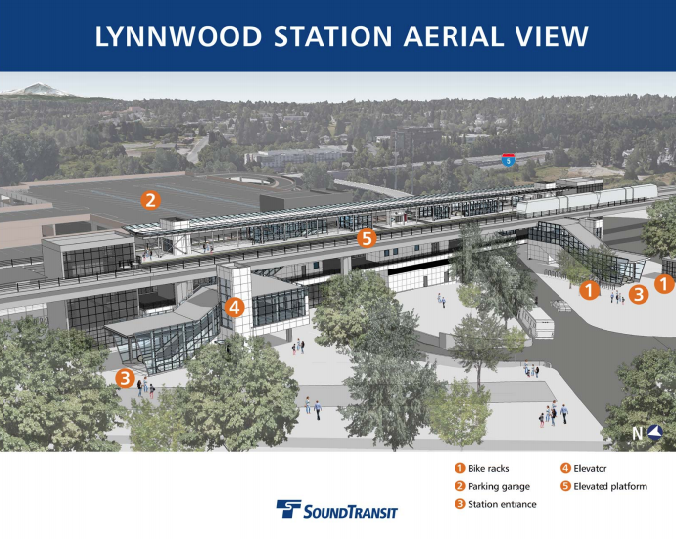 Sound Transit will extend light rail to Lynnwood by 2023 with hopes of opening service between Northgate and Lynnwood that year. The 8.5-mile light rail extension will initially open with four new stations with two in Shoreline (NE 145th St and NE 185th St) and one each in Mountlake Terrace and Lynnwood. An infill station at NE 130th St is planned to open in 2031 (but could be sped up) as part of the recently approved ST3 package. Sound Transit estimates that the extension will serve between 63,000 and 74,000 passengers daily by 2035.

The light rail alignment largely hugs I-5 with tracks planned to be situated on either of the freeway until reaching Lynnwood. The stations at NE 145th St, Mountlake Terrace, and Lynnwood will all be designed and constructed as aerial stations while the station at NE 185th St will be at-grade and built into the highway trench and embankment.

Sound Transit has come a long way its in planning process, issuing a Final Environmental Impact Statement in 2015 identifying a preferred alignment and station locations, and determining mitigation measures to local environmental impacts. The agency is now in the process of refining station designs, which will continue through 2018. At each of the design milestones (30%, 60%, and 90%), Sound Transit will released more detailed information about station amenities and features (e.g., landscaping, architecture, artwork, lighting, and facility equipment). Sound Transit is also in the process of soliciting public feedback on formal station names for each of the stations.

Sound Transit will construct Lynnwood Station at the south end of the current Lynnwood Transit Center. The station layout will see the station laying at a diagonal (somewhat parallel to I-5) with tracks coming into the station from the southwest. The alignment and location were subject to extensive scrutiny during the early environmental planning phase since the alignment must traverse a portion of Scriber Creek and the associated wetlands near Scriber Creek Park.

The bus bays at the transit center are planned to remain for local connecting service, which is operated by Community Transit. To soften the connection for passengers, a new plaza would be constructed to link the bus bays and station. A separate plaza will be constructed toward the north end of the station to create a promenade between the station and 200th St SW & 44th Ave W–what Sound Transit is referring to as a “gateway intersection”. Lynnwood has long-term plans to completely redevelop the area around the station as a new downtown with a mix of high-density residential and commercial uses–a plan that is already seeing some success. The promenade concept, if fully realized, would see new mixed-use development opening up on the edges and provide a strong visual connection for residents and workers northeast of the station.

The station at Mountlake Terrace will be located just east of the existing parking garage. The platform will be constructed above ground to create an elevated station, in part because the light rail alignment crosses over I-5 just north of the station. The platform and guideway will straddle both sides of 236th St SW with station entries and lobbies at both ends. The bus bays on the loop road next to the parking garage will remain, though the loop road will be extended to provide more bus layover space and a new exit. Some through buses may end up stopping on 236th St SW instead of entering the bus loop in the future, offering a better connection for passengers.

The conceptual layout indicates that the pedestrian facilities on NE 185th St will be improved on the north side of the bridge crossing to make the connection between the station and parking garage better for pedestrians. On the corner next to the parking garage, Sound Transit will provide a small plaza and gathering space. The same type of space will be duplicated near the station entrance on NE 185th St, and just beyond it, there will be bus bays lining the bus loop. Metro plans to provide local service from Shoreline Community College, Richmond Beach, and the north Lake Washington communities to the station while Community Transit will extend the Swift Blue Line from Aurora Village.

At the far end of the station near 8th Ave NE, Sound Transit is planning to develop two surplus sites as transit-oriented development (TOD). Presumably with 70-foot mixed-use zoning, these sites will see modest blocks of high-density residential and retail use. But more mixed-use use development in the blocks surrounding the station will likely be on the way in the coming years, due in large part to a major three-phased rezone adopted by Shoreline in 2015. Shoreline estimates that upward of 28,000 new residents and 10,000 new jobs could find their way into the station area as property redevelops under the rezone.

The plans for the NE 145th St Station have adjusted a little since this summer. Due to the constraints of the I-5 interchange and Metro’s need for more space for buses at the station, the site has moved northward to NE 148th St. The new location though will make it a little more difficult for people walking and biking to the station from the south and west since it won’t be ideally located at a prime corner like NE 145th St & 5th Ave NE. The large bus loop and location of the parking garage on the site also further hamper permeability and sight lines to the station for pedestrians and bicyclists, though it may be somewhat ideal for passengers transferring from buses (like Sound Transit’s planned SR-522 BRT route). Ultimately, pedestrians and bicyclists who want to reach the station will have to hoof it a little more.

Like the stations at Mountlake Terrace and Lynnwood, this one will also come with an elevated platform. Entrances and lobby facilities will be located at both ends of the platform. But unlike the NE 185th St, Sound Transit doesn’t plan to surplus any land for TOD. That may not matter all that much since Shoreline recently approved a significant rezone in the station area. In future years, some 5,400 new residents and 930 new jobs could be located near the station as the area redevelops.

The extension will offer transit riders a consistent and frequent service to Seattle, Sea-Tac Airport, and the Eastside once open. Travel times to the University of Washington and Downtown Seattle could be 20 and 28 minutes respectively. During weekday peak times, Sound Transit is promising frequencies as rapid as every four minutes. The new corridor will have a profound impact on mobility in the region and Snohomish County in particular when it opens.

Sound Transit is soliciting feedback on the early station design concepts like architecture, layout, station names, and artwork though today (November 30th). An online open house walks visitors through the topics in an easy-to-understand format. The agency will consider design feedback and come back in the future with refined concepts and pick station names. If you have feedback, don’t delay in participating.

Sound Transit – Lynnwood Link Boards by The Urbanist on Scribd