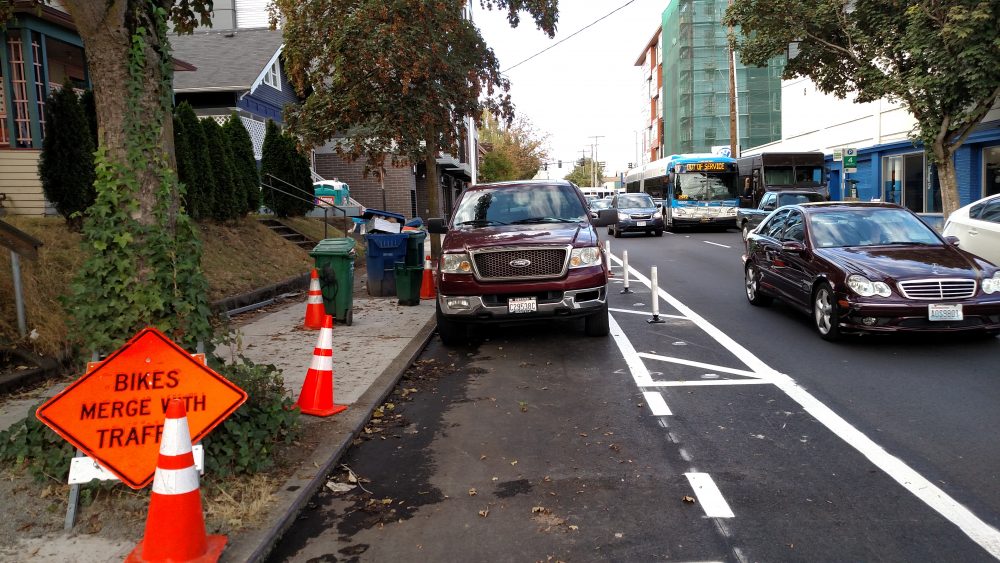 On Thursday, the Seattle Department of Construction and Inspections (SDCI) issued draft legislation that would reform how the City deals with parking requirements. SDCI promises to provide “flexibility for building owners to make parking facilities with excess capacity available for public use.”

Notably, the proposal would correct a Director’s Rule defining “Frequent Transit Service” to make it much tougher to sue to block new housing without parking based on the argument transit schedules sometime do not match reality, such as when peak hour traffic delays frequently scheduled buses. The logic here is that we should require more parking, although this induces more trip demand and further worsens traffic, slowing buses even more in absence of dedicated lanes. This was a tactic used by Livable Phinney to delay an apartment project on Greenwood Avenue.

The proposal would also correct a parking zone overlay that treated Northgate like it’s not even an Urban Village even though it’s actually an Urban Center. Large mixed-use urban developments, most prominently a light rail station-oriented affordable development, are expected in Northgate ahead of Link extending there by 2021. This change would allow them either to share parking or not build it at all.

SDCI lays the groundwork for more shared parking schemes in Seattle. The legislation would “create a new use category, ‘flexible-use parking,’ to allow for greater sharing of parking in certain zones, including in: Lowrise 3, Midrise, Highrise, most commercial, and industrial zones; and in mixed-use development garages in light rail station areas,” SDCI wrote in its bulletin.

The agency also made the connection to the City’s housing affordability goals.

“We are working to address housing affordability from all angles, including lowering the cost to build housing,” SDCI director Nathan Torgelson said. “By lowering the cost of construction and encouraging more housing near public transit, we will make Seattle more accessible and affordable to everyone who lives and works here.”

“As recommended by the Housing Affordability and Livability Agenda (HALA), this legislation also clarifies existing regulations that provide flexibility for residential projects to tailor their supply of off-street parking in accordance with demand in Urban Villages, Urban Centers and other areas served by frequent transit,” SDCI said in its release. “By reducing the provision of excess parking, this policy decreases construction costs and encourages more housing in communities best served by transit, lowering the cost of building housing overall.”

The vast majority of Seattle developments build parking, even in areas with frequent transit service, where the City of Seattle has waived parking requirements–and a big chunk of that parking goes unused.

“In Urban Centers and Urban Villages with frequent transit service, we’ve found that 87% of housing units are in developments where parking is provided. However, a recent King County study that surveyed hundreds of residential buildings countywide (including 95 in Seattle) found that 35% of residential parking garage spaces were not in use,” SDCI said. “This proposal aims to remove code barriers to allow more daily and overnight use of these unused off-street parking spaces, creating more parking opportunities for residents, visitors, and shoppers to store their vehicles off-street and walk, bike, or ride transit to get around town.

SDCI said its proposal will “allow limited surface parking for car-share vehicles in building setbacks” and “align bicycle parking requirements with industry standards (quantity, location, security).” It’d also “allow flexibility in the supply of parking in association with income-restricted housing, including housing for people with disabilities.”

Loosening parking restrictions is more than justified given the huge investments Seattle is making in transit. The region passed ST3, a multi-billion dollar 25-year investment that will add 62 miles of light rail and 64 miles of bus rapid transit to the 54 miles of light rail already funded through ST1 and ST2. Seattle also passed Move Seattle, a $930 million in multimodal transportation, including seven RapidRide lines with upgraded bus service.

Seattle transit also got a big boost from a 2014 ballot measure, expanding access to frequent service. “Approved by voters in 2014, the Seattle Transportation Benefit District has added Rapid-Ride service and improved bus frequency in many areas,” SDCI wrote. “Seattle has added over 270,000 annual service hours, improving frequency on 38 routes.”

Changes to director’s rules do not have to go through the city council, but perhaps the council could follow up on this framework with more sweeping changes, such as increasing the surface parking lot tax.

The public comment period runs until October 5. Please submit comments on the proposal to gordon.clowers@seattle.gov.

NIMBY-Proofing Our Definition Of Frequent Transit