One of the most highly anticipated spot improvements for a King County Metro bus route has long been the idea of a Denny Way bus lane. Any way for Route 8, perpetually mired in peak commute traffic, to get past Denny Way’s bumper-to-bumper traffic queuing to get on I-5 and onto the overpass to Capitol Hill would impact the lives on thousands of bus riders every single day.

In early 2016, we reported that King County Metro Transit and Seattle Department of Transportation (SDOT) were working together on a number of options to allow space for a bus-only lane eastbound on Denny Way for the 8 between Fairview Ave and Stewart Street. After a mixup between SDOT and Seattle City light (currently constructing a massive electrical substation on the north side of Denny Way at Minor Avenue) that misreported the installation time of the bus lane as late last year, we can now report that the bus lane is on track to be installed this summer, in late June or early July, according to Metro.

The final design for the bus lane repurposes one of the two lanes currently carrying westbound traffic on Denny as an eastbound lane, making space for a center bus lane. At Fairview, traffic to Capitol Hill will enter the far left lane, and traffic queuing onto I-5 will stay in the current curb lane, leaving the center lane for buses. Because there is only one lane of traffic heading straight westbound from the Denny overpass, and one turn lane coming off Stewart Street, the two lanes on Denny westbound are always under capacity. The bus lane will see a lot of traffic: during peak hours the 8 comes every 10 minutes. Currently the bus experiences extreme bunching due to congestion along Denny.

However, because the traffic getting to I-5 regularly becomes stop-and-go long before Fairview, usually backing up all the way to Westlake Ave, the bus lane may not have the revolutionary effect on 8 reliability that many hope for. Because the 8 has a stop directly before the light at Fairview, the coach must be in the curb lane all the way to the intersection. One possible way to speed up the 8 even more would be to somehow allow the bus immediately into the left lane after stopping at Westlake Ave. Eliminating the stop at Fairview is not an option–the stop is a highly-used one and will become an even more important connection with the addition of a RapidRide route along Fairview as part of the planned Eastlake-Roosevelt line. But if a transit island could be installed in place of one of the lanes at Fairview, unneeded because again there aren’t two lanes of traffic on the other side of the intersection, then the bus could stop in-lane but be lined up to get into the bus lane after the intersection. A diagram of how this could work is below.

An outlandish solution perhaps, but one worth considering if we are serious about maintaining reliability and getting bang-for-our-buck on a route that has 80+ trips per day on a corridor where demand will only grow. Converting the 8 itself into a RapidRide line is not on Metro’s immediate plans, but is in its long-range plan as a goal by 2040, at which point Metro envisions the 8 using Fairview to get to the bus corridor created on Harrison Street to connect to the planned South Lake Union at what is now Aurora Avenue.

Another way to speed up the 8 during its most bogged-down portion is something that was considered for another project: the Westlake Ave transit lanes. At Denny and Westlake, SDOT and Metro originally proposed eliminating right turns from Westlake onto Denny to keep vehicles out of the transit lane, used by the South Lake Union streetcar, the RapidRide C, and the Route 40. In order to accommodate this, improvements would have had to have been made to the Westlake and Lenora intersection to provide drivers another way to get to I-5, otherwise everyone would be forced onto Mercer Street. This change was ultimately not implemented with the changes to Westlake to provide dedicated transit lanes. Instead at Denny and Westlake, a right turn arrow prioritizes vehicles to turn out of the transit lane. Frequently this results in light cycles where no vehicles turn right yet the dozens of pedestrians at what is likely South Lake Union’s busiest intersection for people walking hold for 15 seconds before getting a walk signal.

The traffic study performed on the elimination of right turns suggested maintaining right turns onto Denny, coupled with diversion from the Westlake lanes themselves, would lead to delays for the 8, as outlined in the chart below.

Along the path of the Denny bus lane, improvements are also on the way for pedestrians on the corridor. Before or at the same time the bus lane is being installed, Seattle City Light is set to work with SDOT to install a pedestrian signal and a crosswalk across Denny Way at Minor Avenue, at the southwest corner of its new substation. This improvement was part of the public benefits package that accompanied the city’s vacation of Pontius Ave, where the substation is currently being constructed. The reconnection of the street grid at an impossible-to-cross location currently will provide a big win to people using Denny Way on foot. The substation is also planning on significantly widening the sidewalks along the Denny Way frontage, though Seattle City Light planners didn’t seem to worry about pedestrian comfort during the two-year construction phase, including a brief period last year where, due to construction across the street, both sidewalks between Minor and Stewart were closed at the same time.

Elsewhere along the 8 route, SDOT is also installing bus bulbs at several stops in Capitol Hill, in coordination with an Neighborhood Street Fund grant that will be improving intersections along the entire John Street and Thomas Street corridor between Broadway and 23rd Ave. 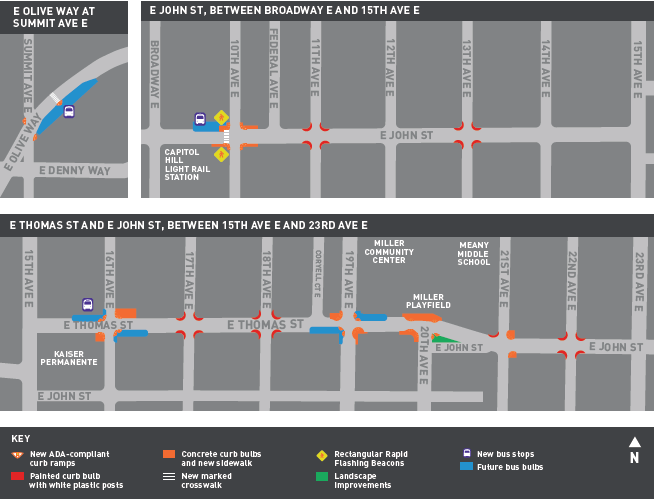 Significantly, this will have a ripple effect on pedestrian safety through a busy part of the corridor, E Olive Way between Denny and Broadway. E Olive Way is technically two lanes each way at this stretch, despite a pedestrian crossing at Boylston where it narrows to one. As a result, drivers speed frequently and do regularly do not yield at unmarked crosswalks in this very dense section of Capitol Hill. With the installation of a curb bulb for the eastbound 8 at Summit Ave, the project website states, “when the project is complete, eastbound E Olive Way will be permanently reduced to one lane in this segment of road.” A de facto road diet will allow speed up one of Seattle’s most important buses. Win/win.

Incrementally, spot improvements are making things easier on this essential route connecting the city’s cultural centers together. Unfortunately, many of the improvements are simply nibbling at the edges to avoid serious impact to the lives of people driving alone. With the needs of so many people competing for the same stretch of street, soon there won’t be easy choices left to make.

A Plan To Fix The Perpetually Late Route 8