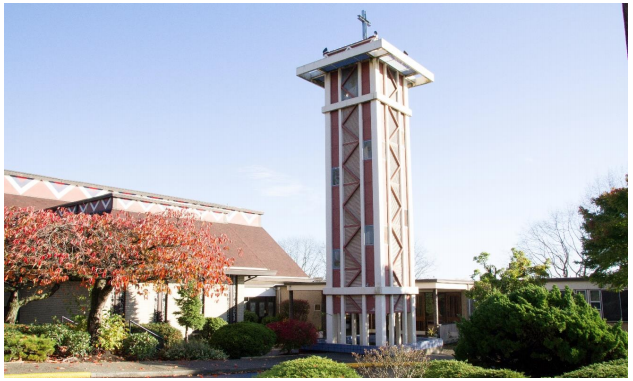 On Monday, the Seattle City Council met for a relatively light legislative session on policy substance. However, councilmembers approved a new Central District landmark in the form of a culturally-significant church and gave reauthorization for a longstanding homeless shelter lease in SoDo. Councilmembers will take up some hefty discussion in this shortened holiday week on changes to the Proposition 1 citywide transit service program and a draft proposal for reauthorization of the education levy, the latter of which is slated to go to the voters later this fall as a ballot measure.

The Mount Zion Baptist Church was formally registered by the city council as a new landmark. In a rare instance, the church checked all six of the possible eligibility criteria to receive designation as a city landmark. The design of the church is somewhat reminsicent of the kind of bold, modernist architecture found during the 1960s and 1970s but also reflects the cultural identity of parishioners.

The church campus is situated on a sprawling lot (1634 Reverend Dr. S. McKinney Avenue) located to the southeast of the E Madison St and 19th Ave intersection and includes several structures and notable bell tower. Preservation controls will apply to the entire site, building exterior of the church, bell tower, and educational space, interior of the church sanctuary, and the “Oracle of Truth” sculpture. In exchange for preservation controls, the property will be eligible for several incentives, such as parking reductions and exceptions from the Seattle Energy Code and Seattle Building Code.

Separately, the city council approved an extended lease for a men’s shelter in SoDO. The lease will last for another five years allowing Catholic Community Services of Western Washington (CCSWW) to continue operating the St. Martin de Porres Shelter–which is named after the patron saint of poor people, innkeepers, and social justice–in a warehouse owned by the United States Department of the Army. The shelter has been in place for 33 years now.

At the military warehouse, a total of 13,000 square feet is dedicated to emergency overnight shelter space for men over the age of 50. The shelter accommodates up to 212 men per night and on average has an occupancy rate of 97%, which is indicative of just how much need there is for emergency shelter in Seattle. In terms of the lease agreement, the city is only on the hook for paying the cost of utilities and custodial services while CCSWW and army are responsible for other day-to-day and long-term aspects of running the shelter.

This week, the city council will take up a public hearing on modifying the terms of Proposition 1 (the Seattle Transportation Benefit District that funds enhanced bus service) and considering the terms for reauthorization of citywide education levy that voters will have a chance to weigh in on this November.

Additionally, the city council is asked to increase the overall budget control levels for the Seattle Transportation Benefit District activities by $2 million for 2018.

In terms of the education levy, the city council will consider the baseline proposal put forth by the Mayor’s Office, which would make several substantial changes to the status quo and set revenues for the seven-year levy $619.6 million. Changes included in the executive recommended plan would establish the Seattle Promise program for city-funded student tuition for local community colleges, adding several new health centers in middle and high schools, doubling the size of the subsidized preschool program, and increasing funding for local schools generally. The proposal, however, does contain changes to how existing programs would be funded–possibly by non-levy sources–or restructures to programs entirely. A final version of the levy measure is expected to pass out of the city council in mid-June.