Seattle’s homeless population continues to grow according to recently released 2018 One Night Count results. Conducted on January 26th, the 2018 count tallied 12,112 homeless people in King County with 6,320 of them unsheltered. This represents a 15% gain over January 2017, when the point-in-time count found 5,485 unsheltered people in the county. The county’s unsheltered count has been climbing steadily since 2011, when it stood at 2,442.

The composition of the unsheltered population also changed. 1,058 more people are living in vehicles, a 46% increase. People living in tents, meanwhile, decreased by 214 individuals.

Seattle continues to see steep rent increases, and the lack of affordable housing seems to be driving the crisis. 98% of Count Us In Survey respondents said they would move into safe and affordable housing if it were offered, All Home’s report said. Regional leaders are seeking to increase affordable housing supply, although perhaps not with the decisiveness that advocates would hope. Earlier this month, Mayor Jenny Durkan called for a regional partnership to tackle homelessness and the Seattle City Council passed an employee hours tax to fund affordable housing, nearly cutting in half after Amazon threatened to pull out of town and Mayor Durkan threatened a veto. Mayor Durkan held a press conference on Wednesday to announce investments in emergency shelter and rent vouchers.

All Home, the nonprofit that conducts the Count Us In survey and analysis for the county, pointed to some good news in the data: targeted investments are driving down the homeless rate among veterans (which dropped 31%) and among youth (which dropped 22%). 1,776 households avoided homelessness and exited the “homeless system” by obtaining stable housing in 2017. 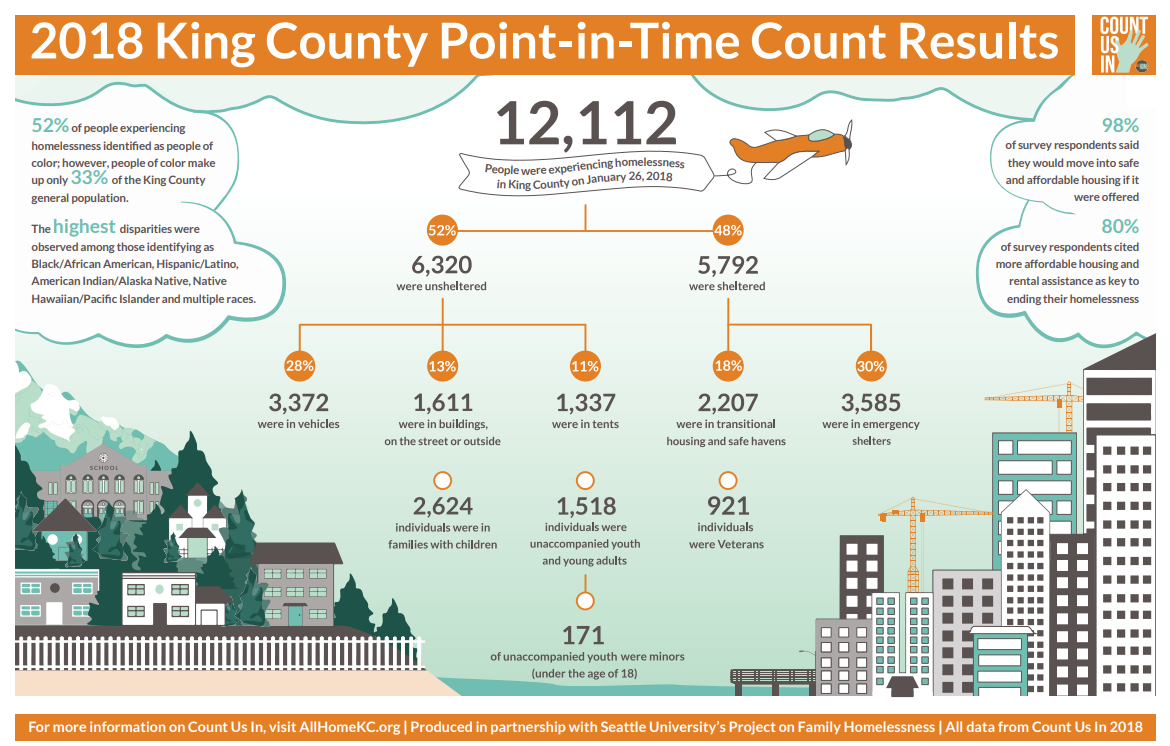 The Count Us In survey continues to find a disparate impact with people of color representing a majority of the count (52%) but only a third of the county’s population. LGBTQ+ individuals are also disproportionately affected, especially among the younger portion of the homeless population. “One-third (33%) of unaccompanied youth and young adults under 25 years old identified as LGBTQ+, compared to 16% of all other survey respondents,” the report said. All Home compared this to a baseline of 4.8% of the general population in the Seattle metropolitan region that identified as gay, lesbian, bisexual or transgender in a 2015 Gallop poll. Domestic violence survivors and foster care recipients continue to make up a much larger share of the homeless population than the general population.

For policymakers and housing advocates, the 2018 point-in-count shows that much work remains to be done to close the housing gap  6,320 neighbors remain without shelter in one of the wealthiest cities on the planet.

To make matters worse, not everyone is pitching in. Funding levels vary widely city to city. Moreover, five cities in the region had active moratoriums on building new housing last fall. It’s not clear what a region-wide effort to address homelessness would look like, but it’s probably not this.