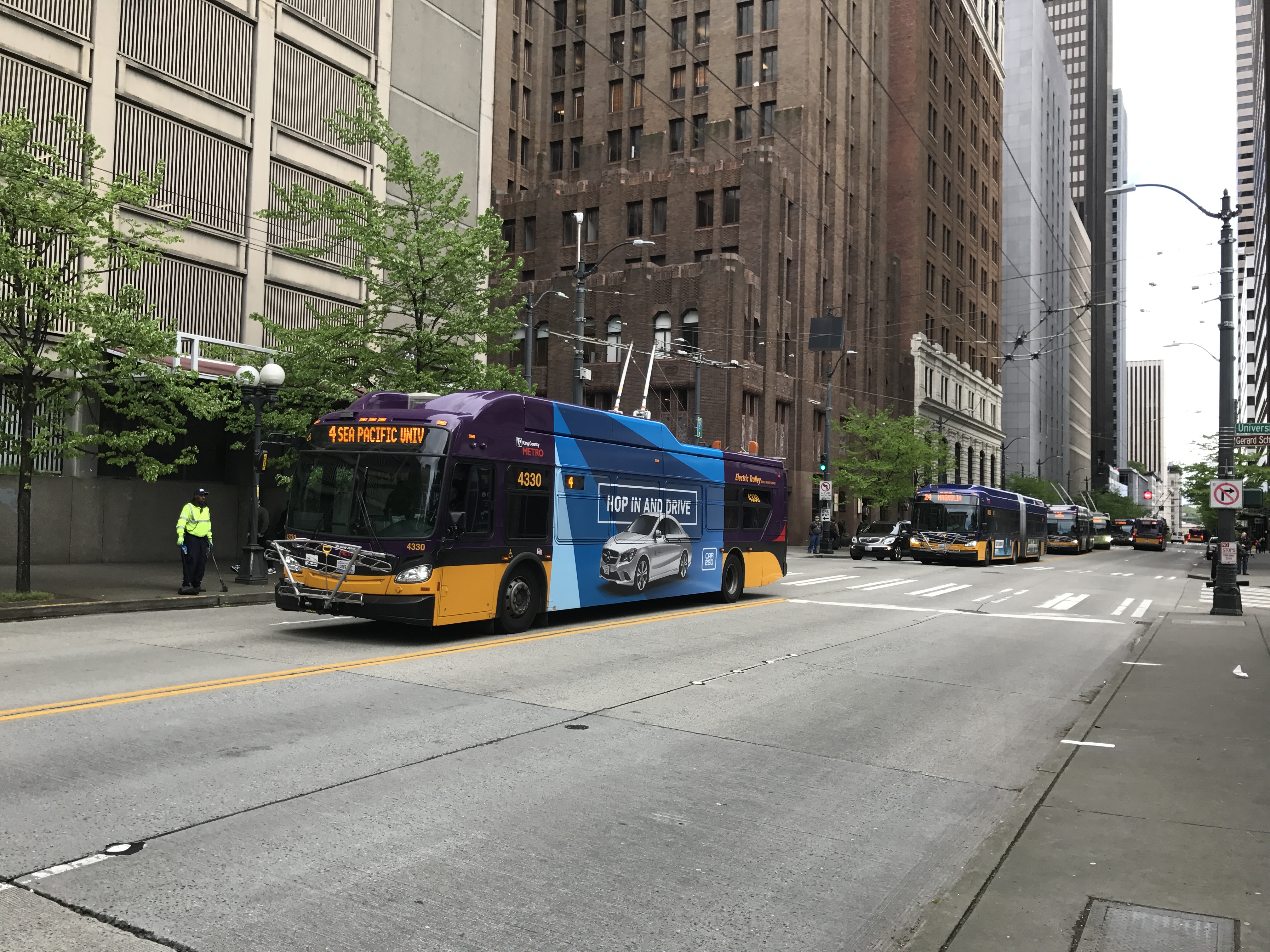 The Amazon agreement is the latest private sector contract for transit service that Metro has received. Microsoft and Boeing contract with Metro special service to connect employees to their suburban campuses, and Amazon has also sponsored a streetcar and some operations on the South Lake Union line. David Rolf, a local labor leader, expressed serious criticism on Twitter over Amazon picking and choosing which public services they want to support. The company recently opposed and defeated a plan to boost affordable housing funding and homelessness services via a special tax on large employers operating in the city.

Stunning: a corporation deciding which public services it approves of, and funding government as if it were a charity. While killing progressive tax reform.

⁦@kcmetrobus⁩ should decline this corrupting and anti-democratic “gift.”

On a countywide-basis, Metro will boost annual service hours by 62,000 improving service on dozens of routes in the suburbs and Seattle alike. Under the terms of the STBD, Metro is still obliged to improve service in Seattle as funding resources become available at the countywide level. Funds from the STBD cannot be used by Metro to supplant service increases that would otherwise be due to the city in absence of STBD funds. In other words, STBD funds are used exclusively to purchase service above and beyond the ordinary service baseline and service guidelines.

In Seattle alone, 22 extra weekday trips will be added to the roster from Amazon’s share of service hour investments with trips going to Routes 8, 40, 62, and 63 and the RapidRide E and C Lines, serving communities from as far north as Shoreline and as far south as Westwood Village in West Seattle. Meanwhile, the STBD service hour investments will go toward 12 routes, providing more than 50 extra trips each weekday. Metro says that Routes 41 and 70 will be upgraded to provide more 10-minute frequencies. Another theme will be improving peak-hour capacity and relieving crowding by adding new trips to Routes 8, 17, 18, 40, and 56 in addition to the RapidRide C, D, and E Lines. Lastly, extra late-evening trips will be added to Routes 7 and 106 in Southeast Seattle and Renton.

A shining star amongst Metro’s route network, the RapidRide E Line will receive special attention in the fall service change. 14 extra trips each weekday and additional schedule padding will be doled out to the route, which Metro hopes will continue growth beyond the 17,000 daily weekday riders that the route carries today. Nine southbound trips and five nouthbound trips will be added each weekday, which should improve peak-hour frequencies and reduce overall crowding. The change will actually have buses on the corridor arrive as few as every four minutes during the 7am hour in the southbound direction and 4pm/5pm hour in the northbound direction. Average wait times will also shorten throughout other hours during weekdays.

Some routes like the 106 and RapidRide E Line were not eligible for STBD funding until the revenue use terms were modified by the Seattle City Council in June, which now permit:

Coinciding with the fall service change, SDOT will roll out new restrictions on Third Avenue in September to improve bus speed, capacity, and reliability. The long-standing non-transit motorized restrictions will be expanded to seven days a week instead of just Monday through Friday for transit priority. General traffic will also be prohibited from 6am to 7pm, except that commercial vehicles will be permitted to drive on Third Avenue between 9am and 3pm, provided that they don’t make left turns from Third Avenue. Outside of transit priority hours, SDOT will still prohibit left turns off of Third Avenue for all general traffic. These change were a part of the One Center City planning effort to deal with an expected jump in Downtown congestion the next two years.

Looking ahead, SDOT will deploy ORCA card reader kiosks all stops on Third Avenue for off-board fare payment in March. This will enable all-door boarding for all buses operating on the corridor. Metro also plans to add up to another 100,000 service hours for Seattle routes in 2019 and 2020, meeting SDOT’s service level objectives for the STBD. However, those additional service hours will largely be spread out to off-peak periods where Metro has anticipates available equipment and operators. Despite a major ramp-up in operator hiring, bus bases are a key capacity constraint since Metro will need to store nearly 1,600 buses this fall, essentially reaching the upper end of storage capacity. Metro plans to come up with interim solutions to increase bus base capacity—and thereby allow for more peak-hour operations—but ultimately a new bus base, likely in South King County, will be necessary.