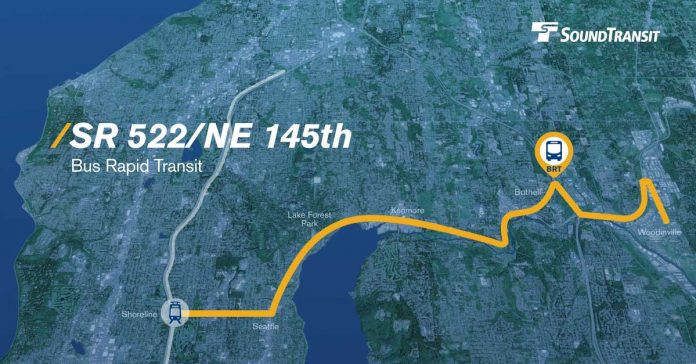 Sound Transit is planning to bring bus rapid transit (BRT), now known as Stride, to the SR-522 corridor, running between Shoreline and Woodinville, by 2024. The eight-mile line is expected to cost up to $386 million and serve 10,000 daily riders. Over the summer, the transit agency kicked its planning process for the corridor. Now Sound Transit is seeking feedback on corridor and station refinements to a preliminary plan that was released last week.

According to Sound Transit, key refinements that reflect community priorities include:

Much of the SR-522 corridor already has business access and transit (BAT) lanes to help move buses swiftly through communities. But Sound Transit is proposing several new stretches so that all portions (both directions) of the highway have them between NE 145th St and 96th Ave NE in Bothell. Sound Transit also plans to add BAT lanes on other segments of the corridor, too, like near the NE 145th St light rail station in Shoreline.

Investments in better intersections is also a high priority to help move buses. So far 11 intersections have been identified as a priority, primarily along NE 145th St and in Bothell’s city center. Several stops along the corridor have been identified as provisional, meaning that they are not guaranteed, but could find their way into the final project if policymakers decide they are worth pursuing and grant appropriate funding for them.

Service to Woodinville, however, remains a concern for Sound Transit. The plan has been to provide service at 20-minute frequencies, half that of the main BRT corridor. Planners are concerned that the Woodinville segment could lead to overall service delay to the core of the line. Sound Transit wants to explore an alternative way to serve the segment, which may mean not using BRT at all. Could ST Express or King County Metro become a stand-in for the connection? That is still unclear.

For the NE 145th St segment, Sound Transit is planning four stop pairs along the street. The one planned at 25th Ave NE is still under review and may not make the cut. Several other improvements under consideration, include:

A major issue that still needs to be sorted out is whether or not roundabouts will be constructed on NE 145th St near the I-5 interchange and 5th Ave NE. Noticeably lacking from the proposal, however, is new bicycle lanes on nearby streets to be consistent with the Seattle Bicycle Master Plan and any new pedestrian crossings. Similar flaws are rampant along the whole corridor, focusing exclusively on service and reliability instead of stop access, but are particularly acute in Shoreline and Seattle where residential densities are much higher–although development is picking up along the route.

The Lake Forest Park corridor stretch will include three stop pairs, one of which is still considered provisional at NE 165th St. Sound Transit is also planning a new parking garage at the Lake Forest Park Town Center, a new sidewalk on the east side of the highway where the BAT is installed, and transit signal priority at all signalized intersections.

The Kenmore segment could get four stop pairs, including two provisional ones at 61st Ave NE and 80th Ave NE. Sound Transit is also planning a 300-space parking garage at the Kenmore Park & Ride, which is located at 73rd Ave NE, and transit signal priority at all signalized intersections.

In Bothell, Sound Transit is planning four stops pairs. One of these would be near UW Bothell/Cascadia College and another at the I-405 interchange. The latter would provide a direction connection opportunity to Sound Transit’s other BRT line being planned on I-405. Additionally, a new 300-space parking garage is planned for the surface parking lot at Pop Keeney Stadium in Bothell’s city center as well as:

A key challenge with this portion of the planned alignment is direct service to the UW Bothell/Cascadia College campus. The closest stop to the heart of the campus would be a quarter-mile away, just west of 110th Ave NE.

Another issue is how the alignment would provide a connection to the I-405 BRT line being planned. Buses running on I-405 will have stops on opposite sides of the freeway instead of at a consolidated location as a center freeway stop, making connections a bit more challenging for riders wanting to switch between routes. The pedestrian environment at the Beardslee Blvd interchange is not a particularly great one.

To complicate matters further, Community Transit’s Swift Green Line (opening in March) will terminate one stop up on the I-405 BRT line at Canyon Park, meaning that riders will have to make two transfers to reach the local BRT line in Snohomish County. Community Transit may eventually resolve this by extending the line further into Bothell with service to the UW Bothell/Cascadia College campus and city center.

The refinements are open to feedback, which can be made segment by segment online. In the coming weeks, Sound Transit will work with other agencies, elected leaders in the project area, and then request that the Sound Transit Board of Directors approves proceeding with the next phase of the project process: conceptual engineering and environmental review. Over the next two years, Sound Transit hopes to look at roadway design elements in more detail, parking facilities, stop access and circulation, landscaping, public art, and wayfinding.