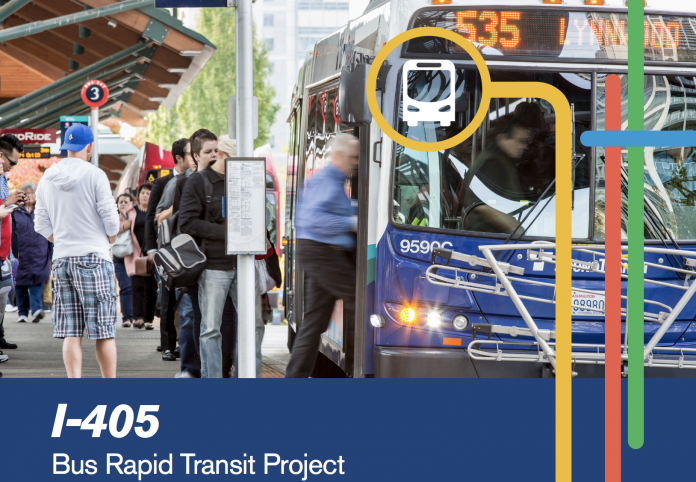 Sound Transit recently released a report on project refinements for bus rapid transit (BRT) on I-405, planned for first operation in 2024. The corridor will feature two independent BRT lines, which will meet in Bellevue; the lines will separately run from terminals in Lynnwood and Burien to the Bellevue Transit Center (and home of a future light rail station in 2024), which should help maintain better operation and reliability of the system. As proposed, the refined I-405 BRT project would serve 11 stations and handle up to 25,800 daily boardings by 2042.

Under the original plan, ridership on the corridor as a whole was projected to reach up to 22,200 daily riders with the southern half of the corridor performing considerably less well than the north. Sound Transit’s proposed project refinements, however, would increase ridership by up to 3,600 daily riders to 25,800, boosting ridership a further 17%. Both lines would serve about equal numbers of riders, and greatly bolster performance on the southern half of the corridor. The higher numbers under both scenarios are predicated on greater use of high occupancy toll lanes on I-405 and more transit-oriented development near stations. The low end forecasts still paint a similar picture of performance by corridor, albeit with lower overall ridership.

As the planning process has moved forward, Sound Transit has developed a variety of other project refinements along the corridor. Strategies that have been identified to speed up buses and improve reliability include things like:

Refinements like the above are identified in the maps below:

In January, The Urbanist also provided a deeper dive by station location describing the kinds of refinements under consideration by Sound Transit. At that time, Sound Transit had also given the BRT program a formal brand called ‘Stride’. The project is now moving into its next phase, which will involve environmental review and early engineering. Sound Transit plans to continue engagement throughout that process to design project elements in finer detail.

The success of the project though heavily hinges on partially tolling I-405. That is a highly fraught proposition with state politicians handwringing over whether or not to expand the use of tolls on I-405. Not expanding tolling could end up meaning that improvements to the corridor would have to be put on hold, delayed, or greatly trimmed down. Ultimately, that could result in a less robust I-405 BRT project and drive down ridership.