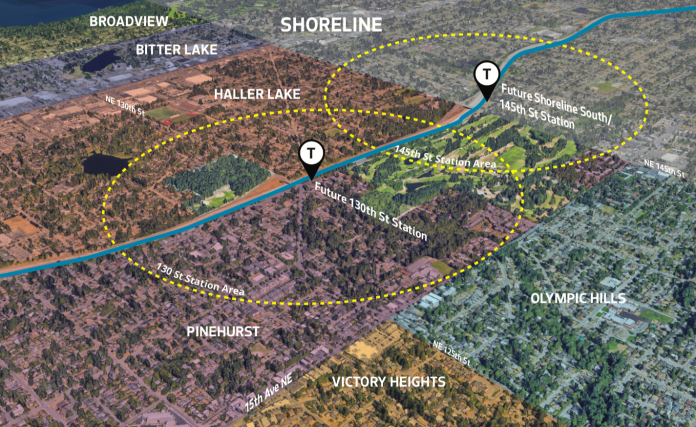 At a recent light rail station planning event for future Link stations at NE 130th Street NE and NE 145th Street, people crowded into Church of the Nazarene on 5th Avenue NE, and spent hours mapping out their hopes for what the two stations could bring their communities. Those North Seattle communities are more linguistically-diverse, lower-income, and home to a higher proportion of households with children than the Seattle average.

Participants spoke of the dire need for better sidewalks and bike lanes throughout the station planning area, which extends for a half-mile out from the light rail stations at NE 145th Street and NE 130th Street. They called for better bus connections to serve not just the future Link stations, but also other neighborhood destinations like schools. More placemaking that enhances existing and create new community hubs was another frequently-cited desire. Additionally, the concept of lidding I-5 to reunify neighborhoods currently separated by the freeway and increase opportunities for housing, businesses, and open space near the future light rail stations was brought up by all of the work groups.

But for all of the participants’ enthusiasm for helping to plan the future of their neighborhoods, a big question cast its shadow over the event: Would service at the NE 130th Street station begin in 2031, as currently planned, or would its opening be bumped up to 2024 when service is expected to begin at the NE 145th Street station?

Within in a couple months, residents should expect to have a definitive answer. Sound Transit has committed to making a final decision by then end of this year, and the specific date of November 21st has been floated as the exact date on which Sound Transit’s board could issue a final decision on the timetable for NE 130th Street station. Residents also reviewed three approaches to upzoning near the future station–options dubbed Walksheds, Neighborhood Corridors, and Neighborhood Hubs.

Financial pressures could sink case for 2024

The same group of neighbors who originally came together to advocate for a Link light rail infill station at NE 130th Street has come back together to push for a 2024 opening date for the station. Currently, NE 130th Street is the only station within the Lynnwood Link Extension that is not currently expected to begin service in 2024, putting it seven years behind nearby stations.

The case in favor of a 2024 opening date for the station is a strong one, and it has received support from organizations like the 32nd District Democrats. Opening light rail stations that run on the same line is often more cost and resource efficient, and it avoids potential service disruptions later on. This is why the three stations that make up the Northgate Link Extension (U District, Roosevelt, and Northgate) are all planned to begin service in 2021.

But while it could potentially save money in the long run, moving up construction plans for the NE 130th Street infill station requires that Sound Transit increase financial investment right now.

And with a Tim Eyman-backed flat $30 car tab Initiative 976 (I-976) on the ballot this November, financial peril for the agency is real. If I-976 passes, Sound Transit could watch $13 billion or more disappear from its budget over a 20-year period, the agency says. Understandably, Sound Transit is unwilling to make a commitment on 130th Street Station until it is sure that its financial future is more certain.

While I-976 would likely eliminate the opportunity to open NE 130th Street station in 2024, another threat exists as well. If Sound Transit decides it does not have the funding to take on the full station construction and planning costs at this time, it could opt to finish the parts of the track and subterranean station at the same time as work is completed on the rest of the Lynnwood Link Extension line, but wait until 2031 to complete above ground construction and open service.

Philip Duggan, an advocate for the NE 130th Street station who is active with the Pinehurst Community Council, calls such a prospect “chilling.”

“It would be really disheartening to wait for seven years for the station to open, knowing all that time the infrastructure is in place underground,” Duggan said.

Like Graham Street South light rail station in Southeast Seattle, also currently scheduled to open in 2031, the NE 130th Street station is an “infill station,” meaning it will have a smaller footprint and unlike the nearby NE 145th Street station, which will have parking for 500 vehicles, there are no plans for parking onsite.

This means that more people will access the station on foot or by bike, thus increasing the need for safer and more comfortable pedestrian and cyclist infrastructure throughout the station planning area.

At the community workshop, the City of Seattle solicited feedback from the community on three different scenarios for how to adapt zoning around the two future light rail stations.

In the first scenario, the zoning changes bringing a great mix of housing types, businesses and gathering places would be focused on a 10- to 15-minute walkshed surrounding both the NE 130th Street and NE 145th Street light rail stations. The walkshed approach would make more zoning changes within areas that currently are zoned for single-family residences.

By contrast, a second scenario would direct future zoning changes to existing neighborhood corridors, extending out further in an east-west pattern than the walkshed scenario would. Future development would occur on and near arterials like NE 130th Street and NE 145th Street, leaving more single-family residence zoned areas unchanged. One benefit of this approach would be the connections it would create between outlying neighborhoods like Haller Lake to the west and Lake City to the east.

The final scenario makes zoning changes in existing neighborhood hubs to build in an existing commercially- and multifamily-zoned area. Two existing neighborhood hubs have been singled out for future growth, one in Pinehurst near NE 125th Street roughly between Roosevelt Way NE and 15th Avenue NE, and the other at the intersection of Roosevelt Way NE and 1st Avenue N a bit northeast of Haller Lake. This approach is similar to the urban village strategy that has guided much of Seattle’s neighborhood planning for decades.

While each of the scenarios has its benefits and drawbacks, it is clear that opening NE 130th Street station in 2024, would be a net positive for all three. Providing residents with more light rail choices closer to where they live and creating opportunity for more station access that is not dependent on park-and-ride automobile planning, would allow for the community and city planners to shape future growth in a manner that’s more focused on creating holistic neighborhoods. This is sorely needed in an area of Seattle that is dominated by the presence of I-5 and arterials like NE 145th Street.

The City is currently encouraging public participation and idea sharing through an interactive community feedback map. Readers who are interested in following the City’s station planning efforts should sign up for email updates with the City of Seattle. A draft of the community vision for the station area is expected to be shared with the public in early December.

Supporters can track updates and learn about opportunities to show support for opening in 2024 on the 130th Street Link Light Rail Facebook page.