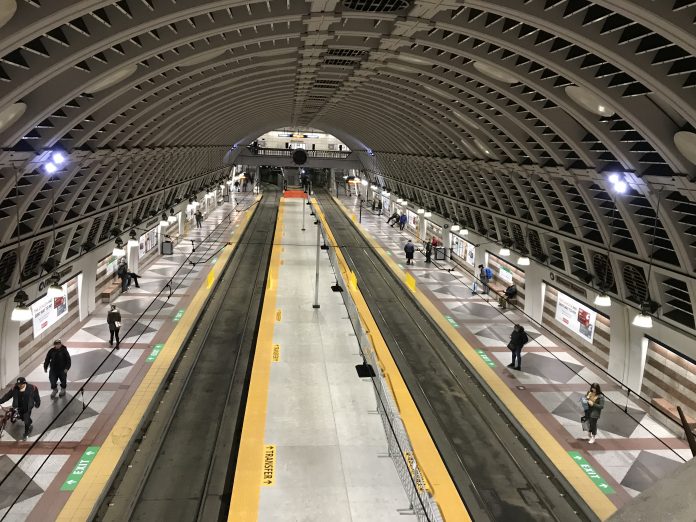 For months, Sound Transit has been gearing up for the Connect 2020 project, the 10-week construction effort to tie the East Link light rail extension into Central Link that began this weekend. The transit agency commissioned construction crews to install a temporary center platform at Pioneer Square Station in the fall. This platform will allow riders to swap trains at the station and facilitate a delicate dance of trains through the construction zone (where one track will need to be closed at any given time). While designed as a temporary facility, the platform could prove useful as a permanent feature once the East Link extension opens if it is upgraded.

Why Sound Transit should make the platform permanent

As it stands now, all stations from International District/Chinatown Station through Westlake Station have side platforms only. That means if riders want to change platforms, they have to first scale stairs or use escalators or elevators to reach the mezzanine level and then do the same to reach the opposite platform. This can be tedious and inconvenient for riders when in a rush, but isn’t terribly common to do under the current operational circumstances. That will change in a few short years.

Once the East Link extension opens, International District/Chinatown Station will become an even more important transit hub because it will be the last–and most southern–point where East Link and Central Link meet. For people coming from the Rainier Valley or the airport who want to go to the Eastside–or vice versa–the station will be the main transfer point between the respective light rail lines. Unfortunately for these riders, the station will necessitate a transfer by changing platforms entirely because of how the two lines are planned to operate through it. A center platform would simplify transfers by allowing riders to merely walk across the other side of the platform and board their connecting trains.

The Connect 2020 work that Sound Transit is beginning this weekend, however, will permanently preclude a center platform at International District/Chinatown Station. This is partly because the tie-in tracks for East Link will be constructed just south of the station. But the larger issue is that a turnback track will be installed at the station between the two existing tracks that serve the station platforms. This turnback track is supposed to support the operational needs of the mainline tracks serving Central Link and East Link to the south and east.

For riders with origins or destinations from International District/Chinatown Station northward, the transfer issue is not terribly relevant since trains on both lines will stop at all stations as far as Northgate (in 2023) and Lynnwood (in 2024). Eventually, East Link will terminate at Mariner Station (near the edge of Everett), which could pose a challenge for riders north of the line. That will not happen until 2036, and riders could just swap trains using the same platform at any station from there to International District/Chinatown Station.

A permanent center platform at Pioneer Square Station, however, seems like a sensible alternative in light of one being ruled out at International District/Chinatown Station. Upgrading the temporary center platform that has been installed could be cost-effective. It could also provide two key benefits to the light rail system:

Obstacles with the center platform

There are some obstacles to making Pioneer Square Station’s temporary center platform a permanent fixture of the system. The most significant one may be ingress and egress. Sound Transit constructed the platform to only provide direct train-to-train changes, with no staircase access the mezzanine level. In the event of an emergency, riders would need to scurry across the tracks to the nearest platform and then head up the nearest stairs to reach ground level.

Sound Transit could solve the platform access problem with the installation of staircases and elevators. The center platform is roughly 16.75 feet wide between the yellow warning edge strips, which is similar to the individual side platform widths at the station. As the tracks reach the station ends to enter the tunnel tubes they flare out, increasing the width of the median between them. So, it’s conceivable that staircases and elevators could be installed on both ends of the center platform, but structural considerations, operational flow, and safety requirements could also work to limit where they could go and whether they would work on both ends.

Still, the center platform width is enough to accommodate passenger flow onto and off of the platform as well as boarding and disembarking multiple trains at the same time. There is also room to install information kiosks, wayfinding, lighting, and a limited amount of benches/lean rails.

Another challenge with a permanent center platform is intuitive rider usability. Having three platforms at the station and train doors opening on two sides at the same time could be confusing to riders. At minimum, signage in the station, on platforms, and onboard the trains would need to be clear about the purpose of individual platforms and train door exits. Onboard trains and in-station announcements may also be necessary to reassure riders of their options. Sound Transit’s recent wayfinding signage has demystified station navigation, so with similar imagination the usability problem seems solvable.

A third major obstacle to making the center platform permanent is authorizing and upgrading it. The Sound Transit agency would need to go through a procurement and design process and seek approval from its board of directors for the project, perhaps as an add-on to the East Link project. Given the small scope of the project, the upgrades would likely be several million dollars, especially if escalators become part of the equation and substantial work to shore up the mezzanines is required.

Fortunately, East Link has so far largely come in on budget, which may provide some financial flexibility to authorize the added project expenditure. It also bears mentioning that significant expenditures have already been made to install the center platform. Ripping it out comes with real costs–both in terms of money and service disruptions. With East Link service still several years away (early to late 2023), there is a fair bit of time to upgrade the center platform with mezzanine access if Sound Transit takes action to pursue its retention and thereby the rider experience.