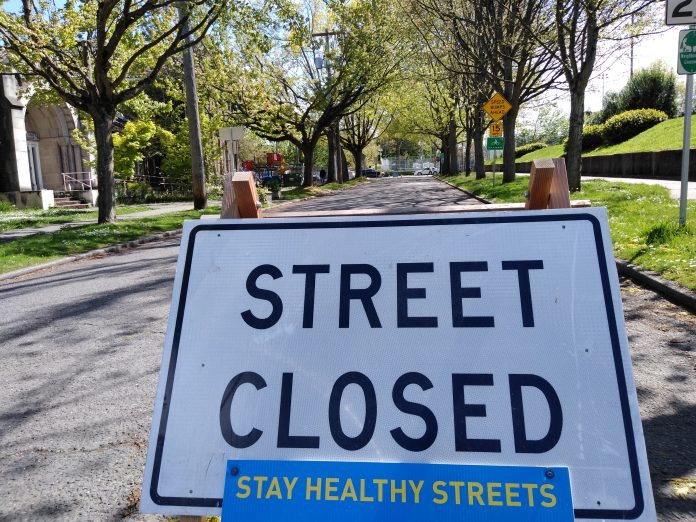 On Friday, when the Seattle Department of Transportation (SDOT) announced its third set of streets open to people walking and rolling, calming them for people on bicycles as well, the list did not include any streets inside Seattle’s densest neighborhoods. Downtown, Belltown, South Lake Union, First Hill, the University District, and Northgate all fall into the category of an “urban center” neighborhood and no plans have been announced for the residents in those neighborhoods to more safely use the city’s street space to get around without a car.

What urban centers do have is a massive amount of street right-of-way. Over 1,300 acres in urban centers are streets–more than two square miles. That’s over one in three acres devoted to travel and parking lanes. They are currently frozen in amber, an unneeded street system that’s wildly under capacity, encouraging dangerous driving. Sidewalks outside critical neighborhood businesses like grocery stores remain mostly as they existed before a COVID-19 world, despite the intense pressure that is being placed on these spaces. Over a month into the stay-at-home order, we need to act more nimbly to adapt our public spaces to our current needs. This is true absolutely everywhere, but it is felt most acutely in neighborhoods that have the most people living closely together.

Seattle’s growth strategy is pretty simple: build most new housing in urban centers and urban villages, and not much elsewhere. Between 2016 and 2019, Seattle added just over 34,000 units of housing, an increase of 1 unit for every 10 that existed in the entire city before then, in just four years. Of those units, over half were built in Seattle’s urban centers, which sit on just 7% of Seattle’s total land area, an increase of 22% in those urban centers.

For every acre of developable land inside the urban centers, Seattle now has over 41 units of housing sitting on it. Contrast that with just under seven units per acre in the single-family neighborhoods, almost six times fewer. During a crisis that impacts how far apart people need to be from one another while walking outside their homes, we simply need to add more space.

Streets in our urban centers are likely going to be harder to open safely for people. They are likely higher trafficked, with more frequent deliveries and emergency access needed. These are also reasons why such a program is essential. Washington’s stay-at-home order has been extended until at least the end of May, but distancing requirements will likely be in place much longer.

As Governor Jay Inslee’s reopening plan proceeds, there will be an additional competing need for additional street space, again most particularly in our densest neighborhoods: restaurant seating. Restaurants operating under significantly reduced seating capacity restrictions will continue to sustain themselves with a to-go business model, but our streets have the space to provide additional seating near restaurants while still maintaining public health standards.

Seattle’s next round of Stay Healthy Streets needs to include street openings in as many urban centers and urban villages as possible. The residents of those neighborhoods deserve better than everyone pretending that our current street configuration is working for them.