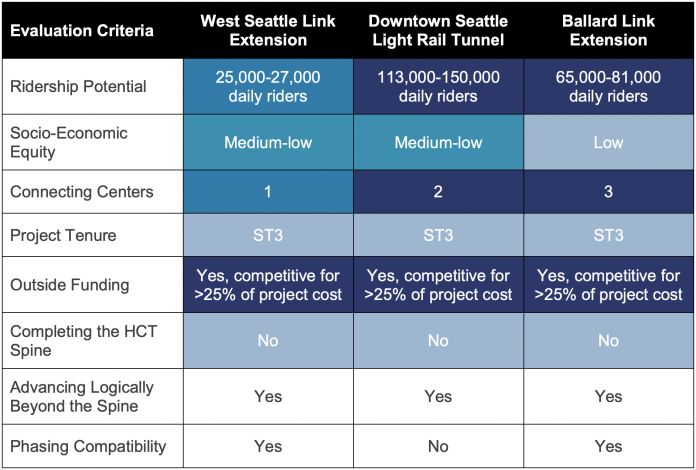 On Thursday, the Sound Transit Board began the Sound Transit 3 program realignment process with a workshop that centered on a briefing by agency staff and feedback from boardmembers. Ahead of the meeting, the agency issued a detailed Program Realignment Board Briefing Book outlining the program affordability issues that the agency faces and strategies and initial criteria and project evaluations to be considered for program realignment. The agency is legally required to ensure that its programs remain affordable within available resources and not exceed debt capacity limits. Unfortunately, a combination of tax revenues falling off the cliff from the pandemic and escalating project costs mean that the program could become unaffordable in the next few years.

Based upon board agreement last summer, there are two divergent approaches that will be used to evaluate alternatives for program realignment to inform board decisions: an expanded capacity approach and plan-required approach. The expanded capacity approach is contingent upon new financing resources, such as taxes, grants, and expanded debt limits that the agency would pursue from state and federal governments and possibly from voters. The plan-required approach does not bank on expanded capacity and instead could involve some or all of the following actions to attain program affordability: delay projects, deliver projects in additional phases, reduce project scopes, and suspend or cancel projects.

King County Executive Dow Constantine championed the expanded capacity approach with a successful motion in June. During the meeting, he made his pitch for his approach. “The voters spoke clearly and frankly they spoke quite strongly, overwhelmingly even in support of Sound Transit 3 across the region,” he said. “I intend to tirelessly advocate for the system they approved, a system that will produce thousands of family-wage jobs, connect our main job centers and academic institutions, provide options to get out of traffic and onto reliable high capacity transit for our people.”

Constantine added, “From where I sit, we can’t afford to simply accept an affordability gap; the region needs a high capacity transit system now more than ever.”

The program realignment process is being driven by grim financial constraints. Sound Transit forecasts that under current circumstances that the agency will collect $5.3 billion fewer in revenue through 2041, which represents an 8% decline. A severe recession could worsen that even further with $11.5 billion (19.4%) revenue drop through the same time period. The latter, however, seems increasingly unlikely in the mid-term.

The balance sheets though are even worse off because of anticipated capital and operations costs that have escalated. Sound Transit has warned the board that project costs have risen considerably in the past year for many projects, but particularly for light rail projects, which is primarily driven by inflated property costs.

The agency said it caught wind of the rising costs in November and thought it prudent to inform the board earlier this month that capital costs have escalated about $8 billion in 2019 dollars ($12 billion in the year of expenditure). On the flip side, agency staff estimate that revenue from grants should improve with an additional $3.2 billion through 2041.

All of this leaves Sound Transit with an $11.5 billion program affordability gap. By 2029, the program would hit the point where projects would become unfunded, the agency estimates, due to no remaining free revenue to be allocated to necessary project expenditures and being tied up in debt payments and operations.

There are some tools that the agency has to raise revenues, but they are quite limited. Sound Transit could impose a rental car tax that would generate $74 million through 2041. Fares could be increased along with expanded and additional parking fees, more advertising, and renting and leasing space to vendors. Fare increases, however, could drive down ridership and increase inequity while new parking fees may raise eyebrows in the middle of a pandemic and not raise that much money. Likewise, there are concerns a rental tax could affect business and tourism to the region, a position that Fife City Councilmember Kim Roscoe expressed–though Auburn Mayor Nancy Backus disagreed and suggested an incremental tax.

Beyond existing tools, Sound Transit CEO Peter Rogoff rattled off a variety of possible additional financing tools that will be explored:

The debt capacity limit increase could do wonders on its on. It would allow for more immediate borrowing to do projects quicker while not increasing effective tax rates. But it would mean higher interest rates on borrowed debt and require 60% voter approval. In 2016, 54.05% voters approved Sound Transit 3 in 2016 and a similar margin in the taxing district rejected Tim Eyman’s Initiative 976 in 2019. Eyman’s initiative would undid some of the Sound Transit 3 taxing authority had it not been struck down in court. Passage of a higher debt limit would likely require careful messaging to reach the 60% threshold.

In addition, the Biden administration seems poised to increase transportation funding, which could make grants and loans easier for Sound Transit. Changes to discretionary funding programs are also likely to change making the process to file applications, line up credit, and obtain approval simpler than the roadblocks that the anti-transit Trump administration threw up.

Not mentioned by Rogoff during his presentation, however, is pending state legislation to allow Seattle to reenact a City Transportation Authority capable of levying a suite of taxes for grade-separated public transportation and existing Transportation Benefit District laws that also grant cities and counties a variety of taxing options.

During the meeting, other boardmembers weighed in with their perspectives on taxation and priorities.

WSDOT Secretary Roger Millar said that the agency might look into seeing if the federal government would be able to convert loans in grants in the same manner as the Paycheck Protection Program, a pandemic economic relief tool, and seek authority from the state to tax ridehailing companies like Uber and Lyft–which happen to directly poach potential transit rider trips.

King County Councilmember Claudia Balducci felt that talking taxes was a premature discussion given that the board has not yet identified any alternatives or the problems that need to be addressed by program realignment. She also warned fellow boardmembers that they should be critical of how project scope changes are made through the program realignment process. One thing that not to fully cutback on, she said, is station access funds that are critical for connecting people walking and biking.

Everett City Councilmember Paul Roberts, however, said that now is the time for dialogue with the Washington State Legislature for new revenue options and changes to state law since the legislative session is underway and expected to wrap up for the year in April. That timeline does not line up well with the program realignment process that runs through July, the month that final decisions should be made. That leaves the board with an odd catch-22.

Both Balducci and Roberts are veterans from the Sound Transit 2 program realignment process in 2008 and 2009, so their insights do carry some weight.

Boardmembers generally expressed consensus that they want to deliver the projects that voters approved in 2016, particularly the regional spine from Everett to Tacoma. Snohomish County Executive Dave Somers said that if comes to making drastic cuts, he would rather break projects into phases rather than cut them entirely.

Boardmembers were briefed on individual project evaluations using the eight board-adopted evaluation criteria approved last summer. The criteria evaluate specific aspects of a project, including rider potential, socio-economic equity, connecting centers, tenure, outside funding, completing the spine, advancing logically beyond the spine, and phasing compatibility. The Program Realignment Board Briefing Book presents these evaluations by criterion and subarea. It also offers an overview of how the criterion rankings apply.

The Everett Link light rail extension is one of the highest performing projects in the evaluation even though ridership is modest. It benefits from being a key component of the regional spine, possibility for third-party funding, connecting many regional centers, and socio-economic considerations. The Ballard and West Seattle Link light rail extensions and the corresponding new Downtown Seattle light rail tunnel also score well, spurred in large part by the connection to regional centers, high ridership, and potential for third-party funding. Curiously, the new tunnel is not considered a part of completing the regional spine–a point that Seattle Mayor Jenny Durkan raised during the meeting–even though it is a necessary component for capacity and reliability for the Tacoma Dome and Everett Link extensions. In years past, there was debate over whether other subareas in the suburbs should help foot the cost of the tunnel.

More detailed breakdowns and information on the evaluations are provided in additional matrices of the Program Realignment Board Briefing Book.