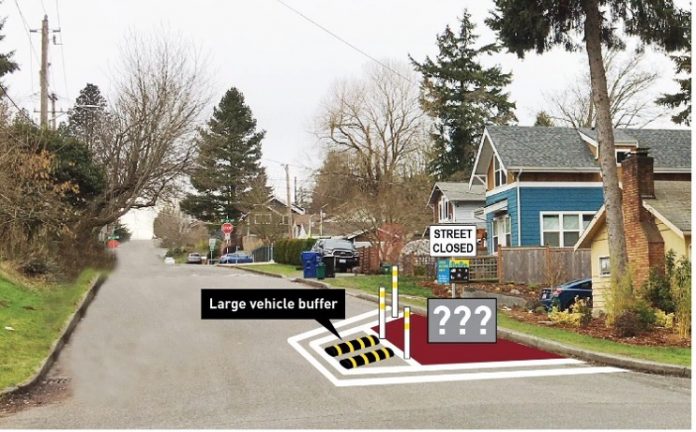 Last May, Seattle made national headlines with an announcement that the Durkan administration would be building on the success of its pandemic-focused Stay Healthy Streets program and making permanent improvements to 20 miles of streets. The Seattle Department of Transportation (SDOT) rolled out Stay Healthy Streets shortly after stay-at-home restrictions were implemented last spring and were expanded across the city, almost entirely on existing Neighborhood Greenways.

Signage on Stay Healthy Street discourages through-traffic and allows people to legally walk in the roadway to more easily distance from others. Stay Healthy Streets are similar to, but not exactly like, Keep Moving Streets that have been created near Seattle’s most popular parks. Branding aside, both are pedestrianized open streets with some accommodations for cars.

One year later, there’s a still a lot we don’t know about what the permanent Stay Healthy Street program will actually look like. One big question is where the funding for these changes will come from. The commitment from the Mayor was made without a funding source identified. Late last year, SDOT proposed to divert funds that had been devoted to the city’s Bicycle Master Plan program, arguing the projects likely won’t have enough funding to be completed by the end of the current transportation levy.

That idea sunk like a lead weight at the Bicycle and Pedestrian Advisory Boards and the Levy to Move Seattle Oversight Committee never took a vote on it. The funds for the initial Stay Healthy Streets rollout, later sign upgrades, and overall program maintenance had come from the Federal CARES Act funds that were not expected to last very far into 2021; it’s possible that the newest allocation of Federal relief funds from the American Rescue Plan could also be used for the program, but the City Council has not hashed that out yet.

The path for the Greenwood project illustrates how SDOT is focusing on identifying individual approaches to making improvements neighborhood-by-neighborhood. At a public meeting focused on the Greenwood Stay Healthy Street last week, which you can watch the recording of online, it was pretty clear just how personally people take changes to streets near where they live. A number of meeting attendees raised issues they have with the street, ranging from concern over people running while wearing headphones, to active street use taking away from the enjoyment of a spring cherry tree in bloom. But a survey from earlier this year showed that out of more than 700 responses, more than 80% of people supported making the Greenwood Stay Healthy Street permanent. But we have to get the design right.

The design issue that will impact all Stay Healthy Streets citywide is the intersection treatment. The permanent design will have to be robust enough to discourage people driving through the neighborhood from cutting through but it can’t stick out into the intersection so much that it blocks sanitation or delivery vehicles. The design proposed by SDOT would consist of a painted curb extension, with plastic bike lane posts, and a segment that is designed to be driven on by large vehicles but increases the size of the curb to discourage other traffic.

SDOT is asking neighbors if they prefer the curb to be filled with a prefabricated design or a custom one: if you’re interested in the future of the Greenwood Stay Healthy Street, you can fill out their survey on the subject. Overall, the design looks like the best that can be expected for most intersections along a Stay Healthy Street in order to accommodate the uses along it. But I know many advocates are also hoping that Stay Healthy Street design can also be an opportunity to add full traffic diverters to improve the walking and rolling experience. Many of Seattle’s existing neighborhood greenways are sparse on these types of traffic treatments, even as they exist in other well-off neighborhoods on streets that aren’t greenways. So far, we haven’t seen any plans that would add more traffic diversion.

SDOT is also proposing curb extensions around stop signs, in order to prevent people from parking cars too close to those signs and decreasing visibility. These could be filled with asphalt or turned into planters.

Apart from these standard design features, SDOT is also planning a significant placemaking element for permanent Stay Healthy Streets that could vary wildly from neighborhood to neighborhood. This is a pretty exciting element of the program, and should enhance the sense of community along the improved streets. But without making the Stay Healthy Streets as welcoming a place as they can be for people walking and rolling, any art or decoration will feel extremely misguided.