Transforming Broadway into a plaza would create a world-class pedestrian space in the heart of Downtown Tacoma.

Urban explorers, or really any attentive pedestrians, are bound to discover glimpses of the past that we tragically destroyed in pursuit of a city designed around automobiles. One such example with an ironic history is a plaque along Broadway in Tacoma, placed in 1987 to commemorate the reopening of Broadway to car traffic. It is, however, never too late to fix the mistakes of the past, and the sooner we do so the less opportunity we have to build even worse systems upon them. There are many benefits to reintroducing such a pedestrian plaza to Broadway that I want to explore here.

From 1973 to 1984 Tacoma had the “Broadway Plaza,” part of a plan in the 70s to retrofit Downtown Tacoma into a glorified suburban shopping center that could compete with the new Tacoma Mall’s abundant parking. Under this plan the dense retail corridor along Broadway was to be preserved and Broadway itself pedestrianized to create an outdoor mall, which was a popular response to retail’s suburban flight among urban planners of the time. However, many of the nearby historic buildings were planned to be sacrificed to build parking to serve this new plaza. Sadly, the plan as a whole only ever succeeded at building several menacing parking garages and failed miserably at actually increasing business. As such the plan was scrapped and Broadway was reopened to personal cars.

The Broadway of today largely fails as a street for car traffic and remains rife with evidence of its brief history as a pedestrian plaza. The street goes nowhere, with a one-way system that only allows traffic to head towards a T-intersection with 15th Street. The roadway has to awkwardly dodge a now-decommissioned fountain that sits directly in its presumed right of way. Though the northern portion above 9th and the southern portion from 11th Street South serve almost exclusively as access to dense angled parking, the central section from 9th Street to 11th Street features only about half the typical street parking due to the abundant sidewalk space, and is already closed to vehicles every Thursday for the weekly farmers market.

My proposal is to create a pedestrian plaza on St. Helens Avenue from where it diverges from Market at 7th Street south to where it meets Broadway, then south on Broadway until it meets 13th Street. The plaza could potentially be extended further south to 15th Street, though south of 13th Street Broadway is exclusively parking and drop-off for Hotel Murano and is nowhere near as inviting or conducive to pedestrian traffic as the dense historic streetscape to the north.

Calculating the cost to construct is kind of difficult given that there aren’t as many examples to create average projections from as with most infrastructure; however, with all the bells and whistles one can comfortably assume it would be in the low millions and possibly less than a million, given that normal street repaving costs around $1 million per mile.

Optimally the space would all be raised to curb height, feature raised crosswalks across each intersection with parallel streets, and have motorized bollards to allow entry of emergency, service, and delivery vehicles. If that solution proves to be cost prohibitive,  installing a cheaper solution of manually lockable bollards across the existing roadway would also work, and it could serve as a good pilot for further expansion. The north end of the future plaza already features Ben Gilbert Park, which when expanded across the roadway would make for a well shaded and inviting gathering space immediately adjacent to city hall, convenient for political organizing.

Students at the University of Washington, Tacoma (UWT) are redesigning a plaza and walkway that connects Broadway to the Commerce Street Transit Center, which is the center of Pierce Transit’s bus network. The southern section intersects with the 12th Street Hill Climb, which is a series of staircases leading from the alley behind Broadway down to 12th & Pacific Avenue. The School of the Arts is a specialized public high school with a campus spread across several buildings along the Broadway corridor and UWT, and an automobile-free route between classes would make for a significant improvement to their students’ safety.

It’s important to point out that the conditions under which the original plan failed have changed. Of the pedestrian mall trend that the Broadway Plaza was a part of, a significant contributor to the success of the few remaining malls and plazas is their vicinity to college campuses. But at the time of the Broadway Plaza experiment, the closest college was the University of Puget Sound, which is more than 2 miles away and already within walking distance of the Sixth Avenue Business District.

However, today the University of Washington Tacoma is located only four blocks from the southern end of the plaza, and is directly connected by the T Link via the 12th Street Hill Climb. However, given the proximity to the campus it should be noted that demand from UWT students may already be fulfilled. The connection to the T link and the Commerce Street Transit Center are also independently valuable assets to the success of such a project.

As for potential business concerns, many business owners object to pedestrianization efforts on account of the reduction in parking. However, scientific studies show that increasing pedestrian space increases foot traffic which in turn increases sales.

A total of 176 parking spaces would be eliminated, with the potential to add roughly 10 spots along Market Street and five spots along Opera Alley once St Helens is closed. Of those, 38 of these spots are in an off-street paid parking lot that is only accessible from Broadway, though the owners should have little issue selling or redeveloping given the current real estate market in Tacoma.

There is space in/on nearby garages and streets to accommodate the lost street parking, but if such a concern persists, the city could redevelop one of several surface parking lots west of the corridor into a parking garage. Such a garage could be built underground, taking the form of a 5-over-1 at the surface to be used as public housing or municipal office space, with a candidate surface lot behind the southern section possibly also providing space for an expansion of the 12th Street Hill Climb to Market Street.

I have yet to even touch on the obvious long-term health and climate benefits of expanding pedestrian infrastructure in Downtown Tacoma, or even smaller benefits like outdoor restaurant seating; the potential benefits of this pedestrian corridor are numerous. The City of Tacoma could fairly easily provide a world class pedestrian space connecting city hall, the convention center, numerous hotels, and many local restaurants and bars, with a firm connection to the regional rail transit system. The sooner we fix the mistakes of the past the better our future can be, so why don’t we give it a try? 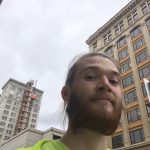 Jeremiah Thomas is a resident of Downtown Tacoma with a deep interest in improving the region’s urban form and walkability. He works as a Union Concrete Carpenter and is excited by the opportunities to actively participate in building a better landscape. As a regular transit rider, his proudest work has been for Sound Transit's subcontractors, most prominently including the concrete staircases for the new Judkin’s Park station.