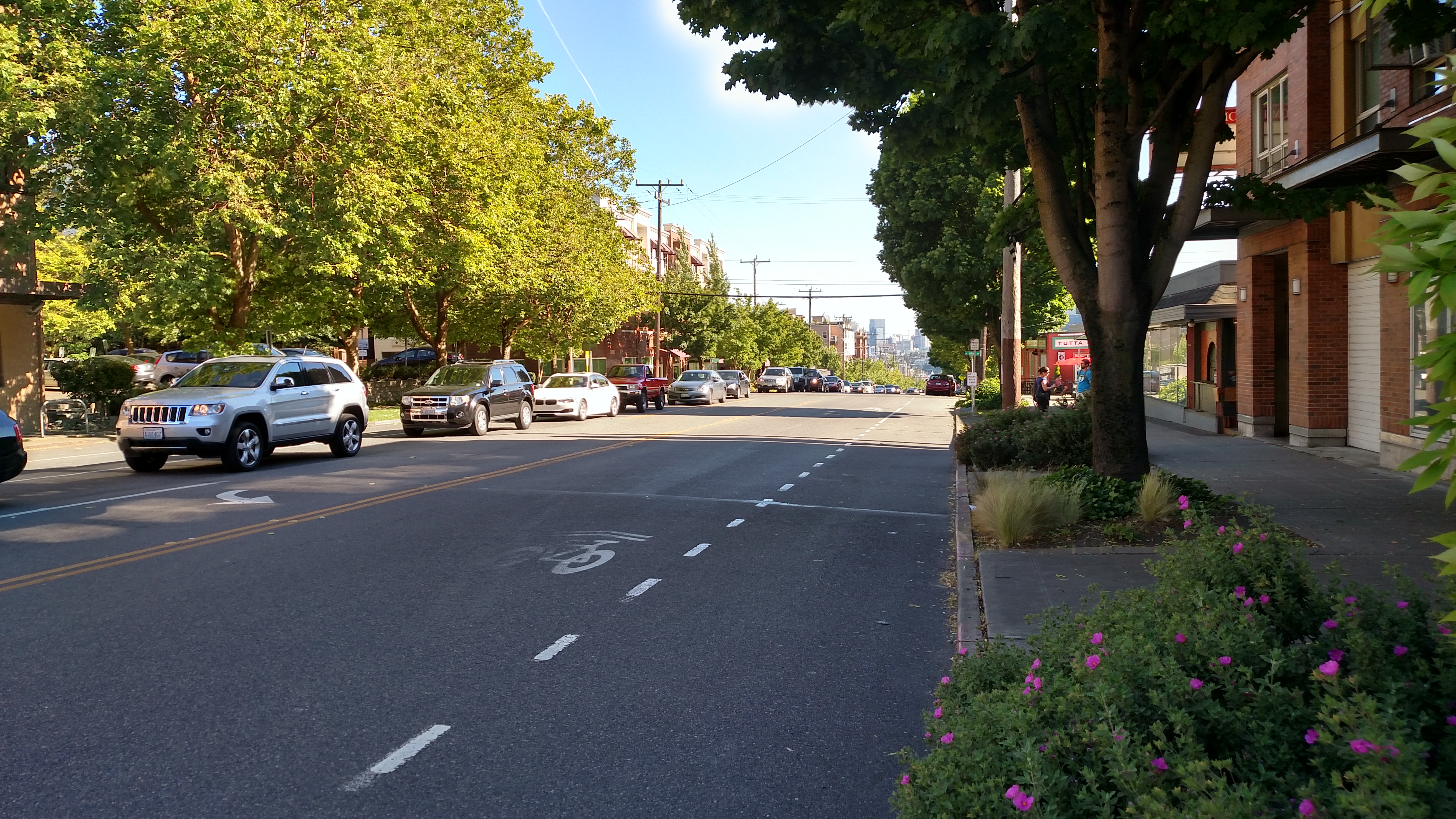 Wallingford is an idyllic neighborhood, but it’s dealing with issues typical to much of Seattle: transportation woes, skyrocketing housing costs and an elevated risk of pedestrian, bicycle and motorist injuries on its streets. Broadly speaking, Wallingford should seek to become a more multimodal neighborhood with stronger transit, better bicycle infrastructure, and safer and more enticing pedestrian spaces. Moving people more efficiently by fuller using more modes would allow Wallingford to continue to grow without getting paralyzed with gridlock.

Here are seven ideas to improve the public realm in Wallingford:

The idea is to connect Green Lake (and the bike trails there) to the Burke Gilman Bike Trail with a protected bike lane (PBL). Two options come to mind: One is to turn the existing bike lane on Stone Way into a protected bike lane by putting it on the other side of the parking lane and adding bollards and intersection treatments. The other is to instead take advantage of the also quite wide but less busy Woodland Park Avenue to put in a PBL.

The Bicycle Master Plan (still not finalized and apparently on hold) acknowledges these options and seems to be thinking along similar lines. As of now, the draft doesn’t endorse a full protected bike lane on Stone Way, but the route considered a “local connector” with “minor separation.”

The big changes seem to be planned just to the west at Woodland Park Avenue where a neighborhood greenway is planned. Woodland Park Avenue is very wide for a lightly used neighborhood street, which likely is related to its history of hosting a streetcar line before it was dismantled with the ascension of the automobile. Not only is Woodland Park Avenue wide, it also is due for maintenance judging by its bumpy, cratered surface that is presently a menace for unsuspecting bicyclists (my friend hit an especially deep pothole here and went over the handlebars breaking his collarbone. He’s fine and back on the saddle now). This overdue maintenance presents a golden opportunity to re-envision the transportation and green space mix on the avenue. Or at the least stripe some bike lanes so the travel lanes aren’t 15 feet wide.

2. Upgrade and Maintain The Burke-Gilman

The fact that the Burke-Gilman Trail is Seattle’s best bike trail sometimes blinds us to how it could be much better. Some areas have gotten very bumpy and need to be repaved. We also need to improve intersection treatments. In Wallingford, some intersections are a mess with bumpy crossings and jarring curb cuts. The standard should be for clearly marked intersections (bright green paint) with a preference for table top intersections so that instead of dipping down to the road level, the Burke is flat and the road rises to meet the crossing in a table top intersection (basically a big speed bump for crossing motorists and a smooth ride for bicyclists).

One busy intersection where the Burke-Gilman crosses Stone Way is also more congested that it needs to be. Clear up sign and utility pole clutter to increase the usable sidewalk width and do a much wider curb cut so that bicyclists and pedestrians both have enough space. Sloppy intersections are also a big problem to the east.

This would most help folks in Southwest Wallingford but could potentially relieve bus overcrowding in routes throughout the area. I wrote extensively about that here. Bruce Nourish also covered this same idea for Seattle Transit Blog three years back. Adding a RapidRide E stop is the lowest hanging fruit for bus upgrades and wouldn’t be very expensive.

Other than RapidRide access, higher frequency is key to reliability for Wallingford bus routes. It will interesting to see how ridership is doing after the latest restructure. For example, will the newly created Route 62 will perform similarly to the Route 16 or does its Dexter Avenue routing sacrifice too much speed versus the former Aurora Avenue routing? As the neighborhood grows and become less car dependent it will become more crucial to augment weekend frequency so car-free residents can still get around.

45th Street gets a ton of pedestrian traffic but it can get a little hairy as motorists speed through this busy area coming to and from I-5. We should reduce the speed limit to 25 miles per hour to discourage speeding and add a scramble intersection at Wallingford and 45th. All along the street, cross walks should be a regular feature rather than limited to a few places.

5. Rail: Advocate For The Ballard Spur

The Sound Transit 3 (ST3) package is firming up and it doesn’t appear the Ballard Spur will be on the project list. Downtown to Ballard via Interbay is though and transit advocates are still pushing for a tunnel instead of a moveable bridge. Not only is this the most reliable option, it also provides the City with an opportunity to fund an extension to Fremont, Phinney Ridge, and Wallingford via the Ballard Spur subway. What we need to do is make sure the Ballard Spur is included as a provisional project with a full Environment Impact Statement (EIS). That will make the project shovel ready should Seattle locate funds.

The preliminary study puts the Wallingford stop at 45th Street and Meridian, with another stop near 45th and Aurora Avenue. Essentially that would bring the entirety of north Wallingford into the subway’s walk shed. The Ballard Spur would provide transit users in the corridor an astronomical improvement over the plodding Route 44. One potential funding mechanism that could help secure funds is impact fees to the new development that will come near the stations.

One HALA recommendation for zone-wide increases from C-40 and NC-40 to 55 feet would help Wallingford accommodate more residents more efficiently in less area. Plenty of opportunities exist to fill in gaps in the urban streetscape on 45th Street, and, if we redevelop here, we should do it right. Developers can get an extra story with HALA and another with existing incentive zoning. Six or seven stories with some units set aside for low-income tenants would be a nice improvement.

The largest buildings make the most sense on key corridors best served by transit and laden with amenities. Away from the main streets, more modest density will make more sense. Some rowhouses and townhomes are already going up where zoning permits, and hopefully that type of modest density will be allowed throughout the Wallingford Urban Village after the City works through the HALA recommendations.

Gas Works Park is outside the urban village but also seeing some fairly large projects going in, including a near-completed office building called NorthEdge. Tableau has rented out the whole building with space for 1300 employees and that fact alone appears poised to supercharge the local economy for years to come. For Wallingford to not build housing to keep up with its local office boom would likely cause housing cost to spiral even further out of control. We have to find a way to accommodate more people.

7.  Remove The Diagonal Portion Of Green Lake Way To Restore The Grid

One stumbling block for pedestrians and bicyclists trying to circulate around northwest Wallingford is Green Lake Way N, which is unmitigated car sewer with no controlled crossings between Whitman Avenue and Stone Way. The width of Green Lake and lack of parking or traffic calming encourages speeding and traffic routinely moves above 40 miles per hour rather than the posted 30 miles per hour.

Removing a major street, even if only a third mile portion of it, might be too radical for SDOT. However, it would transform pedestrian connectivity in the neighborhood. Currently nobody likes the way that the 5-way intersection at Green Lake Way, Stone Way, and 50th Street functions. In fact, the city voted it the worst intersection of 2016. If that intersection was a simple 4-way stoplight, everybody would benefit, from people trying to walk or bike to Green Lake park to motorists wanting a shorter interval at the light. I suspect you would find some of the trips on the route would disappear as motorists find other routes to cut between SR-99 and I-5 and points in-between. Our carcentric design is inducing demand.

If we are able to pull off such a revolutionary move, we would open up five parcels currently occupied by car sewer for development. Since the city owns the land, it could use it or maximum public benefit. Social housing would be a great fit in such a high amenity neighborhood. The city could establish a pedestrian only trail along the diagonal. Removing a major road might be far-fetched (perhaps even more so than a freeway cap over I-5 at 45th Street) but it would make the area a lot more pleasant to walk around.