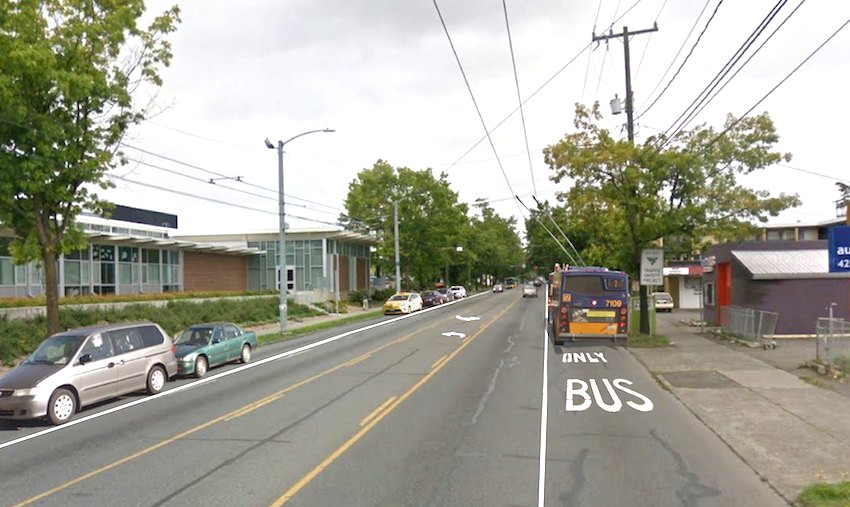 As King County Metro, in coordination with the Seattle Department of Transportation (SDOT), begins its outreach on a planned RapidRide line to replace the current 7 on Rainier Avenue, SDOT also quietly announced that it is moving quickly with the second phase of safety improvements along Rainier Avenue, though Hillman City and Rainier Beach. After almost a year of review, SDOT has decided not to construct a protected bike lane along Rainier through those neighborhoods, citing lack of community support, and is instead moving forward with a bus lanes on a segment of Rainier Avenue, leaving people who walk and bike along the corridor with nominal improvement.

The first phase of safety improvements, completed in 2015, rechannelled a segment of Rainier though Columbia City’s main business district from two lanes in each direction into one, with a center turn lane added. But it also widened the traffic lanes from eleven feet to twelve, which studies suggest may have the opposite of the desired effect on vehicle speeds. Andres Salomon crunched the numbers last year and found that many drivers were still travelling well over the speed limit post-road-diet. 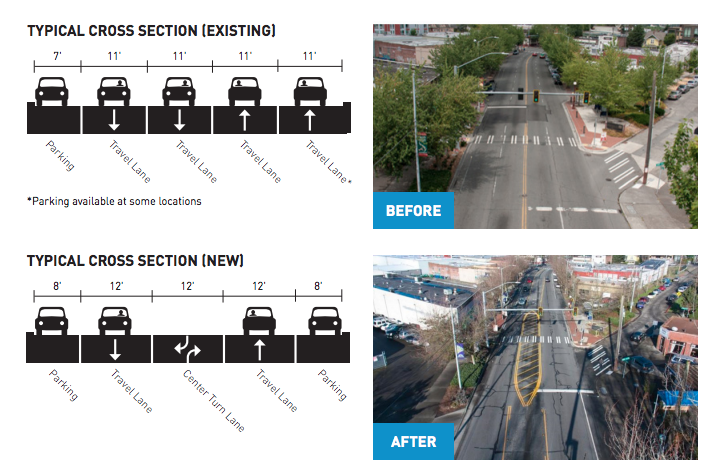 Initial collision data shows a promising trend line from the astronomical 95 collisions per year average over the past 10 years to a level that’s slightly less astronomical (80 per year since the change). The project area, while a marked improvement from the way it was before, is certainly not the model of a safe Seattle arterial now.

What is worth noting is that with the rechannelization, overall traffic volumes along Rainier, including on the segment of the street north of the area where the changes were made, have gone down. What is even more noteworthy is that along Martin Luther King Jr Way S, the closest north-south alternative, traffic volumes have gone up more than they have gone down along Rainier: average daily traffic at MLK and Edmonds Street has gone up by 8,765 vehicles per day, but at Rainier and Alaska it has only gone down by 5,868. SDOT’s report provides a clue as to why this may be: “This diversion is accepted as positive since MLK is under-capacity and better suited for freight traffic and through travel”, the report states. In other words, perhaps MLK’s excess capacity is actually inducing demand to drive there.

Many SDOT employees, including Vision Zero head Jim Curtin, have confirmed the agency’s goal of moving a significant portion of Rainier’s vehicle traffic to MLK and pointed to the long-planned Accessible Mount Baker project to accomplish that shift. With southbound traffic volumes much higher than northbound, this will have a dramatic effect on traffic everywhere on Rainier south of Mount Baker. Expected traffic volumes after Accessible Mount Baker mean that King County Metro does not anticipate needing dedicated bus lanes on that part of Rainier Avenue.

Alternative 1 would essentially extend the same street treatment that has already been completed in phase one: two lanes in each direction would be converted to one with a center turn lane, but a northbound bus lane would also be added. Again, based on the projected volumes post-Accessible Mount Baker, a bus lane is not needed here long term, but in the near-term it would allow the 7 and the 9 to bypass additional congestion SDOT modeling projects with the rechannelization.

Alternative 2 would add a protected bike lane along the corridor in both directions, four and a half feet wide, with one travel lane remaining in both directions. At bus stops, transit islands would be constructed. In between stops, because there isn’t enough remaining space for another travel lane or bus lane, parking would be added where currently there is none.

The traffic study confirms that Level of Service, the outdated measure of travel delay on an A to F scale, is one of the main factors that lead to the department’s conclusion. According to the engineering study, alternative 1 would only result in a minimal degradation of vehicle times. The report states: “all the half signals would operate at LOS B or better and all the full signals would operate at LOS C or better. The intersection that would experience the highest increase in delay is S Othello St where the delay would increase by 34 seconds per vehicle resulting in a degradation of LOS from B to D”. On the other hand, “While the Alternative 2 configuration would have a slight impact on northbound GP traffic operations, its impact on the southbound general purpose traffic operations would be substantial. This substantial increase in corridor travel time is largely attributed to a combination of factors such as roadway capacity reduction from the rechannelization configuration and bus blockages introduced by in-lane bus operations.”

In other words, a northbound protected bike lane will have minimal impact on travel times in the corridor, but it is the southbound lane that would cause delays because buses can only stop in their lane and traffic levels remain the same. What is not clear is how much traffic would need to divert to MLK in order to reduce that delay, but the extreme delay that the engineering report suggests would result from Alternative 2 clearly would divert many drivers: the traffic study suggests that a trip from one end of the study area to the other would go from just over 15 minutes to 33 minutes.

The traffic study concludes that with alternative 2 “the intersection LOS would degrade to LOS E or worse at six signalized intersections. Compared to the Alternative 1 rechannelization configuration, Alternative 2 would further reduce roadway capacity by adding PBL and result in a significant increase in travel time and delay.” Apart from the fact that a protected bike lane would add a different type of roadway capacity to an area that lacks north-south bike routes, the scenario laid out that assumes no further traffic diversion than what already occurred after phase 1 is on its face unlikely. But we already know that the plan is to divert traffic to MLK, which SDOT considers desirable.

The question here is will alternative 1 be able to calm the street enough to dramatically reduce roadway collisions and therefore injuries? Southbound, the traffic lane for general purpose traffic will be 12 feet, more than enough space to allow a driver to safely speed up between intersections without worrying about the parking lane adjacent. Northbound, a bus lane that will be empty often, particularly off-peak when traffic volumes are lower, will also create a tempting space for drivers to speed up. A protected bike lane, apart from creating a buffer for pedestrians along Rainier, will create a significantly different feeling for drivers, introducing visual cues to drive slower even when traffic volumes are low.

Rainier Avenue’s collision rates are so off-the-charts crazy that any improvement looks like a success. But what does Rainier Avenue look like in the long term? Will the improvements that happen now become stepping stones along the way to a mutimodal Rainier Avenue that shows Seattle the way to implement Vision Zero along one of its most dangerous corridors? Or will today’s interim solutions, driven by the same standards around vehicle delay that have guided our choices for the past several decades, simply lead to us spinning our wheels on Vision Zero? That’s the question that lies ahead.