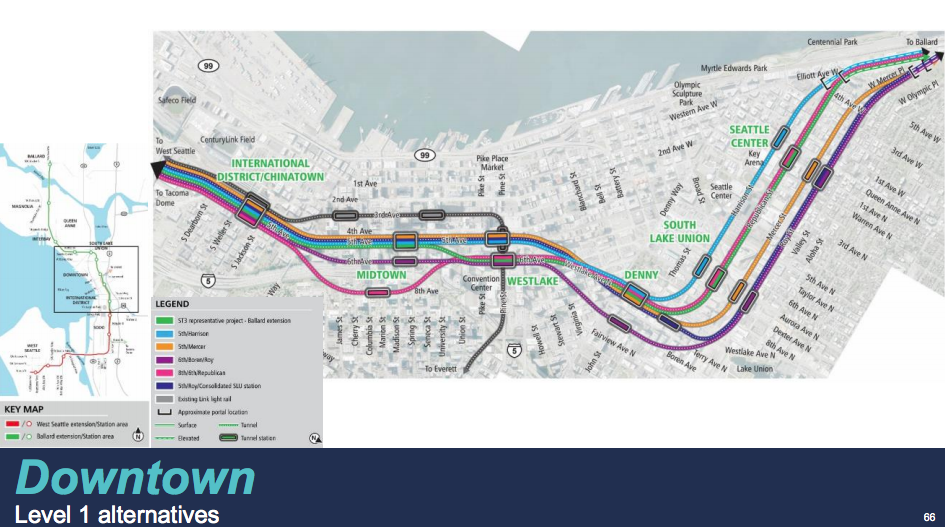 On Tuesday night, Sound Transit presented its first crack at alternative corridor alignments for the West Seattle and Ballard light rail extensions. The Stakeholder Advisory Group was briefed on the comprehensive evaluation of Level 1 Alternatives, which suggested that Sound Transit is open to alternatives that could consequentially deviate from the representative project alignments shared in February.

In developing the Level 1 Alternatives, Sound Transit considered the public feedback provided during its month-long comment period and series of open houses. Over two thousand comments were submitted to the transit agency, including dozens from local and state governments as well as local organizations, which have been summarized in an early scoping report. While those comments reveal some interesting themes, the Level 1 Alternatives themselves point to likely paths that Sound Transit will pursue as the transit agency moves into the Level 2 screening process in the coming months.

Sound Transit went through an extensive presentation outlining four key segments under review through the alternatives process. These segments are divided into West Seattle/Duwamish, SODO, Downtown, and Interbay/Ballard. Evaluation of each segment is provided in several forms. Sound Transit has highlighted each of the key alternatives being screened based on public feedback in consolidated and individual diagrams. Each alternative is then evaluated using common performance measures, such as service reliability, regional connectivity, land use consistency, and constructibility issues. Finally, Sound Transit ranks the alternatives based upon these various factors potential viability.West Seattle/Duwamish Segment

The West Seattle West Seattle/Duwamish segment is poised to connect the Alaska Junction, Avalon, and Delridge areas to a SODO alignment via a water crossing of the Duwamish with up to three stops. Sound Transit has outlined five alternatives in addition to the baseline representative project alignment which would deliver stop in Delridge, Avalon, and Alaska Junction and be fully elevated. Some of the key takeaways from the evaluation include the following:

Aside from the representative project alignment, Sound Transit has ranked the Oregon Street/Alaska Junction (orange alignment) and West Seattle Bridge/Fauntleroy (navy blue alignment) alternatives with the most potential. The Oregon Street/Alaska Junction alignment is a practical alternative that would provide good connections for RapidRide C and H Line interception in Avalon and Delridge, respectively. It would also better southward extension in the future and serve local land uses well now and in the future. The West Seattle Bridge/Fauntleroy alternative, however, would not connect as well with the RapidRide H Line and would lie in a less active industrial and maritime area. The Pigeon Ridge/West Seattle Tunnel alternative does not appear to perform as well given that it would require substantial tunneling and have one fewer stop, but is still considered a borderline case with potential.

The SODO segment appears headed for a fairly straight alignment from Spokane Street to International District/Chinatown Station. Only two alternatives have been evaluated for the segment in addition to the representative project alignment. The differences between the alternatives are as follows:

Sound Transit has ranked the Surface E-3 alternative with the most potential aside from the representative project alignment. It’s peculiar that this ranks well given that it would that not provide Ballard riders with access to a Stadium Station stop with out transferring. The Massachusetts Portal alternative does not appear to perform as well given some challenges, but is still considered a borderline case with potential. It’s still early in the process though and with any luck Sound Transit could consider another alternative entirely, specifically the concept of a 1st Ave S/4th Ave S corridor with a stop at Union Station.

The Downtown segment will run from South Downtown to the edge of Uptown via South Lake Union. Sound Transit has evaluated five competing alternatives in addition to the representative project alignment. The ideas presented in the alternatives present very different objectives. For instance, the representative project alignment would take a weaving corridor along Fifth Avenue and Sixth Avenue while the First Hill alternative (pink alignment) would bring light rail to the lower slope of the neighborhood between South Downtown and the retail core. The key takeaways from the alternatives are as follows:

Sound Transit’s evaluation suggests that the 6th/Boren/Roy alternative may have high potential for good performance as an alignment. The alignment would bring light rail further east in the central business district and intercept the Madison BRT line. A Denny stop would also be located further east providing some good separation from a stop on Aurora, reduce duplication of the South Lake Union Streetcar, and provide good opportunities for connections to local bus service. However, it would situate light rail further away from the heart of Uptown by putting a station on Roy St and 1st Ave N.

Likewise, the 5th/Harrison alternative (baby blue alignment) could have high potential. It closely mimics the representative  project alignment and provides a very direct route through the city center. The corridor could provide good connections to Madison BRT, buses on Denny Way, and offer a closer transfer at Westlake Station.

Meanwhile, the evaluation was fairly pessimistic about the 5th/Roy/Consolidated alternative since it would involve fewer stations, a longer alignment, and challenging sloping transition near Kinnear Park. Notably too, Sound Transit’s evaluation effectively waived away the First Hill alternative due to the station not being consistent with the Sound Transit 3 plan, a slightly longer alignment, and challenges with tunneling under I-5.

With the most number of alternatives, the Interbay/Ballard segment presents a wide diversity of options traversing Interbay to reach Ballard. The evaluation looked at six alternatives to the representative project alignment. Big questions considered through the evaluation included: how to cross Salmon Bay (fixed bridge, movable bridge, or tunnel), how light rail should be threaded through Interbay (15th Ave W, 20th Ave W, or existing railway right-of-way), and where to terminate the corridor in Ballard (Old Ballard or East Ballard).

Alignments that tended to rank best were bridge options. Sound Transit’s evaluation gave high marks for the Elliott/15th/16th/Fixed Bridge alternative (purple alignment), which would terminate at NW Market St and 15th Ave NW. The alignment essentially mimics the representative project alignment, except that the Interbay stop would be on 16th Ave W and include a permanently fixed high bridge. The alignment, however, would skip Old Ballard and could create inconvenient local bus connections for the Interbay stop. On the other hand, it would be aided by direct connections to heavily used routes like the RapidRide D Line and Route 44.

The West of BNSF/20th/17th/Fixed Bridge alternative (orange alignment) was a runner-up despite being a longer alignment and prominently serving Magnolia. Though there is consequential densities there with additional potential, but the proximity to pockets of new mixed-used on Dravus and the stop in Old Ballard likely drive a lot of the value in the alignment. Additionally, the alignment would avoid conflicts with Fishermen’s Terminal and the interchanges near Elliot and 15th Ave W.

Finally, Sound Transit also ranked the East of BNSF/14th/Movable Bridge alternative (baby blue alignment) as having real potential. The alignment is fairly distinctive for its use of at-grade rail along the existing railway corridor, Smith Cove Station located closer to the Magnolia Bridge, swooping jog east of the Nickerson/Emerson interchange with elevated rail, and terminus in Ballard’s industrial district. The wisdom of those project elements, however, is questionable. For starters, the movable bridge would permanently hinder the reliability of the whole Green Line and future extensions that pass through Interbay. The terminus stop has little development potential. The Smith Cove stop would miss out on good options for transit connectivity but might offer a very small carrot to higher intensity redevelopment near the armory. And the crossover of 15th Ave W would likely require significant displacement of residents in multifamily housing.

Unfortunately, the tunnel options did not perform as well the primary bridge options, but two of them did fall into borderline territory. The best of the two is the West of BNSF/20th/17th Tunnel alternative (navy blue alignment) which effectively is the same as the West of BNSF/20th/17th/Fixed Bridge alternative, except that it would be tunneled north of W Bertona St and have subterranean stop just south of NW Market St between 17th Ave NW and 15th Ave NW. The arrangement of the tunnel could easily queue up future extensions north to Crown Hill and Northgate as well as east to Fremont and the University District.