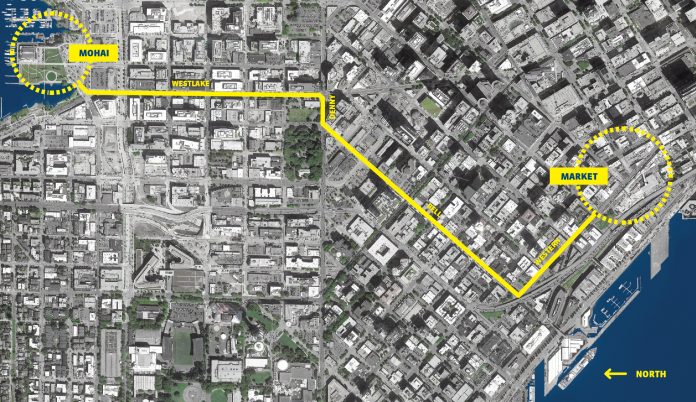 A pedestrianized Ballard Avenue and protected bike lanes on Roy Street in Queen Anne were some of the street safety improvements dealt a setback this week. The Neighborhood Street Fund projects that received the most votes were revealed to the Move Seattle Levy Oversight Committee this week, and the members of that committee will be tasked with selecting which ones actually get built.

There is one caveat: the Seattle Department of Transportation (SDOT) could still eliminate projects that it deems “infeasible”–in which case a runner-up would move forward. In addition, the Levy Oversight Committee may decide to select additional projects that may offset some of the inherent inequity of the district-council based prioritization system, or prioritize those project ahead of others.

The Levy Oversight Committee also discussed the possibility of prioritizing highly-rated projects ahead of the final Neighborhood Street Fund cycle under the levy that would be scheduled to start in 2022.

In all, there were over 6,750 votes cast on the online ballot which asked people to select their favorite three projects in each council district. But the voters online skewed white, 50 years old and up, and were most likely to be voting for projects in District 6. Because this is not representative of the city as a whole, there were additional events held around town and ballots were available at Seattle Public Library branches in order to reach a broader segment of the population. This succeeded in getting around 10% of the total votes cast for Neighborhood Street Fund projects overall, but SDOT is giving projects ranked highly by that additional outreach special attention.

The three projects with the most votes for each district were:

Improvements at Yesler Way and 23rd Ave S were also ranked high among the more diverse group of project voters.

Crossing Improvements at 9th Ave NW and Leary Way were rated high at the outreach events.

The total budget available for projects this cycle is around $4 million to $5 million, so selecting high cost projects may mean fewer get built overall. Ultimately, the need is much greater than the available funds and this very strange process (that is certainly not cheap in itself) is a questionable use of levy funds after the scaling-back that has occurred in other programs. Rather than trying to balance it out with forced equity considerations, perhaps starting from the point of equity in the first place makes more sense.