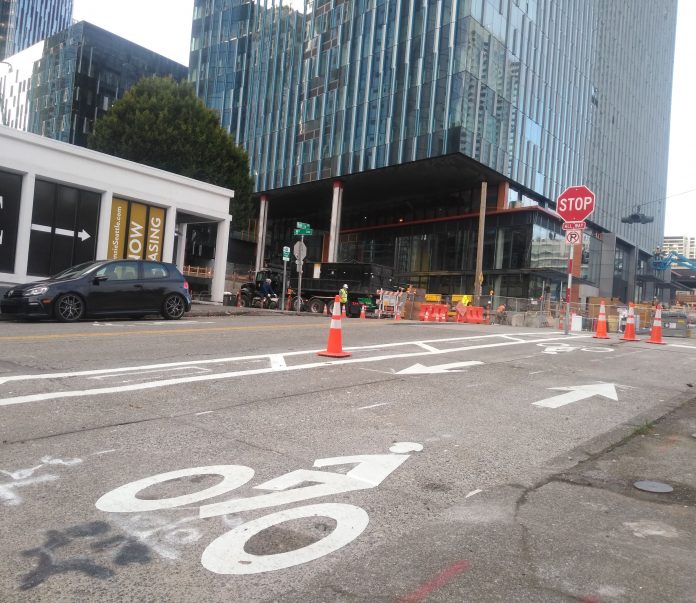 Seattle Mayor Jenny Durkan’s proposed 2020 budget heeds the call of the Move Seattle levy oversight committee and street safety advocates by adding more funding to complete bike projects: over $8 million for protected bike lanes and $2 million for neighborhood greenways. These one-time funds come from the sale of the Mercer Megablocks.

The budget proposes spending Megablock funds on other projects in the Vision Zero bucket, including $650,000 on pedestrianizing NE 43rd St outside the soon-to-open University District light rail station and $2.3 million on crossing-the-roadway improvements from the Pedestrian Master Plan.

Using other funds, the Mayor proposes to add 90 blocks worth of dedicated bus lanes, including along Rainier Avenue. The Move All Seattle Sustainably (MASS) coalition had asked the City to accelerate rollout of bus lanes, especially on planned RapidRide corridors that were in funding limbo or delayed like Rainier. This takes us a step in that direction.

The budget proposal allocates 20% of the Vision Zero priority funding to a single intersection in West Seattle, a project long envisioned as a roundabout at the tricky intersection of Highland Park Way SW and SW Holden St. This project has been seeking funds from the Washington State Department of Transportation and multiple rounds of City of Seattle grants (including two rounds where the project was not selected for Neighborhood Street Fund projects) but has been unable to secure funds.

The Bicycle Master Plan and Pedestrian Master Plan projects haven’t been selected yet. Rather than a decree from the budget, those projects come from the equity-focused selection process. The budget itself states: “These documents contain strong equity components, driving capital investments toward neighborhoods that are historically disadvantaged.” The Seattle Department of Transportation (SDOT) has now heard from community members at multiple open houses, as well as from the bicycle advisory board, in order to decide which bicycle projects to move forward. They also have heard from the city council, which laid out in a resolution many of the same routes as priorities.

It is unclear, however, how the Highland Park and Holden intersection improvements would rank against other projects in a similar selection process. In both 2016 and just months ago in 2019, the project was passed over for Neighborhood Street Fund grants, likely due to the high price tag associated with the project. In 2016, the cost was pegged at $1.3 million, with notes for the project suggesting a lower-cost design: “Instead of paving in concrete, pre-cast curbing and asphalt will be used.” In other words, this project is proposed to be functional more than aesthetically pleasing.” It also notes: “This roundabout would be the first ever constructed in Seattle.”

By the 2019 Neighborhood Street Fund process, the cost had gone up to $2.7 million for a design that was no longer a roundabout, but a traditional intersection more squared off than currently exists.

The project description created by SDOT also includes a five-year collision history for the intersection, for 2014 through 2018. It shows that over that time, there were only 11 injury collisions, none of which were reported as serious. As the report itself notes, this collision history is average for intersections in Seattle.

Like every place in the city, no collisions at this intersection would be the goal. But the data showing this spot in the middle of the pack for collisions, with few serious injuries reported, begs the question of how it was prioritized to the top of the list to receive these one-time funds being allocated to Vision Zero.

On Friday, SDOT will be presenting more information on next year’s budget to the city council, with changes almost certainly to come to the plans for these one-time revenues as the council enters their long budget process toward voting on a final budget during the week of Thanksgiving.

Pulling out funding for a long-demanded project from West Seattle drivers at Highland Park Way SW might prove politically tricky, however, now that the Mayor has announced that her office intends to fund it. We will know more in the coming weeks. What is clear, is that the Mayor is clearly listening to advocates who are telling her to make Vision Zero a higher priority. But that victory will be short-lived if it’s only buoyed by one-time funds, and not accompanied by a culture shift at City Hall.

We are in the midst of our fall subscriber drive. Please consider becoming a monthly donor if you enjoy coverage like this.