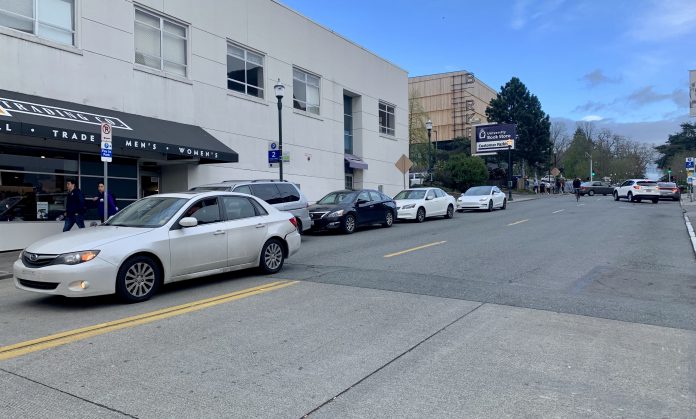 After a long process around what the front door of Sound Transit’s University District station on NE 43rd St will look like at the start of transit service there in 2021, the latest designs reveal that Seattle will have to wait for another street to become its first full pedestrian-priority street in front of a rapid transit station.

Competing demands have led to the current design, including the desire to run buses down NE 43rd St for direct station access, the desire to provide access to the parking garage at the University Bookstore, and the amount of space that the Seattle Fire Department says it needs for access on the street.

The newest design includes an 11-foot westbound lane that will be shared by people on bikes, King County Metro buses, and for a segment of the street general purpose vehicle traffic. An eastbound bike lane will provide cyclists a way to bike in that direction, but despite cross-sections showing posts delineating that lane, the Seattle Bicycle Advisory Board this week was told that a new kind of alternative delineation, flush with the street, will be attempted here. We don’t know exactly what it will look like, but it’s definitely not clear if it will be a deterrent to people driving cars in the bike lane.

The street will remain open to all vehicle traffic westbound between 15th Ave NE and University Way NE (The Ave), despite the fact that there are no vehicle outlets between the alley on the block and The Ave. From the project website, we are told this is to “maintain vehicle access to the local post office, the University Bookstore, and the University Temple United Methodist Church.” That church’s leadership is currently in the process of redeveloping their own property, which will lead to the demolition of the current church and the construction of two highrise towers above a single podium, but the plans do not include any vehicle outlets on the NE 43rd St, a “green street.”

In a response to public support for pedestrianizing the entire street, NE 43rd St will be recreated without curbs, with a similar treatment to E Denny Way in front of Capitol Hill Station or Bell Street Park. Sound Transit, however, is planning curbs on their portion of the street in front of the station.

The Seattle Fire Department has also vetoed a design for a more compact transitway, allowing more room for bikes with the planned bioswale acting as a buffer. The department said it needed twenty feet of full clearance, which they now have with one foot of the proposed furniture zone filling this out.

The transit-only street will run from Brooklyn Ave NE, where Sound Transit is currently constructing a protected bike lane directly adjacent to the station, but it’s not clear where people on bikes would go after that–there are no bicycle facilities on Brooklyn Ave NE north of busy NE 45th St. One block over, 12th Ave NE is a designated neighborhood greenway but this means very little without any traffic diversion.

The sidewalks on NE 43rd St are planned at 12 feet and 14 feet, making them an appealing alternative to sharing the street with buses for people biking to the station.

Advocates have long called for The Ave to be closed to general traffic, a charge that District 4 candidate Shaun Scott has taken up. At this point, NE 43rd St is not directly paving the way for that, though the compromise reached here–allowing direct transit access to the station while leaving the door open to closing the entire street in the future–might keep the door open for a pedestrian-and-transit Ave. For now, NE 43rd St looks like another grand idea on paper that has succumbed to the forces of compromise in our car-centric street network.