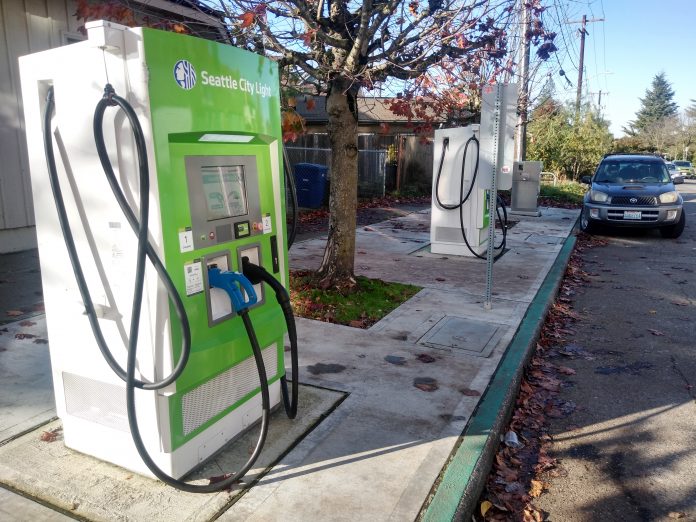 Six individual users accounted for a full one-third of all sessions where electric vehicle (EV) users charged their cars at Seattle’s only public EV charging station through early October, according to information obtained from Seattle City Light. Of the 2,982 sessions logged between January 2018 and October 2019, 1,029 sessions were logged by the same six people, with 404 of those accrued by the top user. Only around 400 unique people were logged as using the station since the beginning of last year.

In its first year of operation, the Beacon Hill EV charging station, located directly adjacent to the Beacon Hill light rail station, went thirteen non-consecutive days without being used at all. Since it opened, the average number of charges per day has hovered around five, with the busiest day ever seeing 18. With an average charging time of 35 minutes, that translates to most days seeing fewer than three hours of total use, with 21 hours idling. The parking spaces in front of the chargers cannot be used if someone is not charging up.

The Beacon Hill station is still the only EV charging station that Seattle City Light has installed in the public right-of-way, despite initial promises that 18 more would follow by the end of last year. Seattle City Light now says these will be installed by the end of 2019, with an additional six funded via next year’s budget. A proposed charging station on Broadway was not supported by community groups, who questioning the need for a charging station directly adjacent to a light rail station, and in the path of a planned (but unfunded) protected bike lane. Another plan for a charger at Gas Works Park was also cancelled. It’s safe to say the rollout of this program has been bumpy.

With only 6,700 personal electric vehicles registered in the city as of the time that the Beacon Hill charging station opened last year, out of around 450,000 total personal vehicles, a slow start to usage for the public charging station program is to be expected. But with new legislation requiring that virtually all new development with parking in Seattle also have EV charging equipment in place, and hundreds of EV chargers already accessible to the general public on private property, it’s worth looking at the level of investment required to continue to expand chargers in our scarce public right-of-way.

Seattle City Light cites costs of around $200,000 for each pair of charging stations planned next–in the Central District and West Seattle’s Alaska Junction. Usage fees at Beacon Hill only garnered around $12,000 in 21 months, meaning the station wouldn’t recoup its initial installation costs with fees at point-of-charge for more than 25 years. So at this point, subsidization by Seattle City Light is necessary to sustain the program, which might be considered acceptable to the city to further the goal of EV ownership. But with so many competing priorities vying for scarce street space, it’s not clear if EV charging demand is enough to keep expanding the program.

The City of Seattle has a goal of growing electric vehicle ownership to 30% of all vehicles by 2030. Since EVs accounted for less than 2% of cars in Seattle last year, this is not a realistic goal except coupled with a massive decrease in the number of overall cars. Even if the number of overall vehicles did not increase, the number of EVs would need to increase by nearly 30% every single year to hit that goal. But for the past decade the number of vehicles in the city grew about as fast as the population did, which is not sustainable.

A limited number of on-street charging stations likely play a role in the future of our transportation system. But the paradox is that placing these stations in areas of highest utilization means they compete most with other better uses for that same street space. Beacon Hill should be treated a pilot for how the program should proceed. At this point in time, it’s far from a success.