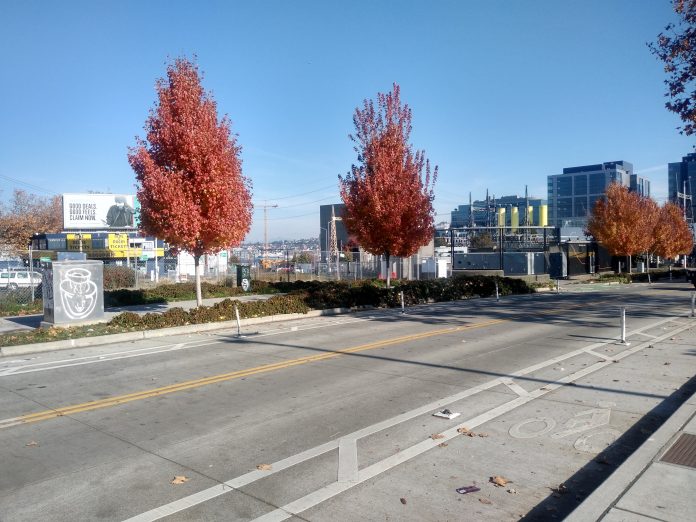 Thomas Street in South Lake Union east of Seattle Center will get several substantive modifications by the end of 2019 to make the street function more like a neighborhood greenway. Additional changes are scheduled to be implemented by the time the renovations to the Seattle Center Arena are complete in 2021.

The most noticeable of these will be the complete closure of the nearly half-block east of 5th Avenue N to cars and trucks, calming the first block of travel adjacent to Seattle Center by installing curb barriers outside the crosswalk and marking off the space between the current protected bike lanes as “interim public space.” Drivers will still be able to access the McDonald’s parking lot, which is slated to be redeveloped in the coming years and its street frontage worked into the concept for the longer-term Thomas Street Greenway.

At Dexter Ave N, by the end of the year another traffic diverter will be installed, restricting vehicles from going straight across Dexter from either direction of Thomas Street and banning left turns from Dexter onto Thomas. This will also be a big safety improvement for people biking, walking and rolling on Dexter.

Perhaps more notable than this interim improvement is the fact that Dexter and Thomas is slated to become the site of Seattle’s first protected intersection, in which people walking and biking are fully protected from turning vehicles by concrete curb islands. These intersections, popular in Europe, have been slowly gaining traction in the US, but, until now, Seattle did not have plans to install one. The protected intersection will be installed along with a full traffic signal (currently absent) and is scheduled to happen by the targeted opening date of the Seattle Center arena project: summer of 2021.

These two improvements are small steps toward completing the full Thomas Street Concept Plan, which is heading toward 100% design. The Mayor’s proposed budget for 2020 included $2 million from the sale of the Mercer Megablock, and the city council has added to that amount during its budget deliberations, with six councilmembers expressing their support for the project (all of the ones present at the time).

The traffic diverter at 5th Avenue N would become public space under the longer-term street concept plan. Seattle City Light is planning on utilizing a portion of its 1% for arts fund to improve the streetscape in front of its Broad Street substation on Thomas Street, adjacent to where the Seattle Center skate park is planning to relocate to, on the former Broad Street itself, now vacated. The interim public space planned on Thomas for this year would ultimately become an extension of Seattle Center, where vehicle traffic would be restricted but where people walking, biking, and rolling would enter and exit Seattle Center itself.

Currently the Washington State Department of Transportation is rebuilding 7th Avenue N (formerly Aurora Ave N) and installing a full traffic signal at Thomas Street that will, like the planned Dexter intersection, include a diverter prohibiting vehicle traffic from going straight across 7th, requiring a right turn. That means between Dexter and 5th any vehicle traffic will have had to turn onto Thomas from another street in order to be there, and will be forced to turn shortly thereafter.

Thomas Street is envisioned in the bicycle master plan as connecting all the way from Elliott Ave and its connection to the Elliott Bay Trail to I-5 and possibly beyond. This segment is being accelerated to improve bicycle connections to Seattle Center in advance of the arena renovation.

There is not any plan, however, to delineate any space for people biking in Seattle Center itself, which can become crowded particularly after events. The arena’s mode share goals only plan on 2% of arena visitors arriving by bike, a low floor that it seems likely to demolish as travelers seek alternatives to sitting in traffic after hockey games and concerts, particularly assuming that Seattle still has bikeshare operators in 2021.

On the west side of Seattle Center, Thomas Street will serve as a connection between planned protected bike lanes on Queen Anne Avenue and 1st Avenue N. Republican Street will also serve as an east-west neighborhood greenway connection, but it’s not clear how much traffic diversion will be included in the project on that side of the arena project.

The immediate improvements coming to Thomas Street between 5th Avenue N and Dexter Avenue have the makings of a real pedestrian and bike priority corridor, to be fleshed our fully in the coming years. On a side note, credit for shepherding this plan through the government process should be provided to likely District 6 councilmember-elect Dan Strauss, who worked on the project from Councilmember Sally Bagshaw’s office.

Seattle Neighborhood Greenways has a petition supporting the budget additions that are being considered this month that would significantly move the project forward. You can add your name here.

You can learn more about the interim improvements here.