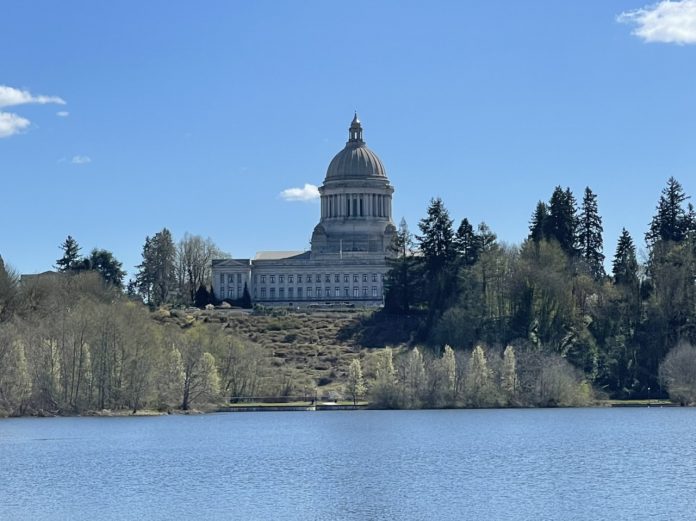 But legislature’s “grand bargain” complicates the picture and may tie bills to highway expansion package. Sign our letter to oppose that.

Last Thursday, the Washington Senate cleared two hurdles that had dogged them for years, finally approving a low-carbon clean fuels standard and leveling a price on carbon emissions from major emitters via a cap-and-trade scheme. The Clean Fuels Standard (HB 1091) will likely head to conference committee to iron out difference between the Senate and House version. The carbon pricing bill dubbed “Cap and Invest” (SB 5126) is moving its way though the state house now and had its first public hearing scheduled for 8am Wednesday in the House Committee on Environment & Energy.

In comments before the vote, T’wina Nobles (28th District, University Place) expressed reservations about the cap-and-invest bill, but said she voted for it to advance the “grand bargain” intended to pass both a major transportation package and a suite of climate bills this year. She added she hoped the house would improve the Cap and Invest bill.

Front and Centered, a coalition of racial equity and environmental justice organizations, has opposed the cap-and-invest bill, as has Mayoral candidate Andrew Grant Houston. Puget Sound Sage, the nonprofit vice transportation chair Rebecca Saldaña (37th District, Seattle) formerly led before winning office, is a Front and Centered member and a longtime opponent of cap-and-trade systems including Cap and Invest, which they argue amount to a permit to pollute in marginalized communities of color, don’t invest in the right priorities, and don’t decrease emissions fast enough. The oil giant BP has endorsed Cap and Invest after spending $16 million against I-1631 which would have imposed a carbon fee.

Senator Saldaña co-sponsored the Cap and Invest bill but is also pushing her HEAL Act (SB 5141), which passed the House on April 10th and is headed for conference committee. HEAL seeks to bring an environmental justice approach to state agencies and direct them to “use an intersectional lens to address disproportionate environmental and health impacts in all laws, regulations and policies with environmental impacts.” The bill would establish an Environmental Justice Council to further that work. The aim is to invest in marginalized communities suffering from pollution impacts.

The Clean Fuels Standard would tackle Washington’s top source of climate emissions, the transportation sector, which account for 45% of state climate emissions. Representative Joe Fitzgibbon (34th District, Seattle), who is lead sponsor on the bill, stressed the need to keep up with other climate leaders in the region and act with urgency to stave off climate catastrophe.

“It is long past time for Washington to join our neighbors in Oregon, California, and British Columbia in reducing greenhouse gas emissions from the transportation sector,” Fitzgibbon said in statement after the house passed the bill. “We owe it to future generations to protect the climate, improve our air quality, and create jobs in the biofuels industry. Washington can be a leader in clean fuel production, but we are falling behind our neighbors. This bill protects our climate, cleans our air, and grows clean energy jobs. This program is overdue, but it’s not too late for us to do our part.”

The Clean Fuels Standard vote was nearly purely along party lines, except for Democratic Senator Steve Hobbs (44th District, Lake Stevens), who joined Republicans in opposing this climate bill that Governor Jay Inslee has made one of his top priorities this year and last. The bill would establish a Clean Fuels Program that would limit greenhouse gas emissions per unit of transportation fuel energy to 10% below 2017 levels by 2028 and 20% below 2017 levels by 2035.

The Senate inserted some attempts at poison pills into the bill to force a highway package in and water down the standard, Rich Smith reported in The Stranger. Democrats Mark Mullet (5th, Issaquah), Annette Cleveland (49th, Vancouver), Van de Wege, Steve Conway (29th, Tacoma), and Hasegawa sent a letter to Fitzgibbon threatening consequences if the House strips out their amendments. Those five would be enough to block a second vote.

“But the five Democrats who signed the letter will block all that from happening,” Smith reported, “unless the House maintains the following provisions:”

• “Ensure that this policy does not dramatically increase the cost of fuel, which is a burden that will likely fall on consumers and disproportionately impact those who can least afford it.”

• “Ensure that Washington State benefits from the jobs created by the additional money that will be spent by consumers on low carbon fuels. This includes new biofuel facilities in Washington and an assurance that some of the crops used to make those fuels come from our state.”

• “The bill must maintain a link to the transportation package.”

• “Maintain the legislative review beyond the 10% threshold so that elected officials can weigh the efficiency of the policy after implementation.”

Unfortunately those measure may undermine the bill and the fuel cost issue appears fairly spurious. “Over the phone, Rep. Fitzgibbon said preserving these four provisions from the Senators would render the bill ‘unworkable to the point that it would never be implemented,’ but said the House will ‘try to find other ways to reassure them that we can meet their interests if not the letter of what they wrote into the bill,'” Smith added.

Senator Hobbs, who chairs the Senate Transportation Committee, has opposed the bill for raising fuel costs without pumping revenue into his Forward Washington transportation package (SB 5483), which continues to be a highway-focused climate-delaying mess, as were iterations from 2020 and 2019. While he wasn’t chair at the time, Hobbs was the ranking Democratic member when the 16-billion-dollar Connecting Washington package was hashed out in 2015, which was also highway-centric and invested a pittance in transit and bike and pedestrian infrastructure.

Senate Democrats have chosen to elect Hobbs as transportation chair three years running even though he has opposed their efforts to pass groundbreaking climate legislation and progressive tax reform. He sought to turn carbon fees into highway-expansion rather than investing that revenue in eco-friendly infrastructure or environmental justice measures that would look to undo decades of environmental racism that have tended to put busy highways in communities of color. He continues that approach by skimming flexible cap-and-invest revenues for court-mandated fish culverts instead of using gas tax revenue, which is more limited in its ability to fund transit and multimodal infrastructure. Rather than weaning the state off its car dependence through smart multimodal investments, Hobbs has proposed tolling transit buses and suggested taxing bikes to scrounge up more money for highway expansion.

That blast from the freeway-building past senator has been entrusted with the transportation package in the Evergreen State does not inspire confidence. However, the compromises implied in the grand bargain (and potentially written into the bills) would suggest the transportation package has to pass for Cap and Invest to go through, and since Hobbs is the 25th vote, he conceivably could pull his support to scuttle the bill if the House attempts to amend the Senate version.

The predicament has left progressive transportation advocates and climate groups in a weird spot and has split the community somewhat. Transit could sorely use the investment to roar back from the pandemic, and the state is woefully behind on its Target Zero goal to end road deaths by 2030. The House package (HB 1564), which has been dubbed “Miles Ahead”, proposed record-breaking state investment in transit and boosted multimodal grants — though a similar amount of highway investment is planned. However, with Hobbs appearing to control the path through the Senate, it’s not clear Miles Ahead can go anywhere, or that much of the highway pork could be stripped out of the bill.

Front and Centered has come out against the Miles Ahead in its current iteration, arguing for more multimodal investments. Likewise Anna Zivarts made the case against Miles Ahead and Forward Washington on behalf of the Disability Mobility Initiative, arguing the bills leave the disabled community behind.

Transportation Choices Coalition (TCC) has urged passage of a transportation bill this session and Advocacy Director Kelsey Mesher said in her latest dispatch that TCC would be “testifying in support of increasing the multimodal investments to match the House proposal.” On Cap and Invest, Mesher wrote: “TCC will be advocating to ensure that any transportation revenues generated from carbon pricing be dedicated to carbon reduction strategies only, such as multimodal transportation and electrification.”

Join us in sending a letter to state legislators

The Urbanist Editorial Board, for our part, has advocated for no new highway lanes joining the call from Front and Centered and Disability Mobility Initiative. Adding highway lanes will not solve congestion — the evidence is clear. But highway expansion pollution and climate impacts are all too real. We can invest in the future by investing in walkable communities, regional bike networks, and world class frequent transit. That’s why we created a letter-writing campaign to urge state legislators to reject Senator Hobbs’ Backward Washington approach. Send a letter here. Only takes a minute.

Additionally, folks can weigh in on the Forward Washington bill via the legislature’s online form or sign up for testimony as more public hearings are announced. Submit a comment here for the House’s Miles Ahead proposal.