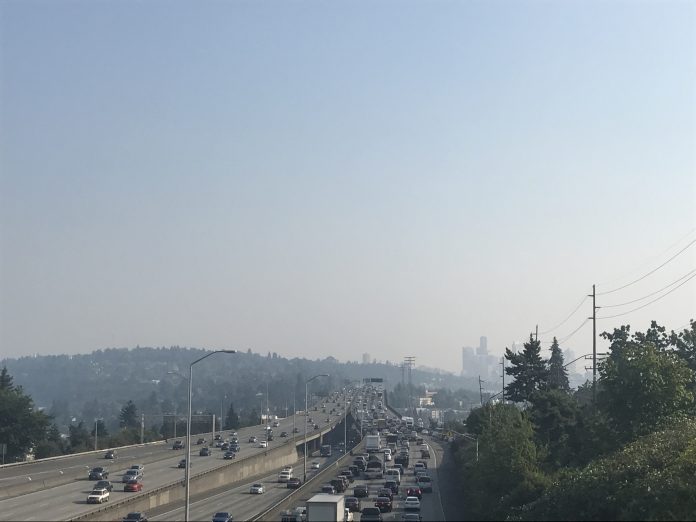 In the state legislature last week, Senator Steve Hobbs (D-Lake Stevens) held a listening session on a slate of long-term transportation funding and investment concepts. New funding ideas include statewide transportation impact fees on development, a flat $15 carbon fee per ton, and a 1% sales tax on bikes. The concepts could eventually find their way into legislation this year as part of a new statewide transportation package that would commit the state to spending about $16.2 billion over 10 years.

“This is not a bill, it’s not a bill, there is no bill number. This is a concept, an idea,” Senator Hobbs said. “There is a lot of demand from communities all over the State of Washington, and I’ve heard from many of you and I traveled around the state. So, I put a list of the items that the community wants–from Spokane to Bellingham to Vancouver. Vancouver has a small need, I guess, down there, and I put it on there.”

The last time a large transportation package passed was in 2015 after much handwringing by Senate Republicans, who controlled the Washington State Senate in a split legislature at the time. This time around Democrats control all levers of power, but it is not clear that the results will be any better with so little carbon-free transportation investments.

No Love for Low-Carbon Transportation

A small nugget also in the transportation package is a proposal to spend $29 million to widen lanes and add a crossover center lane on the Aurora Bridge in Seattle. Pedestrian and bike facilities would be added below the bridge deck. A cheaper and less structurally fraught solution would simply be to reduce lanes–which are not currently necessary by the way as the viaduct shutdown has shown–on the bridge to achieve a similar objective. Why spend so much money on an octogenarian bridge that is nearing the end of its engineering life and soon needs to be replaced–and hopefully with a light rail or least center-running bus rapid transit supporting bridge?

However, there is some hope that there will be a small sliver of non-car-focused funding in the mix. The transportation package would contribute less than 6.3% of the total funding to bike, pedestrian, and transit (excluding ferries) investments, about $100.5 million per year for the whole state:

Starkly missing from this list, however, is funding to dramatically invest in large-scale grants for transit capital programs (e.g., Community Transit’s Swift and Sound Transit’s Link expansions) and the passenger rail programs. With state legislators stuck in a car-first mindset, a $16.2 billion transportation pie gets cut up like Swiss cheese very quickly, leaving little room to give multimodal transportation options the level of investment they deserve.

It is possible that some additional funding for pedestrian, bike, and transit projects could be funded by other sources, such as the Transportation Investment Board and County Road Administration Board, but the amounts there are still relatively small. Meanwhile, the highway pork barrel spending starts first and foremost with Senator Hobbs’ own district since the US Route 2 trestle widening is the largest line item, consuming more than a tenth of highway capital investments.

The transportation package does make some environmental investments, such as stormwater ($500 million) and removal of fish barriers ($3.5 billion) like substandard culverts. Together, these account for about 25% of all funding.

Washington State Ferries recently released a long-range plan that looks out 20 years. It primarily concerns itself with replacing aging ferries and converting the system to hybrid-electric propulsion. Though a modest expansion plan, it requires $6.5 billion in investments to be realized. The transportation package would continue to vastly underfund the ferry system, only kicking in $1.67 billion dollars. This means the state would have to play catch-up in future years if the plan is ever to work. Barring that, the ferry system would simply have to reduce its services despite robust ridership growth.

The transportation package would come with approximately $17.1 billion in new revenues. The bulk of this would come from a carbon fee with remainder being drawn from 21 other sources. The big funding sources include:

The proposal also comes with other notable taxes and fee sources, including:

Senator Hobbs hopes to address several issues that he sees as key with new transportation package, including:

With luck, the first two policy objectives will be nixed even if they are meant to buy “bipartisan” support from climate change-denying Republicans in the state legislature.

During the listening session, the Senate Transportation Committee heard from dozens of interest groups and individuals for and against new funding. Most speakers rose in favor of the transportation package concepts overall, though with some reservations. For instance, trucking groups generally favored new taxes and fees, even on their members, but had concerns about some types of immediate fee increases and opposed any carbon taxes and low carbon fuel standards.

Kicking off the public testimony, perennial anti-tax initiative booster Tim Eyman gave full-throated opposition to any new funding options for transportation. He raised a litany of complaints over car tabs, revenue increases in past legislative sessions, and panning the listening session as a “taxapalooza tax hearing.”

Eyman’s current initiative to defund transportation projects and programs, including a large portion of Sound Transit 3, by cutting all manner of car tab fees is awaiting consideration by the Washington State Legislature. Democrats in control of the legislature, however, are almost certainly guaranteed to decline enactment of the initiative, assuring that it will go to voters in the November ballot.

“We appreciate support for transportation demand management. We would love to see further support both for the foundational Commute Trip Reduction program plus expanded programming,” said Kelsey Mesher, Advocacy Director for Transportation Choices Coalition. “We see opportunity for the CTR program to expand to small business, minority-owned business, employees with non-traditional hours, and others. We also think this could be expanded to non-commute trips.”

“We’re really excited about some of the new funding sources. We’re interested in further exploring the impact fees and how we can use those for transportation,” said Bryce Yadon, State Policy Director of Futurewise. “I’d also like to call out the fully funding of the state culvert replacement. We know we’re on a deadline, but that is a big deal and we appreciate you pushing that forward and as quickly as possible.”

Yadon further commended proposed investments in stormwater infrastructure and the multimodal transportation account. He was, however, concerned about extension of prohibitions on establishing a low carbon fuels standard.

During the committee meeting, Senator Hobbs emphasized the importance of the environment and its relationship to transportation impacts. He was adamant that his approach to transportation funding is a fair one and warned off would-be Democrats proposing dueling carbon fee bills.

I was against 1631, the initiative that failed last year because first of all, it went to a committee that was unaccountable, the money wasn’t directed by the legislature, some of it went the general fund, and really it wasn’t directed to infrastructure and transportation, and for that matter I believe environmental concerns in the State of Washington.

This is my way to put a stake in the ground that if any carbon policy comes out of the legislature, I would certainly hope that a good part of it goes to transportation. And since almost 50%, nearly 50% of carbon comes from cars. Transportation should be the committee and budget it should go to, so we can handle that.

Despite acknowledging transportation as the primary source of Washington’s greenhouse carbon emissions, Senator Hobbs did not address the clear inconsistencies on the environment contained in the transportation package concept. Approximately 46.1% ($7.9 billion) of the total funding raised would be through a carbon fee while less than 6.3% ($1 billion) of all funding would be directed to walking, biking, and transit investments.

And on top of this all, the proposal includes a petty 1% tax added to the purchase of bikes. As is well documented, biking is one of the least impactful modes with by the far the cheapest and one of the most productive infrastructure investments, and actually delivers a positive return on investment. Taxing a mode that the state should be incentivizing (and perhaps even paying people to do) is reactionary and it is climate action denial.

While there is indeed a need to reinvest in deteriorating roads and bridges, the lavish highway and road expansions proposed are far out of step with a state government that has repeatedly acknowledged the contributions that carbon-based transportation is making to greenhouse gas emissions and global climate change. The expansions are also entirely inconsistent with most of the revenue sources proposed.

Instead, it is time that the state legislature look to a low-carbon future and invest dramatically in walking, biking, and public transportation. State legislators need to go back to the drawing board on a statewide transportation package because these concepts do not deserve passage into law.

Editor’s Note: Ferries were excluded from the pedestrian, bike, and transit data because they are very car-heavy in ridership. Washington State Ferries no longer operates passenger-only ferries.