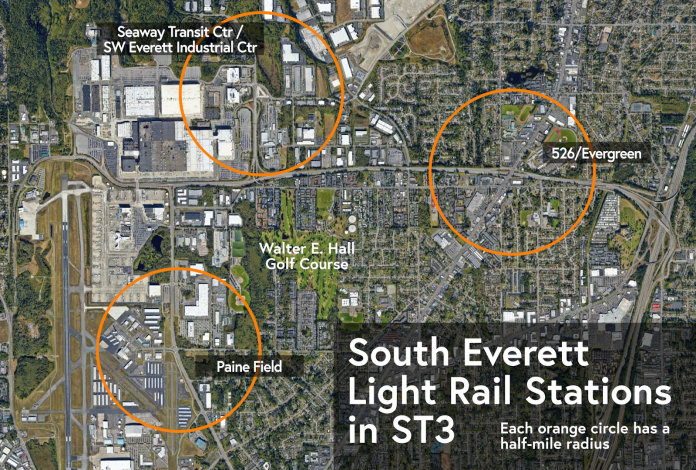 Since the creation of the Sound Transit in 1996, taxpayers of the Snohomish County subarea have had the least realized transit benefit for the taxes paid. With the increase in estimated project costs and reduction of revenues, this could get even worse.

Under Sound Transit 3 (ST3), the agency promised that the Everett Link Extension would open in 2036. The route will both complete the original “spine” of light rail from Downtown Tacoma to Downtown Everett, and connect to the “Southwest Everett Industrial Center” (a.k.a. Boeing) and the new passenger terminal at Paine Field. However, Sound Transit’s new estimates have increased the project’s costs from $6.3 billion to $8.5 billion and the 16.3-mile project will now cost more than $520 million per mile.

It’s time to rethink whether there is a faster, better way to meet the objectives of Everett Link.

Sound Transit should articulate the two separate goals of the Everett Link project and then planning for the appropriate transit technology for each:

For Central Link, Sound Transit determined that building a light rail tunnel to First Hill would pose unacceptable engineering and financial risks. The agency instead funded the construction of the First Hill Streetcar to meet the original promises to voters.

For Everett Link, one option that should be on the table is to keep light rail focused on completing the “spine” to Downtown Everett along the I-5 corridor while serving Paine Field and Boeing with bus rapid transit. The bus rapid transit could either be another Sound Transit Stride line or Community Transit Swift line.

By running on the I-5 corridor and skipping Paine Field and Boeing, four miles would be shaved off the route. Applying the estimated per-mile costs of Everett Link, that’s a potential savings of more than $2 billion. However, the geotechnical design, right-of-way acquisition, and construction are likely to cost less per mile along I-5 since the project would not cross as many developed parcels and roadways, and so the potential savings are even greater than $2 billion.

Approaching Everett Link as one project with two elements (light rail and bus rapid transit), Sound Transit would save $1 billion to $1.5 billion — 17.6% of project costs — and perhaps more.

A key strategic advantage of this approach is that Everett Link could be built sooner.

With a lower cost of Stride, the Snohomish County subarea would have sufficient accumulated funding to pay for the construction of the bus rapid transit immediately. Plus, building bus rapid transit just takes less time — the example of Madison RapidRide G notwithstanding. For example, the SR-522/145th Street Stride line will have taken just eight years from the passage of ST3 to its opening in 2024. Under this same timeline, a Stride to Paine Field and Boeing could be open in 2030, a full six years ahead of schedule, and perhaps two to four years sooner than the delays that Sound Transit is currently considering for Everett Link.

Six to ten years of additional transit service is significant. This is tens of thousands of transit trips serving Paine Field and Boeing at a time when we need to do everything possible to address climate change.

Lowering the overall project costs by $1 billion to $1.5 billion will also make building the “spine” of light rail to Downtown Everett much more financially possible. With lower costs, conceivably the Snohomish County subarea will be able to financially support building light rail to Downtown Everett on-schedule in 2036 with modest federal assistance.

A significant time-savings will be made by eliminating four miles of trackway for people getting from Downtown Everett and parts south.

With the current plan for light rail to both serve as the spine and to connect to Boeing, the Everett-to-Lynnwood project is projected to take 33 minutes and the Seattle trip is projected to take 60 minutes. That’s only slightly better than Sound Transit’s existing Route 512 bus that is scheduled to take 64 minutes to run from Downtown Everett to Downtown Seattle.

With a fourth of the miles eliminated from the route, a trip from Everett to Lynnwood might take just 24 minutes, and a trip to Downtown Seattle 51 minutes. That’s time savings of 25 minutes and 15%, which are significant differentials for someone choosing whether to drive or ride transit.

Despite a robust transportation demand management program, the transit commute mode share for Boeing employees in Everett is extremely low. The problem isn’t that it lacks high-capacity transit service — the Swift Green Line and 11 other bus routes serve Seaway Transit Center. The problem is that so many employees live in places poorly served by transit, like Bothell, Lake Stevens, Marysville, Stanwood, and Skagit County, and that their alternative of driving the freeways and parking for free provides a far superior time savings. Building light rail will not fix this problem.

As for the Paine Field passenger terminal, whatever marginal gain there is to getting higher transit ridership by building light rail rather than bus rapid transit, the benefit is overwhelmed by the astronomical greenhouse gas emissions of air travel. It’s just lipstick on a pig.

What is better is to prioritize building complete, compact communities around future light rail stations and serving these communities with the fastest transit possible.

By contrast, Snohomish County has robust transit-oriented development plans for Ash Way and Mariner, and the City of Everett has rezoned the neighborhood around its future downtown light rail station for 22-story mixed-use buildings. These are the communities that will have a strong mix of residential and employment development, generating the highest transit ridership. These are the communities that need to be prioritized for fast, frequent transit service.

As an alternative to a light rail station at SR-526/Evergreen Way, a station should be built at Everett Mall. Like many other malls, Everett Mall has struggled financially and is ripe for redevelopment.

Some residents who live at Ash Way, Mariner, and Everett Mall will work at Boeing or another Southwest Everett Industrial Center employer, but a bus rapid transit line works just as well for them as light rail.

Besides building Everett Link faster and better, the $1 billion to $1.5 billion in savings could also be reinvested in bicycle and pedestrian infrastructure as well as affordable housing.

At Paine Field, the walk from the Airport Road, where the transit stop is located, to the passenger terminal is nearly a half-mile. Savings could be reinvested in widening the sidewalking and adding a raincover and lighting. Protected bike lanes could be added to both Airport Road and 100th Street SW.

Throughout the Southwest Everett Industrial Center, additional shuttle service could be provided to connect people from Seaway Transit Center to the many employers spread out over several square miles.

At SR-526/Evergreen Way, investments could go toward affordable housing and a partnership with the Connect Casino Road coalition for master planning redevelopment of the Walter E. Hall Golf Course, Fred Meyer, and Anderson Shopping Center.

Likewise, at Everett Station, Everett Mall, Mariner, Ash Way, and Alderwood, funding could go toward transit-oriented development and system access improvements that will ensure people can live and work near the future light rail stations.

Even with a $1 billion to $1.5 billion cost savings, building light rail to Downtown Everett may still take longer than the promised 2036 open date. After decades of paying taxes to Sound Transit, these commuters deserve interim improvements.

There’s already a simple solution. The current design of the stops at the South Everett Freeway Park and Ride, Ash Way Park and Ride, and Lynnwood Transit Center add a combined 10 minutes to Routes 510 and 512. That’s a 20% increase in travel time to commuters between Downtown Everett and the University District. By instead building freeway bus stops similar to the Mountlake Terrace Transit Center, we can provide immediate time savings.

By rethinking Everett Link, Sound Transit can both deliver on its original promise to complete the light rail “spine” from Downtown Tacoma to Downtown Everett. By building bus rapid transit to Paine Field and the Southwest Everett Industrial Center, the transit technology would be right-sized to the current and future land use conditions and travel behaviors.

Snohomish County taxpayers have paid into Sound Transit for too long without enough to show for it. It’s time to get something done.